Well it’s about time that Legendary® drops an expansion dedicated to the sexiest man around – The Merc with a Mouth – Legendary®: Deadpool. 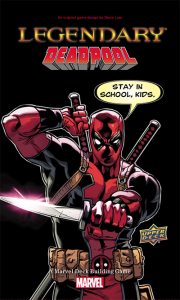 Deadpool is not coming alone. No sir, he even brings his very own super team – The Mercs for Money! These psychos follow him doing his dirty work for a very noble cause – getting paid! They even get their own team icon. 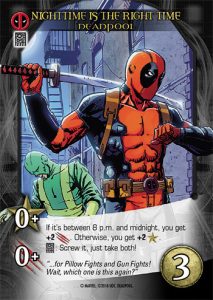 Some say Deadpool is half-good and half-bad. Some say he’s half-nuts. Either way he’s brings some half-crazed cards to this expansion with ½ points. 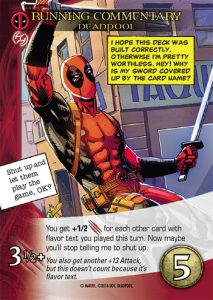 When played, these cards are added up as normal. Play a 2 ½ Attack and a 3 ½ Attack hero, and players are ready to cuddle up to some villain with 6 Attack. 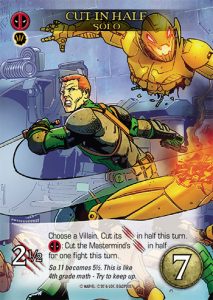 Stray ½ points can’t be spent because there aren’t any cards that cost ½ points. That would be weird.

So join Deadpool and friends this October 12th as they scamper across new schemes, handing out chimichangas and stab wounds. Contact your local gaming store to preorder your copy today.


Does the default Deadpool from the original box change to have the Deadpool team icon, or does he stay without a team?


Officially he’s still without a team, but anything can happen at your kitchen table.


But what about my dining room table? Or card table that I set up in my living room? Or what if I want to play Legendary on my knees in the bathroom while using my squatty potty?!?!


So, does that mean the Deadpool Expension is going to be available at Essen this year?


Yes. One of our distributors, Brave New World, will have it at Hall 7 Booth G116.