If you haven’t heard Brady Kahle’s story, it has all the elements you love about sports, friendship and giving. Brady found out a few months back that his best buddy Landen was diagnosed with cancer. Landen’s family was facing a tough road both emotionally and financially. Brady wanted to help, but as a kid the only thing he had to his name of value were his prized baseball cards. Without hesitation, he decided to sell his cards to help Landen’s family with the medical bills and founded his charity Cards4ACause.

He set up at a couple shows and his heartwarming story caught our eye. With the National Sports Collectors Convention coming up, which is the largest sports collectibles show in the nation, Upper Deck felt we could help out by donating some of the company’s corporate space to Kahle. We even went ahead and created a custom booth for Brady that had the feel of a lemonade stand. Brady and his family made the trek out from Massachusetts and were thrilled to see their space. 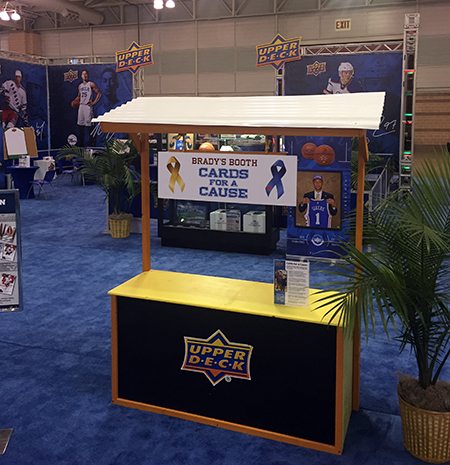 Shortly after the show opened on Thursday, fans touched by his story bought cards and donated items and cash to help out Brady’s cause. So moved was the team at Upper Deck by Brady’s selflessness, the company created a Heroic Inspirations card they presented to Kahle on the main stage of the case breaker pavilion on Friday afternoon. 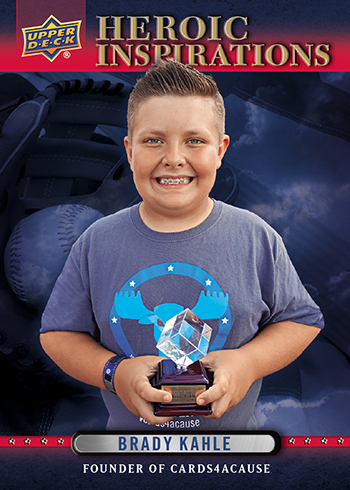 “When we told Brady’s story at the National to fans, they were incredibly moved and inspired to donate,” said Chris Carlin, Upper Deck’s senior marketing & social media manager. “There are sometimes negative stories about sports in the media, we wanted to be a part of a great one. Anytime we can leverage the power of our brand to do some good, we jump at the chance.”

As a sports fan, Brady was like a kid in a candy shop on the show floor of the National. Running from booth to booth, making trades and even buying some cards. He had a blast at the Upper Deck Diamond Club party where he got to meet #1 NBA Draft Pick Ben Simmons. During the show however, his favorite thing to do during his free time was to check out signed wrestling items as he loves the sport.

Chris Carlin reached out to Jeff Rosenberg of TRISTAR who runs the autograph pavilion at the National and told him Brady’s story. Jeff is a cancer survivor and was moved by what Kahle is doing. He let Brady behind the curtain of the autograph pavilion and let him meet some of his favorite wrestlers like Hulk Hogan, Jimmy Hart and Rick Flair. Nate “Tiny” Archibald even popped in with Flair to pay his regards to Brady. 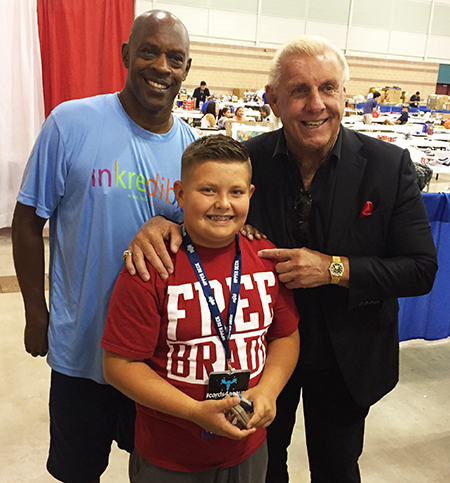 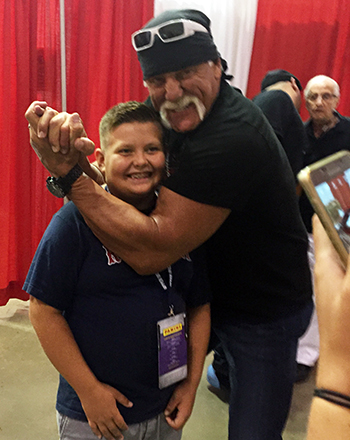 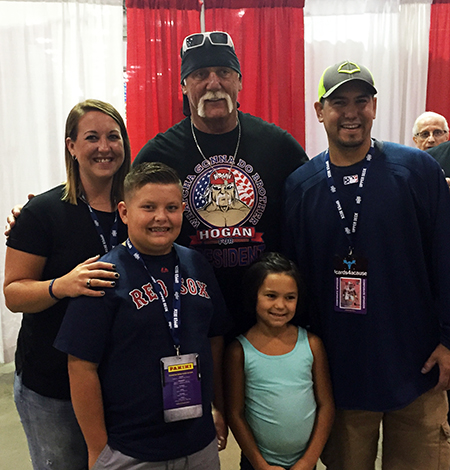 “The past few days have been a whirlwind of excitement,” said Jessie Petig, Brady’s mom. “We have seen so much kindness and support from so many people here at the National. We are so grateful Upper Deck for taking Brady under their wing. I honestly don’t have words to express what this whole experience has meant to us and the difference it is making to Landen and his family. So grateful! ”

Brady plans to keep at it, using this show as a springboard to help his buddy Landen and potentially other kids.

“I think that this whole show has been nuts, my head has been spinning in circles,” said Brady Kahle, founder of Cards4ACause. “I’m excited to see what I can do with the charity and how I can help more kids. I’ll be at the Boys & Girls Club in Chicopee, Massachusetts on August 28, come see me!” 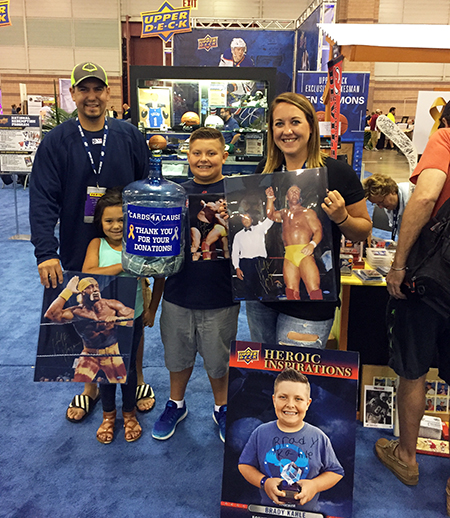 In three days at the National Sports Collectors Convention, Cards4ACause raised well over $1000 and acquired a variety of collectibles that can be sold in the future to help the cause.


Awesome story, I could not make to Atlantic City, I hope Upper Deck brings him to Toronto for the Fall Expo, I will be glad to buy cards or donate to him.