For Zach Sample, Collecting Hockey Cards with Asperger’s has Brought Him Closer to His Dad and Others

We’ve shared before some meaningful stories of how youth dealing with Autism and Asperger’s use trading cards to find their “happy place.” When 19-year-old Zach Sample reached out to us, we were happy to hear that collecting Upper Deck hockey cards had proven to provide a sense of happiness for him as well.

“Children with Asperger’s Syndrome (a high functioning form of Autism) can show signs very early,” said Chuck Sample, Zach’s dad. “’Aspy’ kids tend to be very bright.  I remember Zach before he was three-years-old read the word ‘museum’ on a road sign. His mom and I were completely astounded. Zach’s advanced language skills meant he was able to communicate very early, and actually seemed to be very comfortable around adults – more so than children his own age. When he was in grade school, Zach struggled to socialize with his classmates and was very late in development of fine motor skills. That’s when we knew that something was different about Zach – however, Asperger’s Syndrome was not well known publicly, so the correct diagnosis didn’t occur until several years later.”

“People with Asperger’s Syndrome are very aware of their differences to neuro-typical people. I think that makes it so much harder for them to come to grips with those differences. They see how easily others socially interact and yet find it very difficult to do so themselves. Also, Aspy children can hyper-focus on just one thing for long periods of time – and often thrive in immersing themselves into that ‘one thing’ – enjoying becoming experts (trains, dinosaurs and, yes, trading cards). I’m very proud to say that after a few years in a therapy school that specialized with Asperger’s children, Zach graduated from his local high school with honors and got a full scholarship to Southern Illinois University to study pre-veterinary medicine.”

“When we were living in Massachusetts, my wife, Zach, his younger brother, Ethan, and I went to a minor league hockey game. Zach loved it and wanted to go back. So he and I kept going, and got to know the players a bit. I collected football and baseball cards when I was a kid and really enjoyed it. So, I bought him a blaster box of Fleer Ultra Hockey cards. Some of the players had played on the Lowell Lock Monsters, the team we followed. He loved learning the stats and facts on the back of the cards, so our hobby together began. When he pulled his first game-used jersey card, he was hooked.” 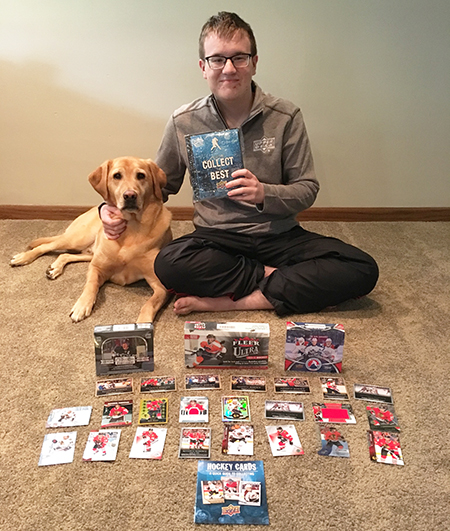 Zach shows off some of his favorite cards along with his loyal dog.

“The wonderful thing about sports trading cards is that it connects you to the world of sports and allows you to share common interests with others (sports and the trading card hobby itself) – and so it can provide a bridge for autistic children to the rest of the world while also capitalizing on their special skills as quick learners and focus. It’s without question one of the most important therapy tools for Zach and something that has been immeasurably helpful in connecting him productively to other people.”

“Collecting trading cards is definitely something we both enjoy doing together. We go to major sports card shows every year and visit Dean’s Dugout in Naperville, IL where the owners, Dean and Marilyn, have been so welcoming and wonderful to Zach. Collecting rookie cards of players we watched at games, following their careers, and collecting autographs and memorabilia cards as they progressed in the NHL was fun for both of us. Most importantly, it connected us in a very special way. Honestly, while Zach does all of the pack openings, I get as much of a thrill as he does when he pulls a special card. After 12 years of collecting, he has quite a collection.”

Zach had some really incredible thoughts to share on the hobby as well. Take a look!

“My first introduction to the hobby of collecting NHL® cards piqued in elementary school after taking a trip with our tribe of Boy Scouts to see a local hockey team,” shared Zach Sample. “We were allowed practically a full tour and a Q and A with the coach at the time Tom Rowe. The ability to not only go and get face to face interaction with players that were in playing and see their transition to the NHL made hockey cards very interesting to me. I was fortunate enough to witness Cam Ward, Eric Staal, and Andrew Ladd play and make their way to the NHL.”

“I feel that I am interested in the organization of the cards and learning all the new player names and learning more about them. A typical sign of Asperger’s syndrome is that people that are diagnosed tend to find one thing that they become masters in. Mine just so happened to be collecting hockey cards and following players. It is especially fun to go to trading card shows and be able to interact with other people in the hobby and get autographs from legends!”

“I am lucky to live in the suburbs of Chicago where I have the opportunity to go to stores, eBay, and the many card shows such as the National that come through the suburbs of Chicago. Finding Dean’s Dugout was really special and we happened upon them almost by accident. They not only offer boxes for purchase but also a wide array of singles and gaming products.” 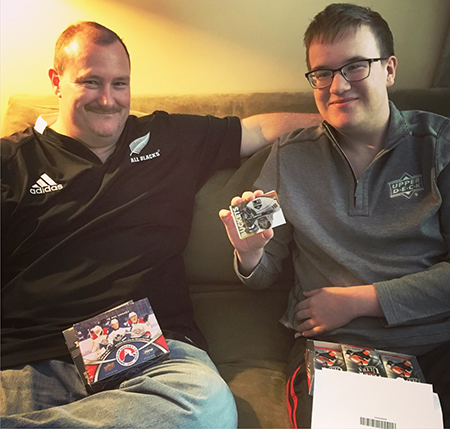 Collecting is a family affair between Zach and his dad Chuck.

“My dad has been a huge supporter of me enjoying the hobby. Whether it would be driving me to card shows to buy singles and get autographs to sitting in the basement with me organizing my cards into binders and even going through all my base cards with me and trying to complete sets which we found a lot of fun in. He has also helped me a lot by framing a lot of my autograph photos and other stuff to build my man cave in my bedroom!” 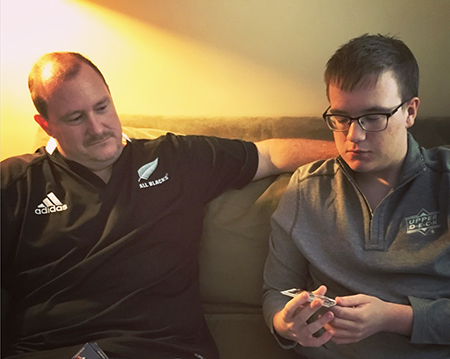 Zach has definitely succeeded in becoming a master collector and his father is very proud with all of Zach’s achievements!

We loved hearing your story Zach and we look forward to seeing you and your dad at the 2017 National Sports Collectors Convention in Chicago! Thanks for your support!