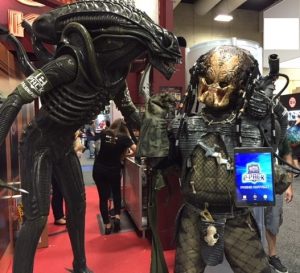 When not in constant battle with the Xenomorphs,

the Ultimate Hunter chases his Aliens on e-Pack!

When you are at Comic–Con San Diego it is not uncommon to see a comic book character drinking a soda, a Sci-Fi villain waiting in line for autographs, or a 7’ monster posing for a picture. But one of the best things to see this year at Comic–Con San Diego was the Upper Deck booth and the release of Alien Anthology™ on e-Pack.

Fans of the movie franchise were everywhere at Comic-Con and the excitement behind the product release was well received! Attendees were literally “on the hunt” for the Comic Con exclusive card that Upper Deck gave out this year. We even had a special signing with Upper Deck artist Randy Martinez who drew the image on the card. 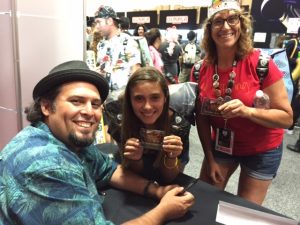 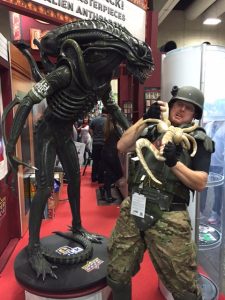 You always have to be careful when you’re looking for Alien e-Pack cards.

A face hugger can jump out of nowhere! 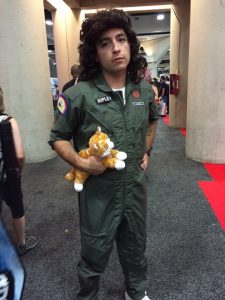 Ripley said to not even think about touching her

With the launch of Alien e-Pack, Upper Deck’s future entertainment releases will attract a larger audience and encourage more collectors from different genres to appreciate movie franchises like Alien Anthology. 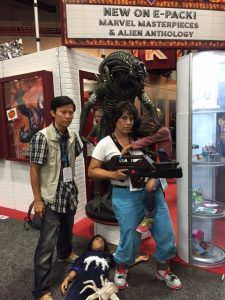 The Alien Anthology films are a favorite for this family. 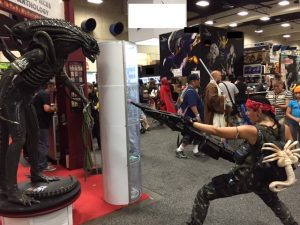 Even Vazquez got into the action making sure no one got

in the middle between her and her Alien e-Pack cards!

If you want to know what all the excitement is about then go to www.UpperDeckePack.com and sign up for a free account. Every day you get a FREE DAILY PACK just for logging on!

“In space no one can hear you scream, but on Upper Deck e-Pack™ everyone screams for Alien cards!”