Vs System® 2PCG™: The Alien™ Battles – We Got Nukes, We Got Knives, Sharp Sticks…

When compared side by side, Xenomorphs are better at fighting than humans. They are faster, usually bigger, and come standard with metal teeth and acid blood. The one constant that have allowed the Humans to stay competitive in a battle is their equipment. Vs System®: The Alien™ Battles introduces a new card type: Equipment. 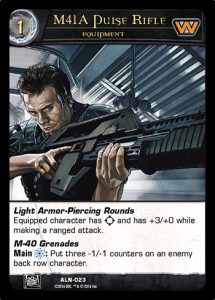 Players can play Equipment during their Recruit Step by paying its cost and putting it onto a face-up character on their side. It doesn’t matter if the character is Main or Supporting, ready or exhausted.

Well, not any character. Some characters have the Creature keyword which means they can’t have equipment. A Xenomorph running around with a Pulse Rifle seems like overkill. 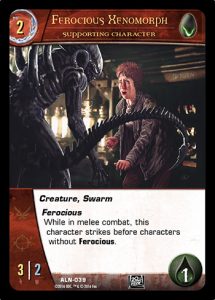 We hope you enjoyed today’s preview. Tune in next time for a swarm welcome.


This first Equipment card is very exciting. The power level of this card (+3 atk buff) is something that has been sorely lacking in the Plot Twists released so far.

If this is an indication that Equipment will be a slower paced, but more powerful than PTs in general then I think this new card category takes the game in a great direction.


Is this a stand alone VS game or just an expansion to be played in the VS system?


Each set of Vs System 2PCG can be played on it’s own straight from the box or can be mixed with the other sets.