Super Heroes often don’t fight alone. Sidekicks have been a staple in Marvel Comics throughout the decades. Some of those Sidekicks aren’t even human.

Legendary® – Civil War comes with 15 new ‘Special Sidekicks:’ super powered pets known as the Pet Avengers! Players will play with the Sidekick stack face down and once per turn can pay 2 Recruit points to recruit a Sidekick from the top of the stack. Card effects that allow players to Gain a sidekick do not count towards the once-per-turn limit. 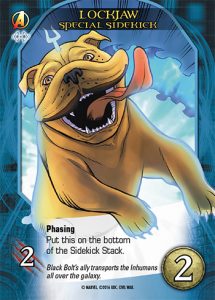 When a Sidekick is played, it is returned to the bottom of the Sidekick stack. Played Sidekicks can help trigger Super Power abilities based on their Hero Class. 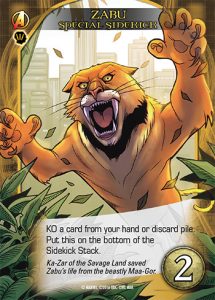 Since the beginning of Legendary, Wounds have always been a card designed to clog player’s decks and slow them down. They were all the same and could only be removed from either the help of specific characters or though the Healing ability, until now. Grievous Wounds are 15 new Wound cards that are more difficult to heal. 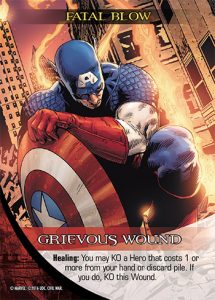 Players will shuffle these new Wounds into the current Wound stack and now play with them face down. Grievous Wounds each have a different Healing ability that can range from paying Attack or Recruit points or even passing them to other players. 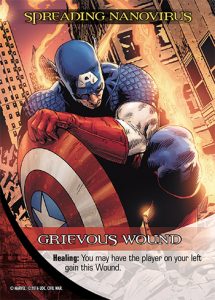 Using these Healing abilities does not prevent players from recruiting or fighting that turn. Grievous Wounds still count as ‘Wounds’ for all card effects. Players with a normal Wound in their hand can still use it’s normal ‘KO all your Wounds’ Healing ability to KO all their Wounds including Grievous ones.