Legendary®: A Marvel™ Deckbuilding Game has always been about the battle. Stacks of cards representing Heroes, Villains, Masterminds, and Bystanders move around the board as the fight between the players and the game plays out. One card stands above all others. Schemes give a story and it dictates what the players will face and how the game can beat them. Legendary®: Civil War is full of these stories.

It began with a single moment of good intentions. A group of young superheroes went out to stop a villain and it ended in a tragedy. This ultimately changed the landscape of what was considered right and wrong. 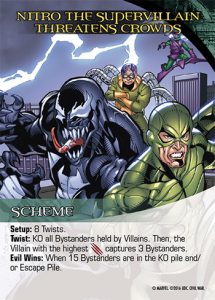 A line was draw between those that fought for the Freedom to choose and those that carried the burden of Responsibility. 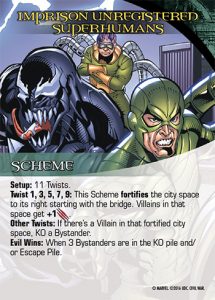 Heroes were imprisoned, Villains were hired, and secret identities were revealed. 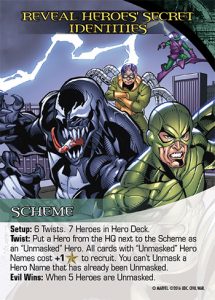 Disagreements became demands, then violence, and then an all-out Civil War. 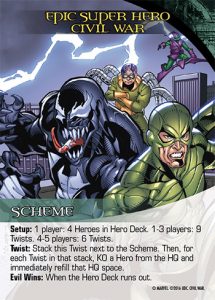 
Brilliant schemes. I guess I’m most excited about the SHIELD Clearance keyword. Finally some power up for the villains!

Also, I hope that we’ll soon see the rulebook too! That’s the highlight of the previews for me at least.

Let’s see what you have in store for Firefly for the moment!


The size change ability looks good for making your deck gain momentum fast, I like that and can see me being drawn more to that mechanic with this expansion. Looking forward to seeing it all come together and even more combinations.