It is a simple question we ask ourselves before events at Upper Deck. How can we bring our fans closer to the game they love? We do it by creating the most innovative sports cards and memorabilia, but there has to be more to it. Great brands develop relationships with their fans and that is something Upper Deck worked to do with everything the company had going on at the 2016 NHL Draft™! 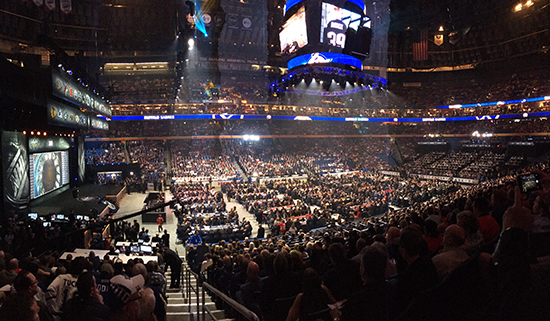 Fans flocked to the Dave & Adam’s Cardworld booth to grab Upper Deck hockey packs to participate in promotions at the Draft. 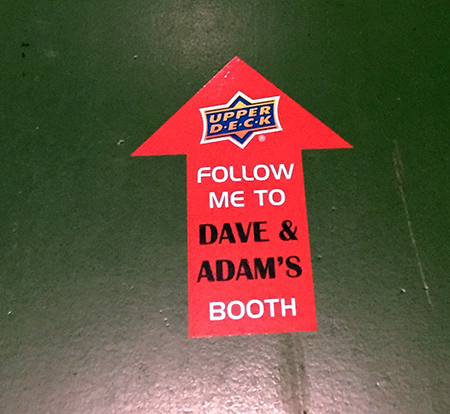 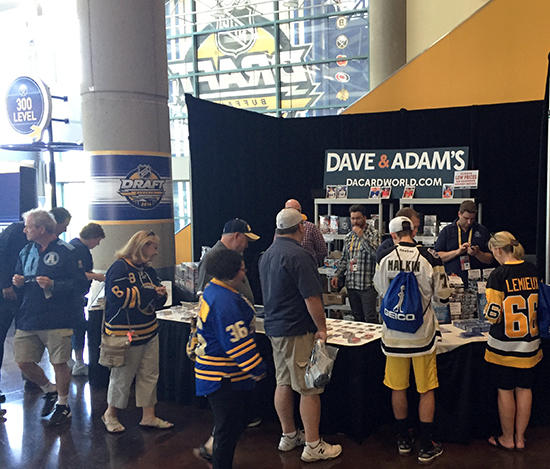 One of the favorites with fans was the chance to play Puck-O where you could score a variety of cool prized just for opening two packs at the Upper Deck booth. Everyone was fired up with the goodies they scored. 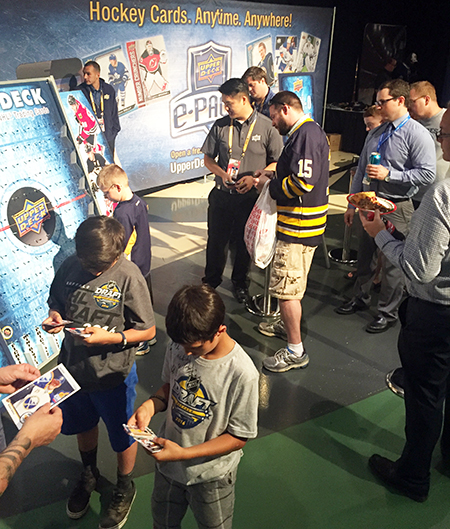 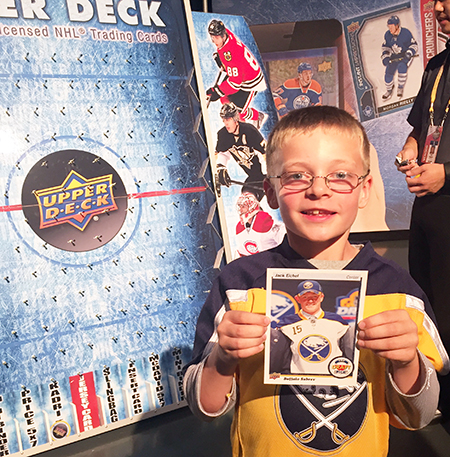 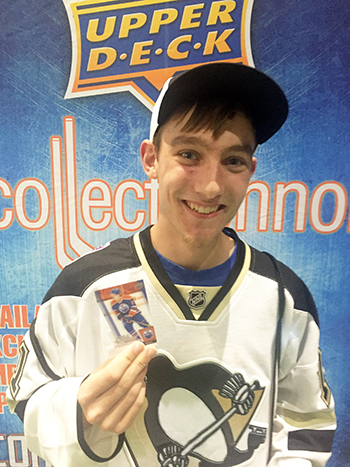 Upper Deck also made sure kids in attendance were a priority by sharing collector binders with them to help them get started in the hobby. 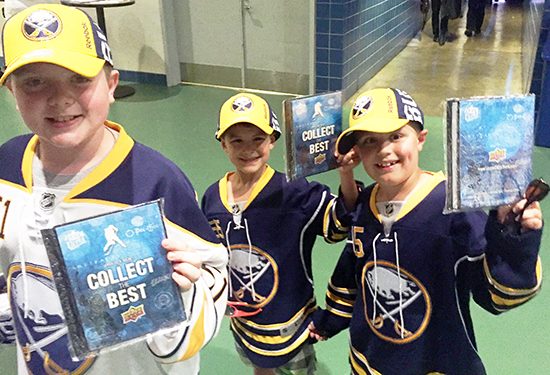 Upper Deck also partnered with the NHL and Dave & Adam’s Cardworld to provide one lucky father and son with a behind-the-scenes- tour of the Draft. It’s moments like these that help bring fans so much closer to the game while providing memories that will last a lifetime. Of the tour, Chris Carollo said, “My son and I will always remember that special day!” 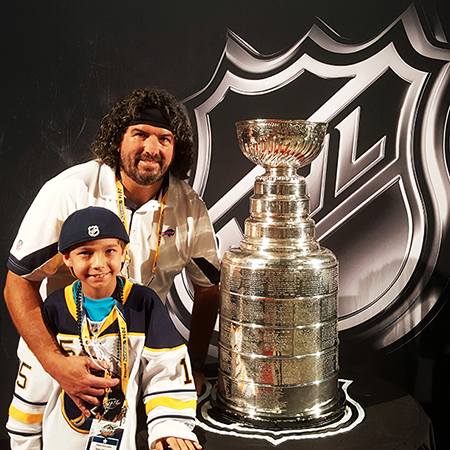 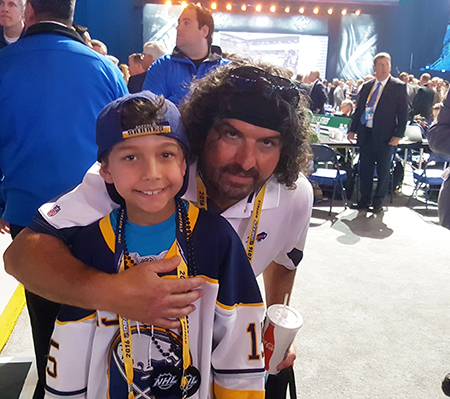 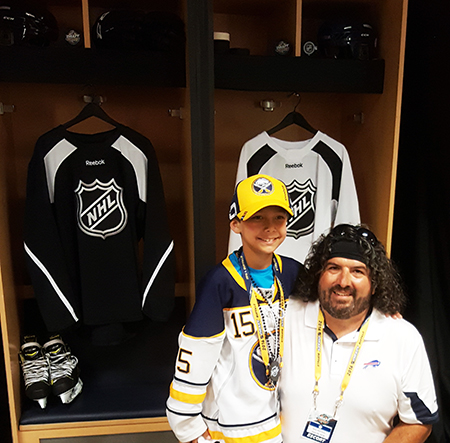 And then the Draft started! Toronto Maple Leafs fans were psyched to see the team acquire Auston Matthews with the #1 pick in the Draft. Down in the gauntlet area of the Draft, another set of UD staff were very busy greeting the Draft picks, having their photos taken in their new team jerseys, hats and even ties that will be used for Draft Day cards. 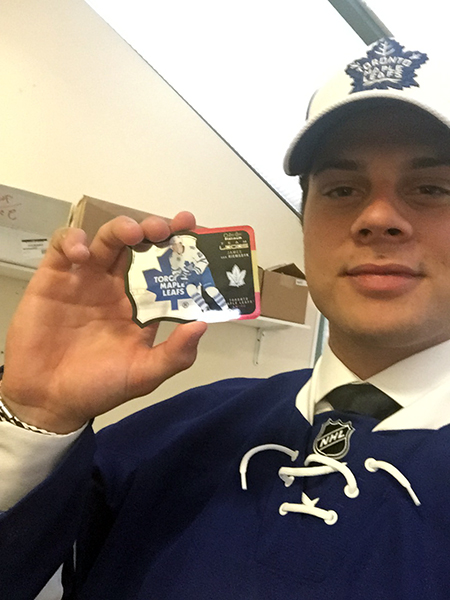 Auston Matthews takes a selfie with a Maple Leafs card from O-Pee-Chee Platinum. 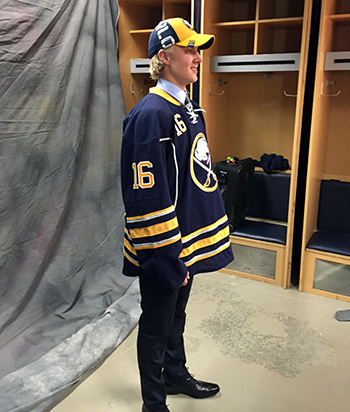 Alexander Nylander poses for UD photographers at the Draft. 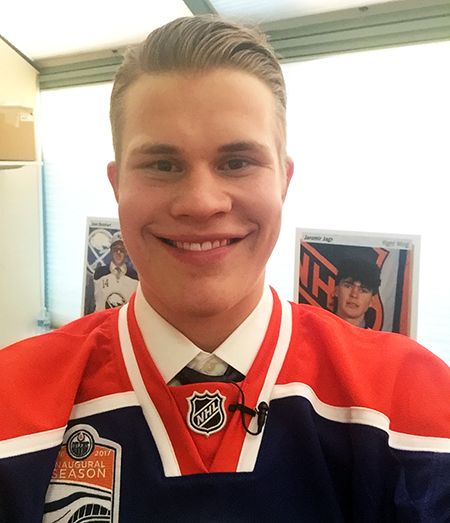 Jesse Puljujarvi is all smiles as he takes a selfie while Jaromir Jagr photo bombs him in the background.

Upper Deck was on hand for a variety of memorable moments like when Matthew Tkachuk met up with Auston Matthews in the Upper Deck room to congratulate each other on hearing their names called. 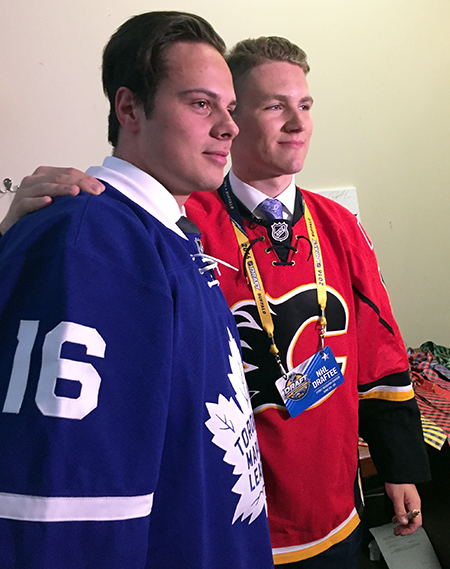 Some of the best fun however came when Upper Deck started engaging fans live on Twitter. One of UD’s favorite advocates is a HUGE Boston Bruins fan. She was quick to share excitement about Charlie McAvoy getting drafted by the team. 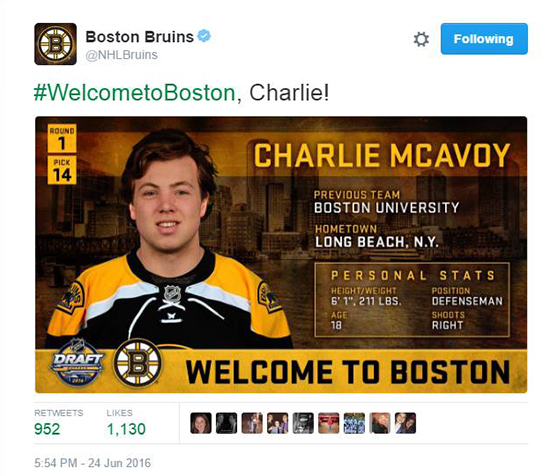 So Upper Deck had Charlie share a little message to her.

And he even took time to sign a little something for her as part of the company’s popular Random Acts of Kindness program! 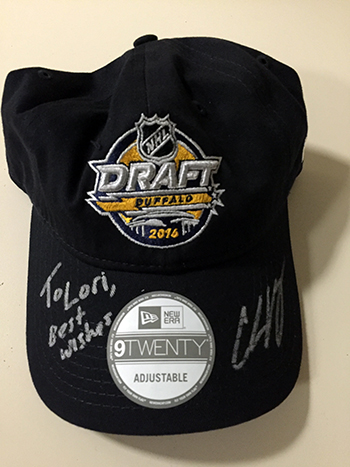 As the young stars made their way through they signed Upper Deck’s Draft Board so we could give collectors a look at the autographs they will want to chase next season! Here is a look at some of the signatures from the top picks! 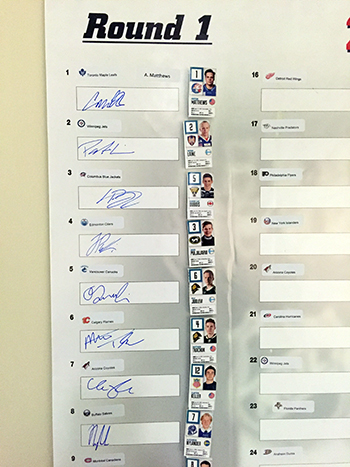 Forgive their shaky hands, this was likely their first autograph after being drafted!

Day Two of the 2016 NHL Draft may have been even more exciting than Day One. Upper Deck had Dave & Adam’s Cardworld doing live breaks in the media area of the Draft. Rookie after rookie poured by as fans watched the team open exciting Upper Deck Hockey products. 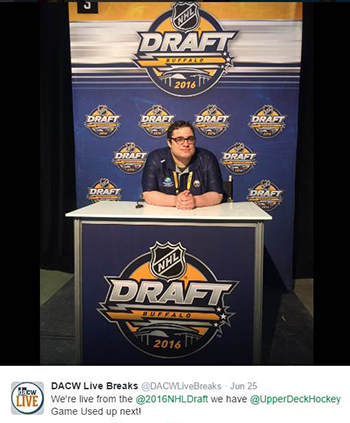 Then Upper Deck brought in Noah Hanifin, the 5th overall pick in the 2015 NHL Draft™ to sign free autographs for fans. He also took photos and fans loved meeting him! 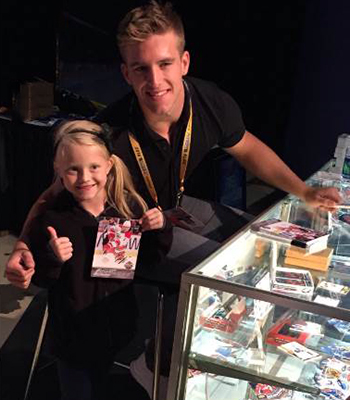 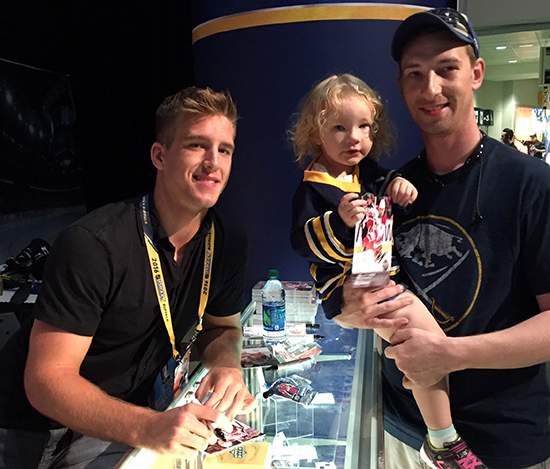 Even the Keeper of the Cup, Phil Pritchard, came by to say hi! 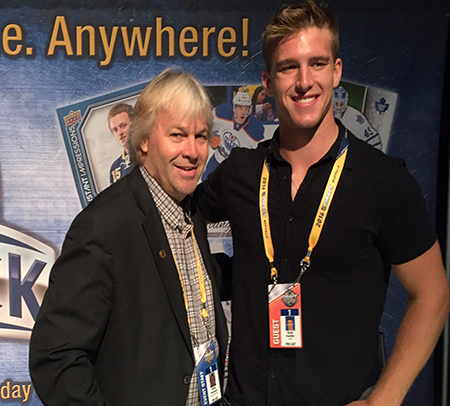 And what do you do when the line is a bit too long? Make some trade on Upper Deck e-Pack™ of course! 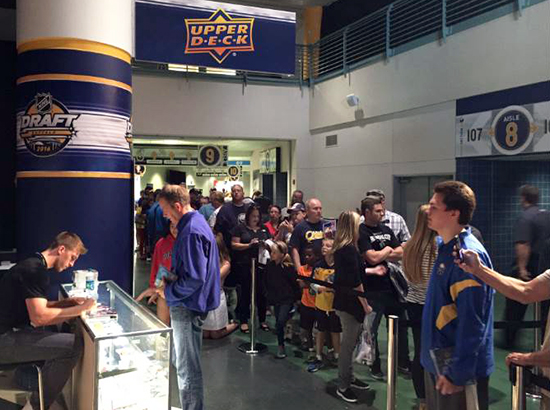 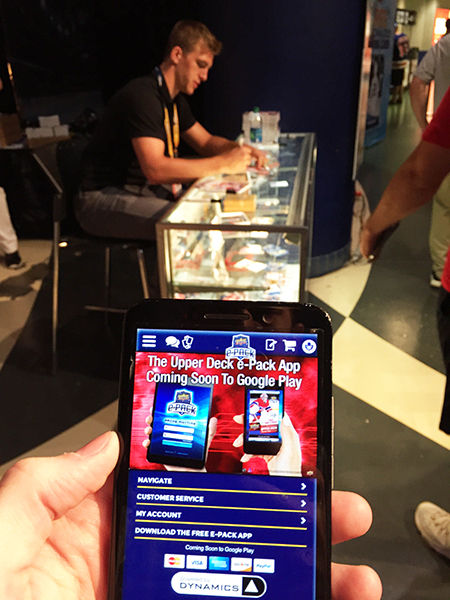 Noah also signed a variety of cards for upcoming Upper Deck sets including these beauties from 2015-16 NHL Ultimate Collection releasing this summer. 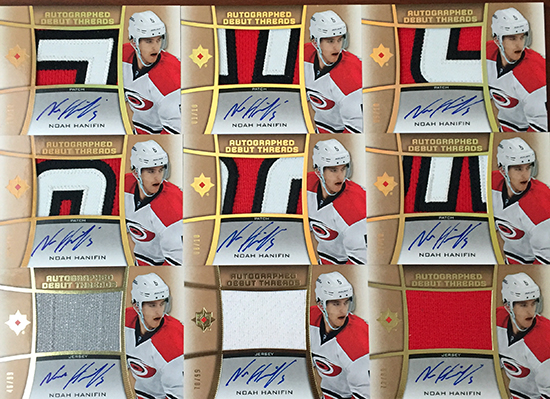 Fans who signed up for Upper Deck e-Pack™ were able to get some personalized trading cards made on site where a photographer shot them and printed their cards up. Even some of the Draft Picks and their families couldn’t wait to get their very own Upper Deck card! 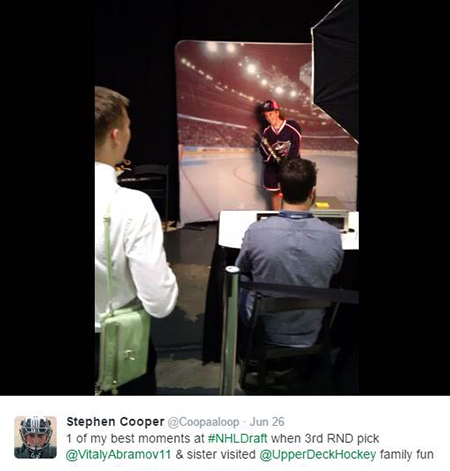 Upper Deck was also able to get to know some of the draft picks who collected hockey cards when they were young like Joseph Woll of the Toronto Maple Leafs.

Thanks to all the fans who came out and who engaged with UD online! We’ll see you next year for the 2017 NHL Draft™ in Chicago!