Matt Cave, owner of BatCave Games in Vancouver, WA is an avid gamer. He started carrying Legendary®: A Marvel Deck Building Game in his store when it first released, and at the urging of a friend gave the game a try. After one play through he was hooked. “I immediately cracked and sleeved a copy for regular playing with my friends, customers, and employees,” Matt said. “I found it easy to teach to non-gamers because they were so familiar with Marvel and could immediately draw value by attributing the characters and their abilities.”

He has eagerly picked up every expansion since the initial release. This continued with the release of the Marvel 3D trading cards in 2015. This was the first card set by Upper Deck that combined Marvel trading cards and playable Legendary® content. Matt first bought two boxes to put together sets of the new heroes and bystanders. Once he saw there was a redemption card available that would put a player into the game, he immediately ordered a case in search for one. “I cracked an entire case so I could get the card and then helped my friends and customers assemble complete sets of the 3D exclusive heroes and bystanders.”

Once redeemed, Matt worked with the entertainment product development team at Upper Deck to create his very own Bystander card. Using images submitted by Matt, and a list of his favorite Marvel characters, Upper Deck was able to make him a part of his favorite board game. 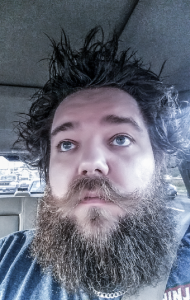 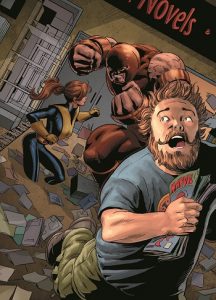 For the first time ever, Upper Deck is proud to announce the Legendary®: Civil War Comic Store Owner Bystander card. 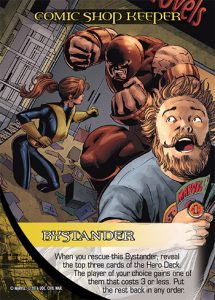 “I’m grinning from ear to ear over here”, Matt said after seeing his card for the first time. “This is the coolest thing ever!”

Hell ya man! I want one signed !