I did it! It wasn’t easy, but in the end it paid off. It took daily discipline and patience, but after 200 trades I got the elusive Connor McDavid Young Guns rookie card and I got it for FREE! 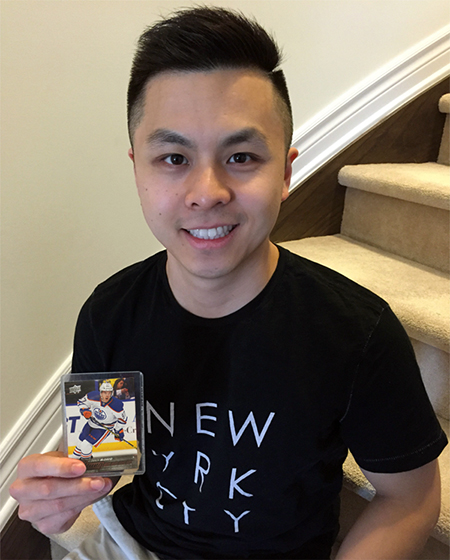 Calvin Lam completed over 200 trades on UpperDeckePack.com to obtain a Connor McDavid Young Guns rookie card using nothing except the daily free packs available on the website.

It all started when a friend told me about Upper Deck e-Pack™ and how much fun it was. I honestly didn’t know what to expect, but as a curious hockey card fan I signed up at www.UpperDeckePack.com. I have been out of the hockey card game for quite some time as other life events took priority such as buying a house, getting married and having kids. I figured I’d start with these daily free packs to see what the site was all about. My initial thought was that it was pretty cool to be able to crack open a virtual pack and see the cards in detail, front and back. I was always tempted to buy some packs, but never ended up doing so. Though I did live vicariously through my friend who did purchase packs and got some great hits! What I love is that these are not just digital cards, you can actually take ownership of them!

The day that blew the door wide open for casual collectors like me was when trading began on Upper Deck e-Pack™. That day, I started my mission to “foil-up” my first card using my 100+ base cards and I can honestly say that it was really fun chatting with other people and helping each other out. When you foil-up you are basically trading in your digital cards for a rare physical parallel of the card. I ended up foiling up my first card, but my first break wasn’t until I noticed someone in the chat room offering a Giroux Portraits insert for a bunch of base cards. I sent an offer and we eventually agreed on 20 base cards, plus the foil card I acquired for the Giroux Portraits. 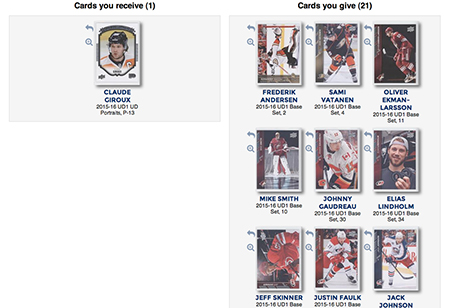 My next key break was when I was randomly looking through collections and made an offer for a McCann Young Gun for the Giroux Portraits, which was accepted. I was testing the waters to see what I could get for this Giroux insert, not knowing I ended up with the better deal in the trade. 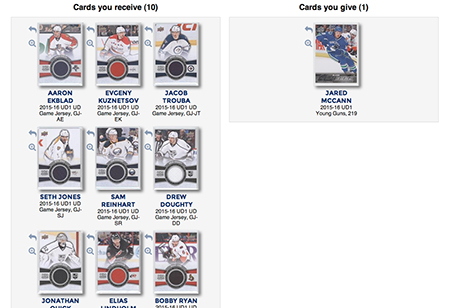 The next chat room message that got my attention was a Tyler Myers Signature Sensations insert. I didn’t know much about them, so I looked the card up and saw that these types of cards were quite rare and had decent value. We eventually agreed on two Game Jersey cards for it, which I thought was a great deal!

Once again scouring the chat room for trades, I was fortunate enough to find a member that wanted to trade any of his Game Jersey’s 1-for-1. He had some nice ones, so of course I took the opportunity to get a few that I preferred over my current collection. 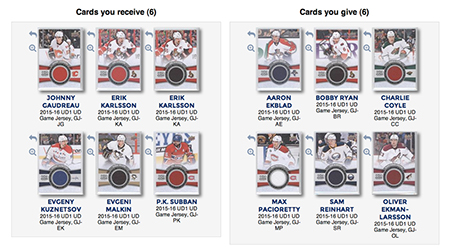 The next big trade I made was for an Alex Galchenyuk Signature Sensations. I figured it was a nice card up for grabs which could be a solid trade chip in the future. We agreed on a deal for a Burns, Malkin and Tavares Game Jerseys.

At the time I didn’t care much for Young Guns since I thought there were so many floating around the site, but I quickly realized that everyone wanted them as they were essentially the trading currency in the forum. I noticed that low-end Young Guns weren’t very sought after, so I went after a mid-tier one; Max Domi. I made a deal for him for a handful of Game Jersey’s and Portraits card, and up once more I went on the trade ladder. 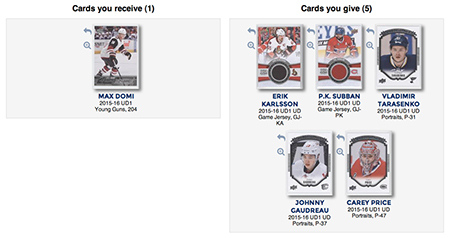 This next deal was a more personal one. I’m somewhat of a Tukka Rask fan, so I wanted his Signature Sensations card much more than Myers’. I knew Rask’s value was higher, so I ended up trading Myers and the Domi Young Gun for Rask and three Game Jersey cards. 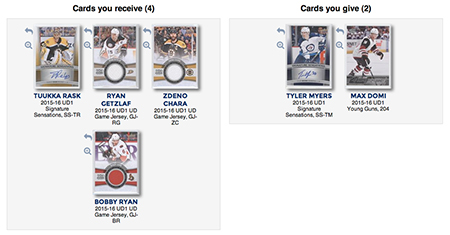 After putting my Galchenyuk Signature Sensations up on the trading block, I was finally able to land my first Larkin Young Gun for it and my Gaudreau Game Jersey card.

I was lucky enough to get my second Larkin Young Gun from a very generous user. I assume that they really wanted the Karlsson Game Jersey. I didn’t complain and accepted quickly.

One late evening I noticed a member wanting to clear out his Instant Impressions inserts and offered 12 for a Game Jersey card. I figured with a nice deal like this I should try and get the Jack Eichel Instant Impressions Achievement card (these are a very hot commodity on the e-Pack platform), so I made a deal for 24 II’s. 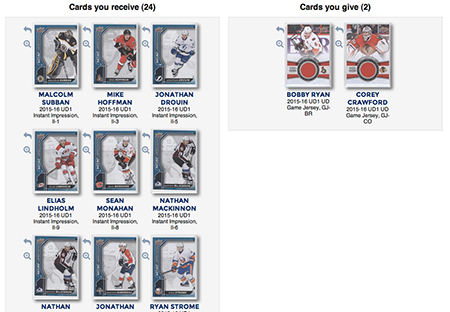 I was quickly able to get a Larkin Young Gun back for my Rask Signature Sensations and a Getzlaf Game Jersey card. It was tough letting the Rask autograph go, but it was for the greater good in the end.

I ended up completing the Instant Impressions set and combined them for Eichel card, but I moved him for a sweet two-color Toews and Crawford Game Jersey card. Another thing I love about e-Pack is for the physical cards you are seeing an actual scan of the card you are getting. 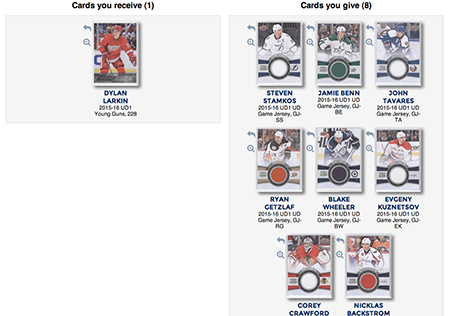 My time with the nice Toews Game Jersey was over quickly as I moved it for my first Panarin Young Gun. As they say, “To make an omelet, you have to break some eggs.”

I quickly realized that I couldn’t fall in love with any card if my ultimate goal was to be achieved. I also felt like higher end Young Guns were much harder to come by than I originally thought. To my disappointment there was far less interest for my Karlsson High Gloss card than I had hoped for, so I moved it for a Larkin and Domi Young Gun.

My game plan at this point was to accumulate Larkin Young Guns as they seem to be the requirement to land the big guy. So I traded my Panarin, Domi and Bennett Young Guns for a Larkin and Fabbri Young Gun. 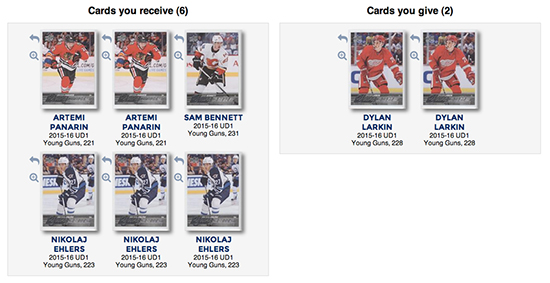 It was getting tough as I would put good offers out there, but I couldn’t get anyone to bit. One member mulled over my offer of five Panarin’s and one Larkin Young Guns rookie for his Connor McDavid Young Guns rookie card. He private messaged me and said that if I added a Domi and Bennett Young Guns rookie card we have a done deal. I quickly made the offer and my nearly impossible goal had finally been achieved using nothing but the free daily packs and trading! 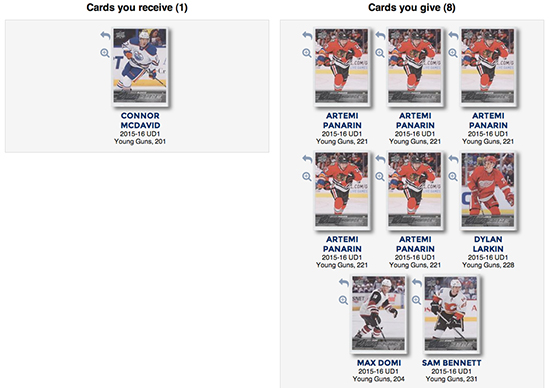 I felt as though I had accomplished something big, but also that nobody else could really appreciate. It was one of those, “you had to be there” situations because telling the story is nice and all, but it’s hard to really understand the time, effort, luck and determination it all took to get there. I honestly don’t know if I could have ended up here without each and every one of my deals. It really seemed as though one trade led to another and I just happened to be the first one to capitalize on many of those deals.

For the record, I only have one account and posted very sparingly, but I would spend a lot of time watching to see what people were looking for in the forums. I found that was how I was able to find all these favorable deals, especially in the beginning. At the end of the day, there are a lot of very good members on the Upper Deck e-Pack™ site that have helped me along the way. They are true hockey card collectors in every sense of the word who I not only get along with, but relate to.

It is always nice to be able to physically open a pack of cards and get that “new card smell,” but there’s something satisfying about being able to share your collection to other hobbyists in a very easy and convenient way. I look forward to continuing to make deals on Upper Deck e-Pack™ and I already have my eyes set on my new goal with Series 2 out; the Connor McDavid Young Gun Canvas card!

So, you wanna trade?

Calvin Lam is a graphic designer by day and your everyday superhero by night. He is also a father of two, husband, sports enthusiast, collector of all nice things and fantasy hockey superstar. His Upper Deck e-Pack™ username is iamlilc, so feel free to hit him up for trades.