Upper Deck has a long history of honoring the military and giving back to them. Whether it is through charities like Operation Gratitude, VetSports, the USO, Defending the Blue Line or Veteran’s Village, Upper Deck cares about those who have served. The company’s greatest tribute is coming this summer however in a special insert set found in 2016 Goodwin Champions, a product that features a variety of content from all sports and genres. Upper Deck is working to include more than a dozen World War II veterans in a Museum Collection Signatures set that will be inserted randomly into packs of 2016 Goodwin Champions releasing in mid-July, 2016.

These Museum Collection Signature cards will not be easy to find, falling at 1 in every 160 packs on average. They are signed directly on the super thick (140 point) cards and some cards include colorful inscriptions. The images used show these heroes when they served and the card backs feature a nice biography on them along with authentication copy for the autograph. 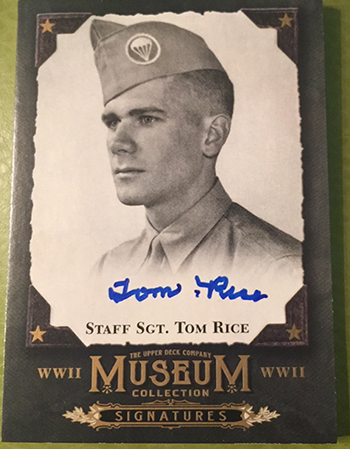 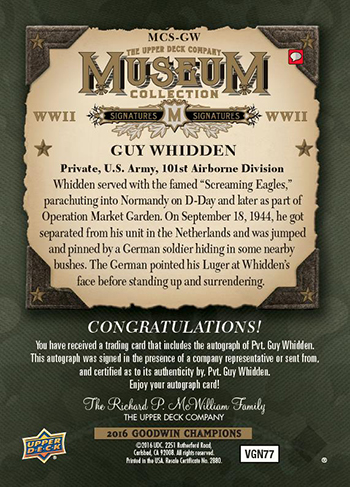 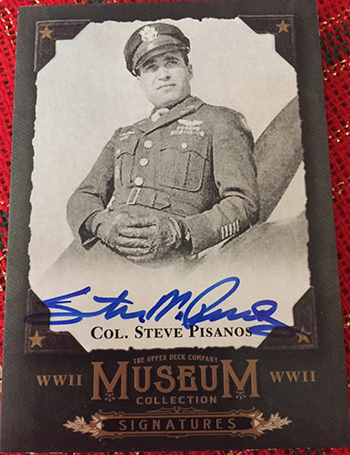 While Americans spend Memorial Day saying thank you to those who paid the ultimate sacrifice, Upper Deck would like to shine a light on some of the heroic servicemen who are still with us that have been confirmed to be included in the set:

Lauren F. Bruner, Fire Controlman FC3/c, U.S. Navy, USS Arizona
Bruner became known as the “Second to Last to Leave” after becoming one of just 334 sailors on USS Arizona to survive the attack on Pearl Harbor. After a Japanese bomb blew up the ship’s forward magazines, Bruner escaped the inferno by climbing hand over hand across a ship’s line to the adjacent USS Vestal in spite of burns that covered more than 73 percent of his body. 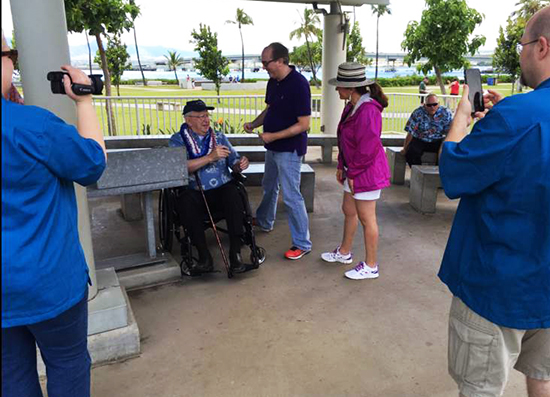 Bruner appeared at an Upper Deck sponsored event in Pearl Harbor earlier this year where he signed promotional card and took photos with hobby shop owners from all over North America.

Donald Burgett, Sergeant, U.S. Army, 101st Airborne Division
Burgett, who enlisted on his 18th birthday, was a member of the so-called “Screaming Eagles” division that parachuted into Normandy on D-Day, then later into the Netherlands as part of Operation Market Garden. There, he spent 72 days behind enemy lines battling the Axis powers and later fought in the Battle of the Bulge.

Don Mates, Private First Class, U.S. Marine Corps, 3rd Marine Division
After battling Japanese forces on Guam, Mates and the 3rd Marine Division headed for Iwo Jima and were sent ashore two days into the battle. While on patrol to locate enemy spigot mortars, Mates was wounded by an enemy grenade, severely damaging both legs. He underwent numerous operations to remove shrapnel over the ensuing 30 years.

Jim “Pee Wee” Martin, Private, U.S. Army, 101st Airborne Division
Martin, a member of the famed “Screaming Eagles” of the 101st Airborne Division, parachuted into France on the eve of D-Day and fought for 43 days as part of the Normandy campaign. Martin later fought in the Battle of the Bulge and was part of the taking of Berchtesgaden (“Eagle’s Nest”), Hitler’s lair in the German Alps. 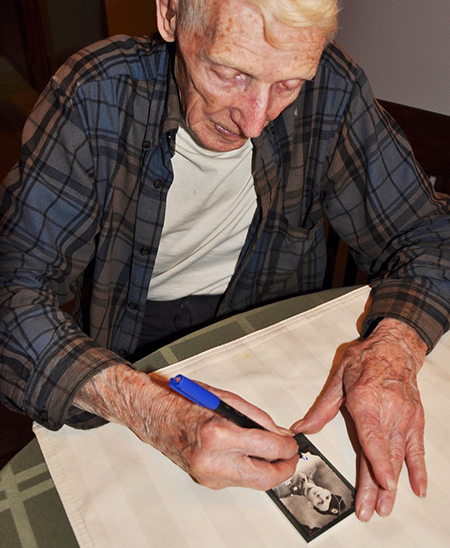 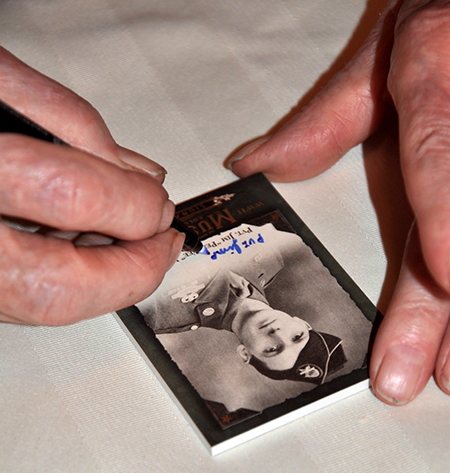 Eric Ahronheim, Corporal, Eighth U.S. Army, 40th Infantry Division
Ahronheim grew up in Germany, and his parents perished in a Nazi concentration camp. A Jewish organization helped Ahronheim, then 14, emigrate to the United States, and he was drafted shortly after graduating high school in St. Louis. He served in the infantry in the Pacific Theater and in helping the Allies retake the Philippines and survived being shot in the face in Manila.

Ed Bearss, Corporal, U.S. Marine Corps, 1st Marine Division
Bearss, whose father and uncle were U.S. Marines, enlisted shortly after the outbreak of World War II. After seeing combat at Guadalcanal and the Russell Islands, he served with the 3rd Marine Raider Battalion in New Britain. There, he was severely wounded by Japanese machine gun fire at “Suicide Creek” and spent 26 months recovering.

Frank Hall, Corporal, U.S. Marine Corps, 3rd Marine Division
The raising of the American flag atop Mount Surabachi on Iwo Jima is one of the most iconic images of the Second World War, and Hall was close enough to witness it, from a ship offshore on which he was receiving medical treatment. Serving with the 3rd Marine Division in the Pacific Theater, Hall fought in numerous campaigns, including Bougainville and Guam.

Steve Pisanos, Colonel, U.S. Eighth Air Force, VIII Fighter Command
Spiro (Steve) Pisanos, born in Athens, Greece, flew Spitfires with the RAF Yankee Squadron before America entered the war, then flew a P-51 Mustang and P-47 Thunderbolt with the U.S. Air Force. He was credited with 10 aerial victories, making him an “ace” twice over and was the first person ever granted American citizenship on foreign soil, in London, on May 3, 1942. 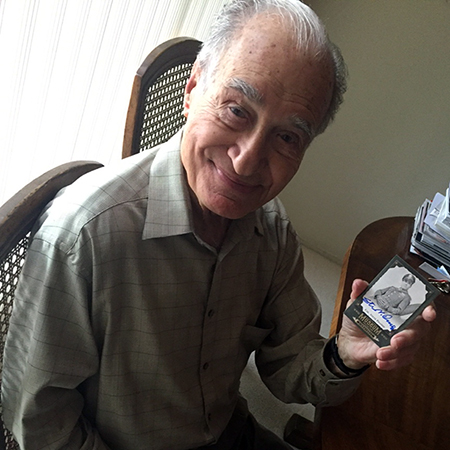 George Kidd, First Sergeant, U.S. Marine Corps, 2nd Marine Division
Kidd was one of the first African-Americans to join the Marine Corps after President Roosevelt ordered they be given an opportunity to be recruited in 1942. Even then, these Marines trained at a segregated base, Montford Point Camp in New River, N.C. Kidd spent World War II as a drill sergeant there and later saw combat in Korea and Vietnam.

John C. Bollinger, Medical Corpsman PhM2/c, U.S. Navy, USS Missouri
Bollinger, who grew up in Webster Groves, Mo., served on the ship named after his home state: USS Missouri, which took part in the Battle of Iwo Jima and Okinawa near the end of the war in the Pacific. Bollinger was aboard Missouri on Sept. 2, 1945, when Japanese and American dignitaries signed the Japanese Instrument of Surrender, officially ending World War II.

Robert Farner, Private First Class, U.S. Marine Corps, 1st Marine Division
After an enemy attack in March 1942 left the barracks at Fort Hills in the Philippines engulfed in flames, Farner helped extinguish the inferno, earning a Silver Star for his actions. Two months later, he was captured by the Japanese after the fall of Corregidor and held as a prisoner of war until the conclusion of the war. 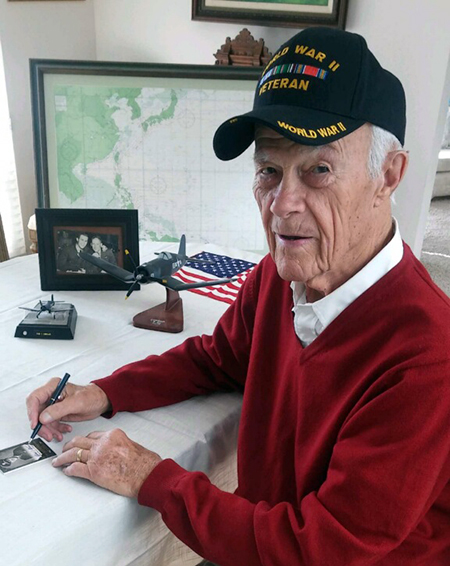 Walter L. Beyer, Quartermaster QM1/c, U.S. Navy, USS Bowfin
The submarine USS Bowfin, nicknamed “Pearl Harbor Avenger” because she launched a year to the day after the infamous attack, had a successful war record tracking and sinking Japanese convoys in the Pacific Theater. Beyer’s responsibilities on Bowfin included taking star sightings from the bridge, which determined plotting of the ship’s position.

Tom Rice, Staff Sergeant, U.S. Army, 101st Airborne Division
Dropping into Normandy (from an altitude of only 350 feet) in advance of the Allies’ D-Day landings, Rice was the first in his unit to exit the plane and got snagged in the doorway briefly — with his fellow paratroopers jumping over him — before freeing himself. He also fought in Operation Market Garden and in Bastogne during the Battle of the Bulge. 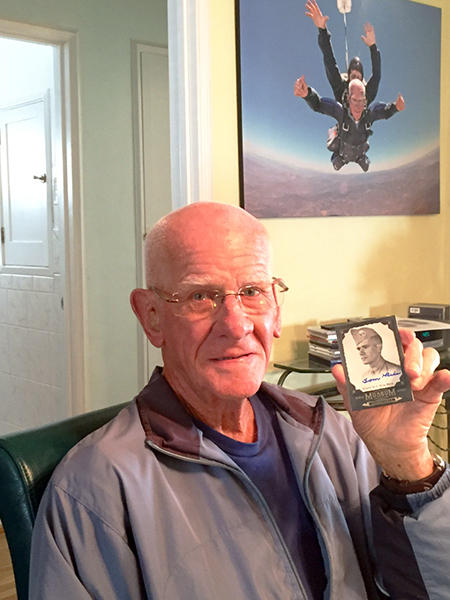 Martin I. Jackson, First Lieutenant, U.S. Third Air Force, III Fighter Command
Jackson flew a P-47D fighter-bomber in the Pacific Theater in 1944-45, participating in bombing sorties of the Japanese home islands. Notably, he was group commander of a 16-plane formation that flew over Nagasaki on Aug. 8, 1945 — the day before the plutonium bomb “Fat Man” was dropped on the city — then led another expedition the day after the bombing.

Thanks to all the men and women who have served honorably to protect and defend the USA!


Thanks Upper Deck for taking care of the vets!


This may be the greatest insert set UD has ever done… incredible! Thank you for honoring these heroes on cards.


Now THESE GUYS need to be as revered, or more so, than someone who can throw a basketball through a hoop….thank you for all you’ve done for us!!