Vs. System® 2PCG™ is more than just a head to head battle of two armies. It is an ever evolving war where a lead or advantage can change with a single card. This is at the heart of every Plot Twist and Vs. System® 2PCG™ A-Force brings some new Plot Twists with that very idea in mind. 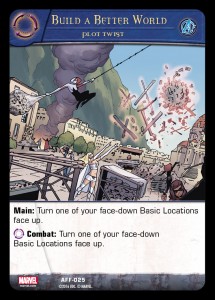 A-Force’s “Build a Better World” turns spent locations face up. It can be used not only during a player’s Main phase, but also during any player’s Combat phase, to activate that suddenly needed super power. 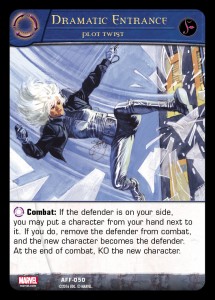 Femme Fatale’s “Dramatic Entrance” allows defending players to change the focus of an attack to a character in their hand. This can save an important character on the defending side or it can lead to the sudden demise of the attacker.

How will these cards fit within your decks? Vs. System® 2PCG™ A-Force is scheduled to release April 20, 2016. Pre-order now at your local gaming store.