In Vs. System® 2PCG™: The Marvel Battles the keyword Swarm was introduced. This allowed players to have multiple copies of the same card on the same field of play. In the new Vs. System® 2PCG™ A-Force players can take Swarm to new levels. First with Femme Fatale’s Madame Masque and her keyword Bio-Duplicate. 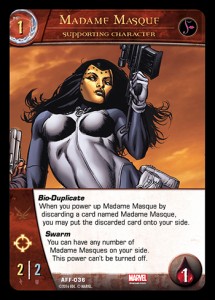 Madame Masque uses her Supporting Character card to not only power herself up but also gain additional Duplicates, all at the same time.

Another unique use of Swarm is with Femme Fatale’s Goblin Queen, and where the Goblin Queen reigns her Demon Goblins follow. Goblin Queen’s Summon Goblins brings up to 4 Goblins to her side. 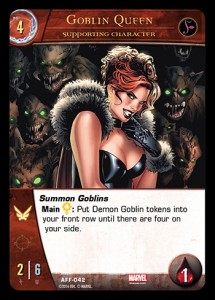 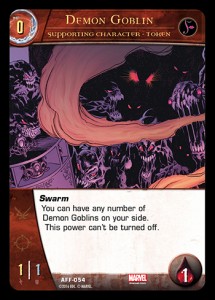 Demon Goblins are the first Token characters introduced to Vs. System® 2PCG™. Token characters are not part of your deck. Instead they are placed off to the side waiting to be summoned. A token character works just like a regular character except that if it ever gets put into a KO pile or otherwise leaves play, it is removed from the game. The A-Force set comes with four copies of the Demon Goblins.

How will these cards fit within your decks? Vs. System® 2PCG™ A-Force is scheduled to release April 20, 2016. Pre-order now at your local gaming store.