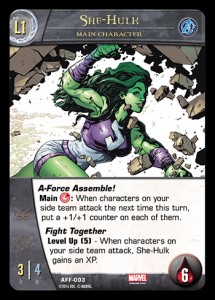 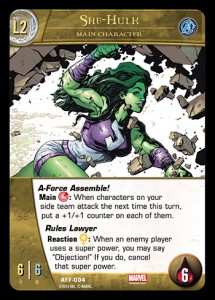 Reaction powers trigger when a certain condition is met. In this case it’s “When an enemy player uses a Super Power.” When that happens, She-Hulk can pay the required location (and say “Objection” of course) in order to cancel that super power so it never takes effect. Any costs the enemy player paid are still spent.

Players can use a Reaction power at any time, as long as its trigger condition is met. However, like other super powers, players can only use it once per turn.

How will this character fit within your decks? Vs. System® 2PCG™ A-Force is scheduled to release April 20, 2016. Pre-order now at your local gaming store.