Two more Supporting Character cards from the upcoming Vs. System® 2PCG™ A-Force set are ready for their reveal.

A-Force’s Dazzler has had a long history of using her power to daze even the biggest of foes. It only seems right to connect her with the new effect, Daze. 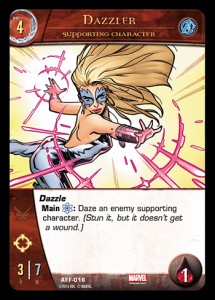 Daze is a game action that stuns a character but doesn’t wound it. The character gets turned face down, loses all +1/+1 and -1/-1 counters, and counts as being stunned. This works exactly like stunning a character normally except the character doesn’t gain a wound.

This can certainly help in bringing a big enemy back down to earth and remove them from any potential combat during Dazzler’s turn.

Femme Fatale’s Morgan le Fay has spent lifetimes perfecting the mystic arts. Her Supporting Character card introduces a super power that can stack throughout the game. 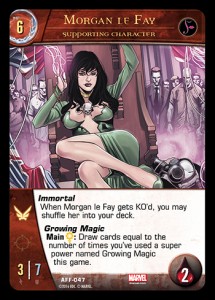 Growing Magic allows players to draw cards equal to the number of times they have used Growing Magic. One card the first time, two cards the second, four cards the fourth, and so on. Her Immortal ability means she has the chance to come back into the game again and again, and continue to grow her Growing Magic uses. (And yes, if you play a different copy of Morgan Le Fay and use that copy’s Growing Magic, it still counts all previous uses of Growing Magic.)

How will these cards fit within your decks?

Vs. System® 2PCG™ A-Force is scheduled to release April 20, 2016. Pre-order now at your local gaming store.


I really appreciate the effort to make keywords (such as daze) usable in other sets. It’s always disappointing to see something too specific that it gets replaced with another keyword down the road. Great consistency!