Many comics, stories and plot lines in the Marvel universe are about duos: pairs of characters that are either related, partners, married, or maybe just the best of friends. Captain America and Bucky Barnes, Rocket Raccoon and Groot. Scott Summers and Jean Grey, Pietro and Wanda Maximoff – these are just some of the many examples you may be familiar with. One of the reasons we love these types of relationships is because they allow us to become more emotionally invested in the storyline. It’s one thing when two heroes are fighting a villain and one of them is hurt, captured or maybe worse. When those two characters have a connection, however, the story can hit home on a much deeper level. Maybe it’s simply that it’s just easier to care about a character that someone else in the story cares about.

Today’s Vs. System® 2PCGTM Defenders preview features another of these well-known duos: Cloak and Dagger. Tyrone Johnson and Tandy Bowen were teenage runaways that met on the streets of New York. They became close friends and use their newfound abilities to fight crime and keep the streets safe for other young people. 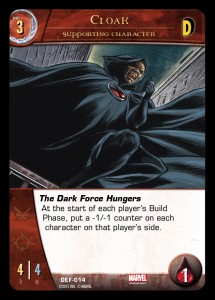 Cloak is a solid 4 ATK and 4 DEF 3-cost supporting character. He can take on many 3-cost characters and even some 4-cost characters without outside assistance. If you can successfully keep him safe, his Keyword Power, The Dark Force Hungers, will begin to drain the life force of your opponent’s team starting on the very next turn. Every character on your opponent’s side will gain a -1/-1 counter at the start of the Build Phase, including your opponent’s Main Character. This is not only a great way to reduce the power your opponent has available to attack you, but any characters with only 1 DEF will automatically stun as soon as they receive the -1/-1 counter. Cloak can be very helpful to ensure you retain board control, making larger threats weaker plus removing smaller threats all by himself.

As a reminder, the Build Phase is after the Recovery Phase, and it is when players may recruit Supporting Characters. Since Cloak’s power triggers at the start of the Build Phase, the -1/-1 counters will be placed after your opponent’s characters recover, but before your opponent is able to recruit new characters. Therefore, a newly recruited character will not receive a -1/-1 counter from Cloak.

Also, as you may have noticed, The Dark Force Hungers isn’t limited to your opponent’s side of the field. It says “each player’s Build Phase,” so that includes your characters also. If your opponent doesn’t remove Cloak from the field before your Build Phase starts, every character on your side (including Cloak himself) will receive a -1/-1 counter as well. Obviously, that’s not great for you, but there must be something you can do in order to prevent your own characters from succumbing to the “Dark Force,” right? In the comics, the best way Cloak has to keep the hunger under control is with help from Dagger. Dagger’s light seems to satisfy Cloak’s cravings. Naturally, it made sense for Dagger’s Defenders card to be similarly themed. And fittingly, when Cloak and Dagger are on the board together, the synergy between them will benefit you greatly, more than either of them could do by themselves. 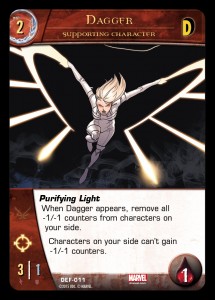 On her own, Dagger is a pretty strong 2-cost character at 3 ATK, plus she has Ranged, symbolizing the daggers of light that she can throw. Ranged will allow her to pick off many opposing characters without the danger of stunned back, which is very valuable. The first part of Purifying Light, her Keyword Power, will shine on your side of the field, cleansing all of your characters of any -1/-1 counters that they’ve accumulated so far.

To protect you from The Dark Force Hungers, though? That’s where the second part of Purifying Light comes into play. Dagger prevents your characters from gaining any -1/-1 counters, which includes protecting you from Cloak.

Even without Cloak, Purifying Light is a great ability, keeping your board strong and protecting you from many of the negative effects your opponent might play. Cloak and Dagger together, though, gradually whittle down your opponent’s board, allowing you attack “up the curve” and make more favorable trades in combat. That could be exactly the early board control you need to get a lockdown on the game in the early going. Plus, there are many Main Characters that can benefit from this teamwork. Take a look through them and see what cool ideas you can come up with!