The mark of any good superhero story is the presence of a formidable villain. A villain needs to have a commanding presence, and that often involves striking fear into not only the heroes, but the other villains as well. They must be strong, either mentally, physically or both. But most importantly, villains have to provide a sufficient challenge for the heroes to overcome or else the story may not be interesting. Most of the best superhero stories involve our champions overcoming some precarious situation that is either caused or made more difficult by the villain. Whether the villain’s goal is money, power, or even simply causing random mayhem, the villain is usually exceptionally focused on whatever that goal is. Therefore, the most intimidating villains are also usually the most ambitious and assertive. They know what they want and they aren’t going to allow anyone, good or evil, to stand in their way of getting it.

Today’s Vs. System® 2PCGTM Defenders feature article spotlights a villain well-known to possess all of those traits: the Kingpin. Kingpin is one of the most strategic, calculating and shrewd villains in the Marvel universe. He always has an eye on his endgame and has the seemingly perfect plan to make it happen, starting with him at the top and working its way down to his henchmen. The Kingpin Supporting Character in Vs. System® 2PCGTM is no different. Kingpin doesn’t want to work for some Main Character. He doesn’t believe himself to merely be some random underling. He wants to be in charge of it all, so he’s going to take matters into his own hands and give himself the promotion that he has earned: 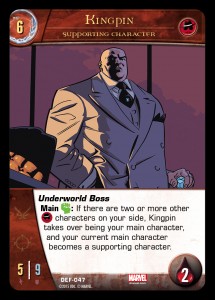 As you can see, Kingpin gives you a lot of things to think about. Even as a 6-cost character there are only two other cards in the game with a higher base DEF than Kingpin (and they cost 7 and 8). This makes Kingpin both a fantastic front-row defender and also an extremely resilient attacker. Plus he has 2 health, so your opponent will need to come up with a lot of total damage or use some other resources in order to get rid of him. Kingpin is already a game-changer even before we read his card text.

Speaking of game-changers, Kingpin’s Keyword Power, Underworld Boss, will make you rethink the way you play Vs. System® 2PCGTM. One of the base tenets of the game is that your Main Character is your endurance. You choose one at the start of the game, and if it gets KOd, you lose. Sounds simple enough, right? However, Kingpin doesn’t like it when he’s not in control. He has always been a leader, not a follower, and always believes he could do a better job than whatever bumbling, second-rate Main Character (in his opinion, anyway) you started with. For only one

, and with the prerequisite that you have two or more other Underworld characters on your side, you can have Kingpin take his rightful place as your team’s leader and lifeblood.

Obviously, there will be some questions whenever a card affects a fundamental principle of the game, so we’ll elaborate a bit on how this works:

– When Kingpin becomes your new Main Character, he keeps all wounds and +1/+1 or -1/-1 counters on him. His orientation (ready/exhausted) and position on the board remain the same. Likewise for your original Main Character, who is now a Supporting Character.

– Kingpin does not have a level up power and cannot level up.

– After Kingpin becomes a Main Character, if you use Underworld Boss again, it doesn’t do anything.

– If your former Main Character is Level 1 and hasn’t leveled up yet, it remains a Level 1 when it becomes a Supporting Character. It does, however, retain all of the XP it has gained so far, and it will still level up as normal once you fulfill the level up condition (or level down, such as with Groot). However, it does not return to being your Main Character again; it is still a Supporting Character even after it levels.

– If your original Main Character (now a Supporting Character) ever leaves play (it gets KO’d or returned to your hand, for example), it gets removed from the game. Removing a character from the game means you set it aside and it does not count as being in your KO pile, deck or anywhere else.

– If a card effect (such as Yondu’s Yaka Arrow) needs to know how much your original Main Character costs, treat it as having a cost of zero.

The Defenders expansion is going to have a pretty large impact on Vs. System® 2PCGTM to put it mildly! All sorts of new decks and powerful strategies will be at your fingertips, ready for you to discover. Now’s a great time to get involved with Vs. System® 2PCGTM!


Comes out tomorrow! I cant wait. 🙂