Superhero comics have always been about the never-ending battle between Good and Evil. In the midst of that struggle, sometimes characters switch sides or maybe their motives change. Sometimes characters tightly ride that middle grey area between Good and Evil. Their actions can either be completely neutral, or maybe their good actions and evil actions make a character who is affiliated with neither side. No matter who ends up on which side, the core notion remains the same. Good vs. Evil will probably always be a central issue in most superhero stories.

Today’s Vs. System® 2PCGTM Defenders preview features two supporting characters from the new expansion who will bring this ages-old conflict straight into your deckbuilding. Will you make a deck that focuses on Good or will you direct the forces of Evil? Let’s take a closer look at today’s previews to help you make your decision. 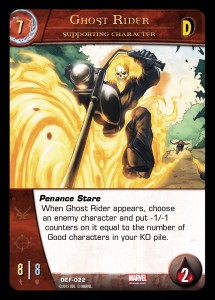 First up we have the Spirit of Vengeance, Ghost Rider. With 8 ATK and 8 DEF, he already stands up to many prior 7-drops, able to take on Hulk, Professor X, Loki and Dormammu without any outside help. He has 2 health, so you’ll likely get a couple of turns out of him at least. His Penance Stare Keyword Power allows you to seek vengeance on any enemy character, making it significantly weaker. You may even get an out-of-combat stun if you can load up enough -1/-1 counters. It all depends on how many “Good” characters you have in your KO pile when Ghost Rider appears.

That leads us to the obvious question: what exactly is a “Good” character? Going forward, every team affiliation will be identified as either Good or Evil. A character that is a member of a Good team is a Good character. A character with a team affiliation that is Evil is an Evil character. This applies retroactively as well. From Set 1: The Marvel Battles, The X-Men

, The Guardians of the Galaxy

are all Good teams. The Super Villains

are a Good team and the Underworld

is an Evil team.

Just how powerful does that make Ghost Rider? If you and your opponent have constantly been fighting for board control, there’s probably many characters that have already been sent to your KO pile. Even at only 5 or 6 counters, that could weaken stronger Supporting Characters like Adam Warlock or Thanos enough where Ghost Rider himself can take them out. You can even possibly get a free stun on your opponent’s Main Character in your Build Phase, as soon as you play Ghost Rider. Your deckbuilding will matter here, though. You can’t just throw Ghost Rider into a deck filled with Villains and Underworld and expect to get a lot of value from him. However, in a deck built to make the best use of Penance Stare, you can accomplish some great things.

On the flipside, we have one of Ghost Rider’s major enemies, Blackheart. 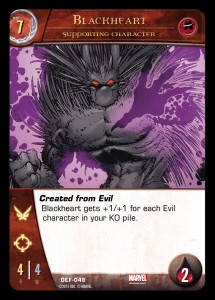 Blackheart is the “son” of Mephisto, and as such is empowered by you playing a deck with Evil characters, much like Ghost Rider with Good characters. However, where Ghost Rider uses his Penance Stare to exact vengeance upon enemy characters, Blackheart simply uses it to make himself stronger. Sure, he clocks in at a meager 4/4, but feeding your KO pile with Evil characters can raise Blackheart to be the strongest character on the playfield, plus he has Flight and Ranged too. And unlike Ghost Rider, whose effect is a one-shot deal, Blackheart’s Created From Evil makes him stronger and stronger as long as Evil characters keep getting sent to your KO pile. It’s also worth mentioning that Created From Evil gives Blackheart +1/+1, not +1/+1 counters. This can limit the ways your opponent might try to overcome him. Blackheart can become gigantic and truly unleash hell upon an unprepared adversary.

So what did you decide? Good or Evil? Time to start thinking about it, because Defenders releases soon! In the meantime, make sure to tune in on Friday for our next preview article. We’ll be taking a look at the same character three times! Why on Earth-616 would we do that? You may think we’ve finally gone insane, but I can assure you it’s quite contrary.