Vs. System 2PCG Defenders Preview: Two Hel (and back)

The release of the first Vs. System® 2PCGTM expansion, Defenders, is less than two weeks away! We still have a few more previews for you between now and then, so hopefully that should make the time pass more quickly! This preview takes a look at two Underworld supporting characters that not only have part of a name in common, but also both of them are useful to push back against whatever machinations your opponent has planned.

First up is Helmut Zemo, a new 1-cost character for the Underworld team. Helmut is the son of Baron Heinrich Zemo, one of Captain America’s main and most well-known adversaries. Helmut blamed his father’s death on Captain America. He has become the new Baron Zemo and now seeks revenge on Captain America. One of the methods he tried was to make a new superhero “Avengers” team made up of villains in disguise. Similarly, in Vs. System® 2PCGTM Helmut Zemo will Sow Distrust among your opponent’s characters. 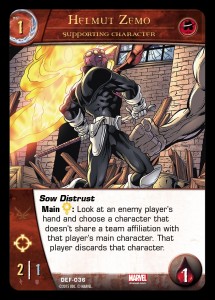 For the price of one

While many decks look to make benefit of a single team affiliation in order to take advantage of the ability to team attack, some decks do not. These decks look to simply use the more powerful characters from each team, hoping to overwhelm you with brute force. Helmut Zemo is a great early counter to these types of decks. Not only do you get to throw a monkey wrench in your opponent’s strategy by forcing a card discard (which also helps you to generate card advantage), but you also get an early look at your opponent’s hand, allowing you to prepare to tackle what will be played against you.

Our second preview card helps you fight back against your opponent using a different method. While Helmut Zemo prevents threats from reaching the playfield in the first place, Hellstrom seeks to give you control through being difficult to remove from the field. 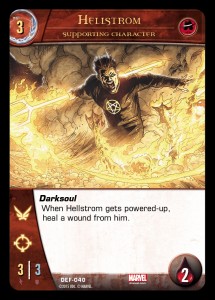 Hellstrom has 3 ATK and 3 DEF for a 3-cost character, which is slightly on the lower side, but his card is packed with features that make up for it. He has both Flight and Ranged, allowing you to attack from either of your rows and into either of your opponent’s rows. Plus, the Ranged will allow him to stun many characters before they can strike him back. Additionally, he has 2 Health, so you know he’ll stick around for at least a little while. How much longer he hangs out on your field depends on how well you can use his Keyword Power, Darksoul. Whenever you power up Hellstrom, you can heal one Wound from him. You can either discard another Hellstrom card to power him up or you can use other card effects that do that same. Powering up can be an effective surprise, letting you grab early advantage, and Hellstrom rewards you for it by being a constant annoyance to your opponent. His 2 health means that right out of the gate you may be able to KO two of your opponent’s characters. Darksoul potentially pushes that number even higher.

Is Helmut Zemo the disruption card you’ve been waiting for? What kind of decks do you think Hellstrom will work best in? Tell us what you think in the comments below. Our next Defenders preview is on Wednesday, and features the ultimate showdown between Good and Evil.