If you’ve been following our Vs. System® 2PCGTM Defenders expansion preview articles, you may have already noticed that we’ve only written about characters on the Defenders team so far. Sure, the expansion is called “Defenders” but does that mean that every card in the set is for just that one team? Every hero needs an adversary, right? The Defenders expansion is no different. In Defenders, you’ll find not only the Defenders team, but also a team of villains for them to battle, collectively called the “Underworld.”

Just like all other teams in Vs. System® 2PCGTM, the Underworld will have four main characters, each with two levels, and you’ll receive four copies of every Supporting Character, Plot Twist and Location in the box so you can build and battle with any deck you wish.

One of the most well-known villains associated with the criminal underworld in the Marvel Universe is the subject of today’s preview and one of the four Main Characters on the Underworld team. Bullseye has often been called the world’s most dangerous assassin, and for good reason. He has the ability to use anything as a lethal weapon. Therefore, it’s only fitting that in Vs. System® 2PCGTM, Bullseye does one thing and he does it exceptionally well: He inflicts pain. Lots and lots of pain. Let’s first take a look at his Level 1 and you’ll begin to understand why: 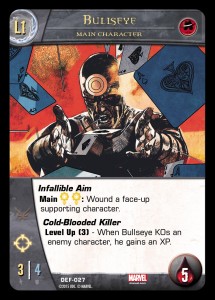 in the upper right corner of the card. It’s probably no surprise that Bullseye, a master sniper, has Ranged. Hide him in your Back Row and let him just sit there and pick off other characters. Which brings us to his first Super Power, Infallible Aim. For the price of two

, Bullseye wounds a supporting character without the need for combat. In a game where most Supporting Characters have only 1 Health, this is clearly a very powerful ability.

Along the same theme, his Level Up power, Cold-Blooded Killer, requires that he KO an enemy character. But what exactly does “Bullseye KOs an enemy character” mean? Well, you could use his Infallible Aim to inflict a lethal wound on a supporting character, which will net him an XP. There’s also the old-fashioned way, of course. If Bullseye participates in stunning a character in combat, he counts as having KO’d that character. Just get any combination of situations like these to gain 3 XP and you will be rewarded with his Level 2 card: 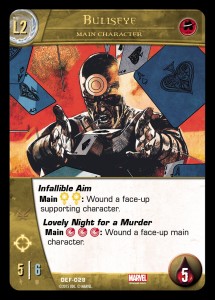 It’s a Lovely Night for a Murder, isn’t it? As you can see, Bullseye doesn’t mess around. He gets right to the point, and what a sharp point it is. An effect that wounds a Main Character is insane. Your Main Character’s health is your lifeblood in Vs. System® 2PCGTM. Naturally, anything you can do to put a wound on your opponent’s Main Character is beneficial to you. Additionally, maybe your opponent is protecting his or her Main Character in the back row and you can’t attack it. Bullseye doesn’t care. You also don’t need to compare ATK and DEF values in combat and risk plot twists or other abilities messing up your plans. In fact, you don’t need a combat at all. You’ll inflict this wound in the Main Phase – no combat necessary.

This leads into perhaps the most devastating aspect about both Infallible Aim and Lovely Night for a Murder. Inflicting wounds with these effects are outside the combat phase, and neither requires nor results in the recipient character being stunned. Why does this matter? Since inflicting a wound during combat is the result of a character being stunned, you usually only get to put one wound on an opponent’s character per turn (since you cannot attack a stunned character to do it again).

Bullseye gets around this. How? Keep in mind that while stunning a character puts a wound on it, putting a wound on it doesn’t stun it. You just put a wound on it. As a result, you can use Lovely Night for a Murder to wound a Main Character first, and then attack it normally in order to inflict two wounds to the same Main Character in one turn. This speeds up the game clock in your favor tremendously. Of course, an effect this powerful is challenging to pull off, requiring three

resources to be used, but the payoff is pretty high.

Are the wheels turning yet? Got any ideas for a good Bullseye deck? We’d love to hear about it in the comments! Defenders comes your way in two weeks on January 27!


Now that I’ve seen the 4 underworld main characters, I think bullseye is my favorite. Can’t wait to try him out next week