Last summer, Vs. System® made its triumphant return to the world of card games with Vs. System® 2PCGTM. With some streamlined mechanics and all new cards, Vs. System® 2PCGTM has gotten great reviews and has been a hit with players. Therefore, it’s with great pleasure and excitement that we bring you the first expansion to Vs. System® 2PCGTM, “Defenders.” Defenders releases in less than three weeks, on January 27, 2016! 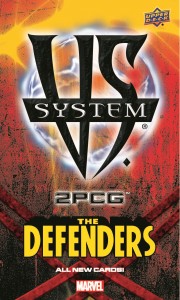 That doesn’t leave us a whole lot of time, and we’ve got a bunch of cool new awesomeness to talk about, so let’s dive right in! Defenders will bring two all-new teams to the Vs. System® 2PCGTM: The Defenders and The Underworld. Just like with the first set, “The Marvel Battles,” You will receive four copies of all the cards (except Main Characters) right in the Defenders box, so you will be able to build any deck you want right out of the gate.

But what deck to build? Don’t worry, we’re giving you a head start! As the launch date approaches, we’ll be bringing you previews of some of the cards in Defenders every Monday, Wednesday and Friday. “Wait a second,” you might be thinking, “Today’s Friday! Does that mean the first official preview article is today???”

Our first Defenders preview is appropriately one of the well-known members of the team, and also one of the eight new Main Characters you will find in the Defenders set: Luke Cage. 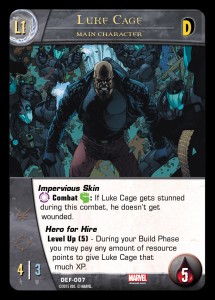 As with previous Level 1 Main Characters, Luke Cage’s Level 1 has a Super Power and a Level-Up Power. You may already recognize his Super Power. If you recall, Luke Cage was a Supporting Character in Set 1. He’s been promoted to Main Character for Defenders (the salary and benefits are much better, plus he gets his own expense account now). His team affiliation is the Defenders, as you can see by the

team logo icon in the upper right corner. His Super Power back in Set 1 as a Supporting Character was also Impervious Skin, and it functions the same way here. You can spend a

to prevent Luke Cage from getting wounded when he’s stunned during a combat, whether he’s attacking or defending (because it has the

Let’s take a look at his Hero for Hire Level Up power, since that’s what really makes this Level 1 really interesting. During your Build Phase, you can pay resource points that you would otherwise be using to recruit Supporting Characters and instead give Luke Cage that much XP. So on Turn 1, instead of playing a 1-Drop, you could give Luke 1XP right then and there. This opens up many different avenues for how you choose to level him up. Do you pay one on Turn 1, two on Turn 2, and then the last two on Turn 3? Do you play a 1-Drop, and then pay two and three the next two turns? Do you wait, and then pay all five on Turn 5? These decisions could be altered by what’s in your hand. Maybe you plan on being as resource efficient as possible, and only use any leftover resource points in case you drew poorly and had to underdrop (for example, playing a 2-cost character on Turn 3, and using that 1 leftover point to gain 1XP). Playing this one will definitely require some on-the-fly thinking. And yes, you might be down a character or two in board presence as a result, but that’s part of why his ATK is higher, plus his Impervious Skin will help you balance that out. Players who like to let the flow of the game dictate their playstyle will surely consider Luke Cage as one of their favorite main characters.

Wondering what you get for your resource point investment? Here’s Luke Cage Level 2: 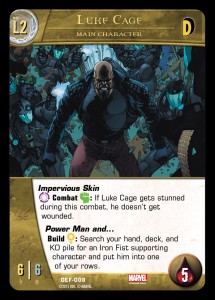 You’ll receive a solid 6/6 body, definitely strong enough to compete with other Main Characters. You’ll get the same Impervious Skin Super Power, which will continue to use your

to keep him from taking Wounds. And you’ll be able to complete Luke Cage’s well-known team up. Just use an

and you’ll be able to search anywhere to find Luke’s fellow Hero for Hire, Iron Fist, putting him directly into play without paying his recruit cost. All those resource points you spent to level Luke Cage up? You’re going to get them back in free Iron Fists!

“Wait a second,” you once again might be thinking. “There is no Iron Fist in Set 1. What Iron Fist are you talking about? Is that another new card???” There’s no getting anything past you. Did you think this was only a two-card preview article? NOPE! It’s a three-card preview article!!! So let’s see how Iron Fist factors into this battle: 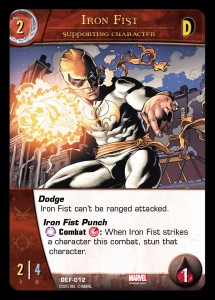 Iron Fist is a 2-drop with a respectable 2/4 stat line. Plus, he has Dodge, so he cannot be ranged attacked. However, it’s his Iron Fist Punch that teams him up well with Luke Cage. Just pay a

and any time Iron Fist strikes a character in a combat, that character is stunned. Even if Iron Fist and his little 2 ATK goes plowing head-first into Adam Warlock’s gigantic 13 DEF, Adam Warlock still gets stunned by the power of the Iron Fist. Sure, Iron Fist and his one Health will probably bite the dust and be KO’d, but so what? He was a free 2-drop that just stunned your opponent’s most dangerous character. And he’s pretty expendable, since you can possibly use Power Man And… repeatedly to grab more free Iron Fists and do it again! The Heroes for Hire are a great one-two punch in the comics, and they are not any less devastating in Vs. System® 2PCGTM!

We hope you enjoyed the first of many preview articles for the Defenders expansion. Next week, we’ll have more articles coming for you, starting with a pretty sweet combination of power and control on Monday. These two will be “Hex”-tremely popular cards, without a doubt!