One year ago, Upper Deck announced at Gen Con 2014 that Vs. System was coming back. Ever since that day, players have been anxiously awaiting to unwrap the box and see all of the new cards for themselves. Players finally got that chance last week at Gen Con 2015, when Upper Deck launched Vs. System 2PCG to much excitement and an almost insatiable demand. And what better way to herald the arrival of the new incarnation of Vs. System than with a 10K? But this wasn’t just any constructed 10K, for players had no idea what most of the cards in the set would be.

Players had two days to open the box, study all the cards and build the best deck they could to overcome a field of 199 players, all tasked with the same challenge. Out of the 16 Main Characters in Vs. System 2PCG, every single one of them was represented in the field, and half of them had double digit number of players building a deck around them. 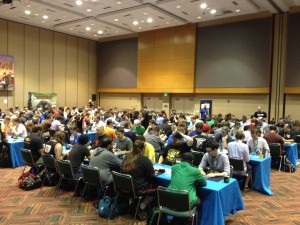 After nine rounds of Swiss format qualifying, the Top 25 players cashed in the event and the field was whittled down to the Top 8 for a single elimination bracket to determine the winner. After The Quarterfinals and Semifinals, the Top 8 was pared down to 2. Only Sal D’Agostino, piloting Star-Lord, remained against Michael Barnes, running a Storm deck that took the tournament by… well… storm! 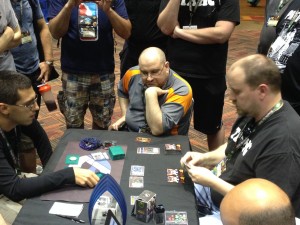 While Barnes came out strong and took a quick lead, his deck unfortunately decided the Finals would be a great time to deprive him of the Locations his deck needed in order to fuel Storm’s Level Up power. Sal was able to make a comeback, and Barnes never recovered. Sal D’Agostino was named the first ever Vs. System 2PCG World Champion, and for his efforts took home an awesome trophy and a first place check for $5,000! 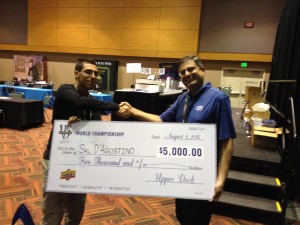 Here is the final count for how many decks ran each of the 16 Main Characters: