As many of our customers witnessed themselves, the recent roll out of 4 highly anticipated new releases at Gen Con Indy far exceeded any and all expectations Upper Deck had anticipated. With tens of thousands of gamers in attendance, crowds were extraordinary throughout the weekend. 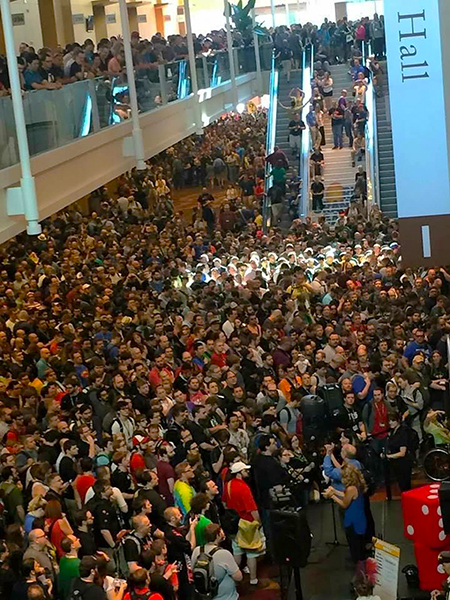 Fans were chomping at the bit to get into Gen Con each day with many excited to check out new offerings from Upper Deck!

The demand for purchases and demos of Firefly: Shiny Dice, Legendary Encounters: a Predator Deck Building Game, Vs. System 2PCG, and Legendary: Secret Wars, a Marvel Deck Building Game caused such a surge that Fire Marshals were called in to handle the lines that wound through and around the Upper Deck booth, spilling into the convention hall as fans amassed to get copies of the new product releases. After assessing the situation, the Fire Marshals decided in the interest of safety, and had to cut the lines off. 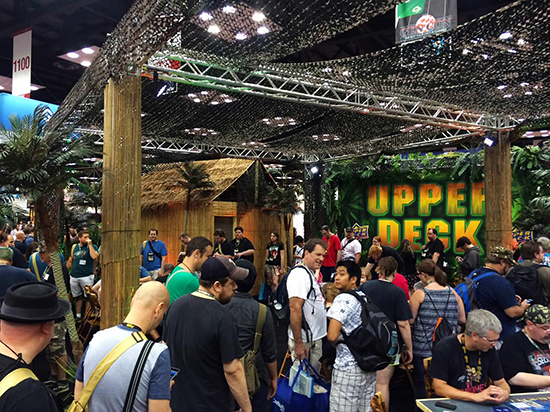 This photo was taken shortly before Fire Marshals decided to shut down Upper Deck’s line for the sale of new gaming releases.

“It was like nothing I’ve ever seen,” said Jason Brenner, Upper Deck’s entertainment brand manager. “There was no way to keep up with the demand from traffic coming through the booth. Luckily, we were able to get enough pre-release product to get us through most of the weekend before Legendary Encounters: Predator, Marvel Legendary: Secret Wars and Bring Out Yer Dead sold out on Sunday.” 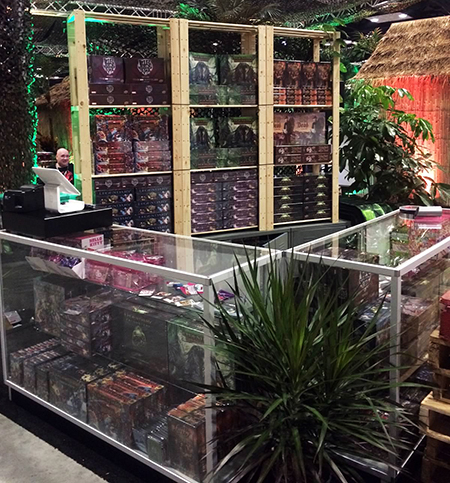 Upper Deck was prepared for interest in the company’s new releases with a stocked booth for purchases. 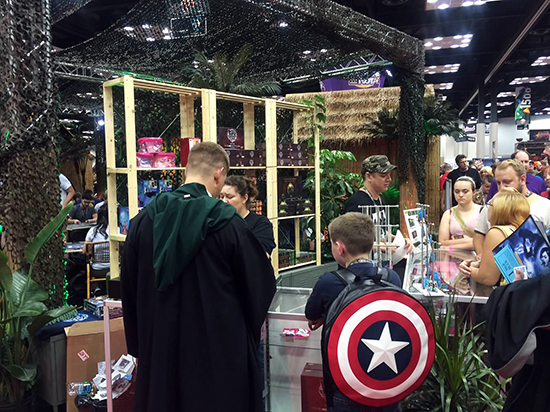 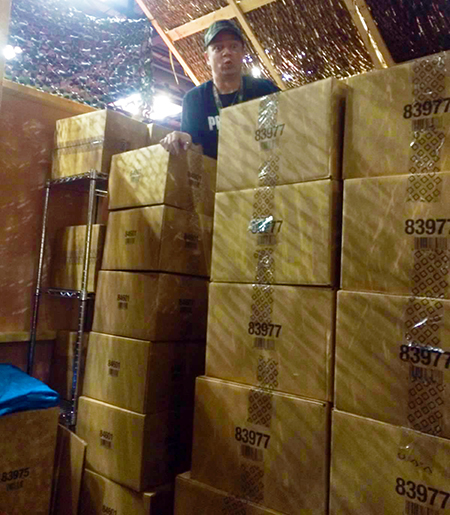 Despite a significant amount of product stored right in the booth, Upper Deck ultimately sold out of many new releases by Sunday of the show.

The demand for the new releases even extended into Upper Deck’s Organized Play area, with tournaments selling out in record time – creating a shortage of staff for previously scheduled side events like win-a-box games, demos and beginner events. Unfortunately, to accommodate the swell of new tournament players, many of the small side events had to be cancelled and money refunded to players that had already registered. 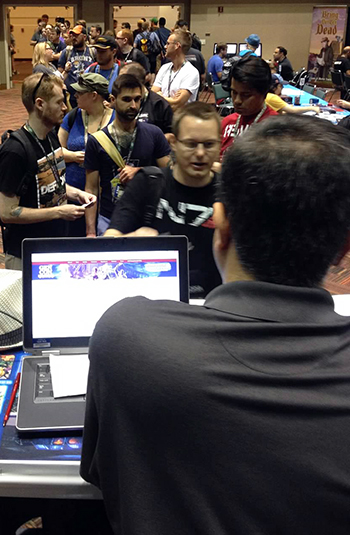 Lines to participate in Upper Deck sanctioned events stretched across the tournament hall! 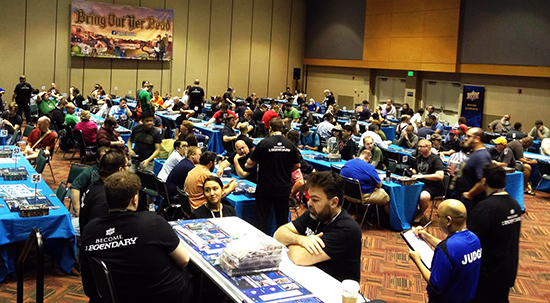 Tournaments were sold out each day.

“This was the first time we released so many new products at once, all with OP events to support them,” said Jeff Piroozshad, Upper Deck’s entertainment marketing & organized play specialist. “We did not anticipate such a huge demand, and are already working with Gen Con on expanding our space and increasing our staffing for next year. It’s a terrible feeling to have to cancel events for fans who are excited to learn and play our games. Our whole team would like to extend a sincere apology to our fans, and we want them to know that we are already hard at work on ways to make the OP experience better for everyone. Delivering an epic experience is a top priority for all of us at Upper Deck.” 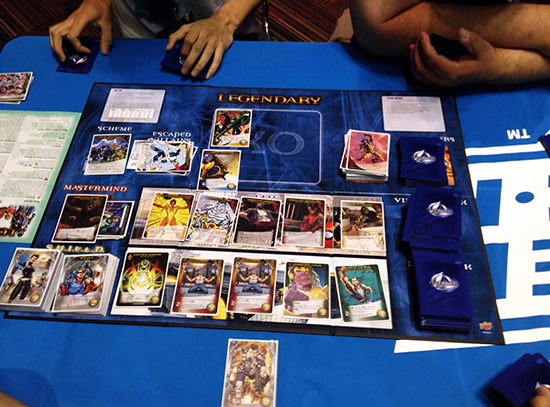 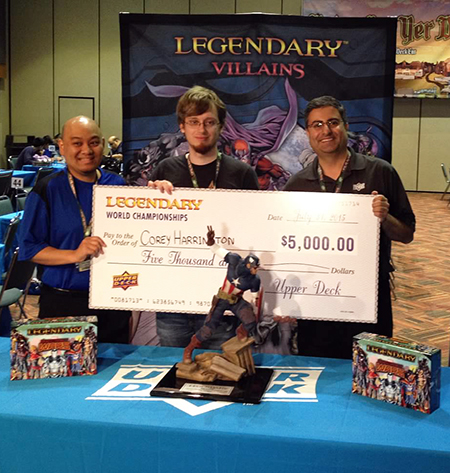 Not only did the winner score $5,000 from Upper Deck, but he also won a sweet Captain America Trophy! 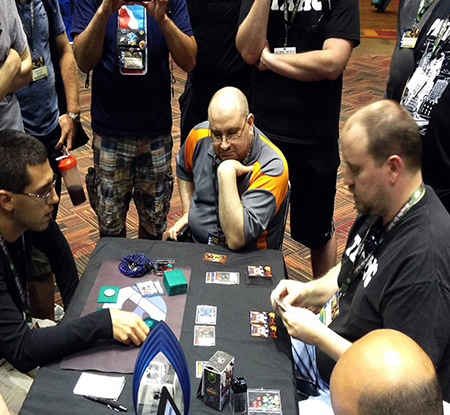 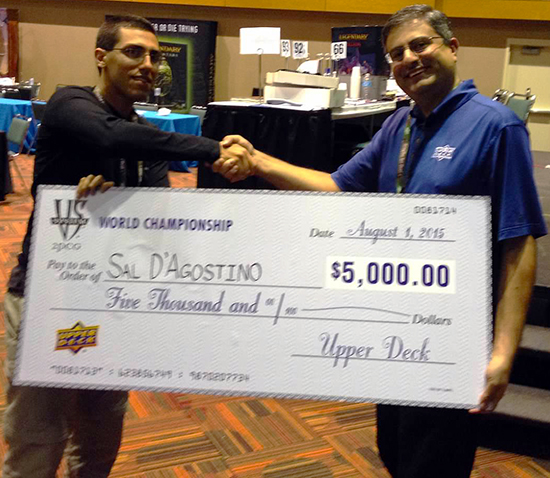 Ultimately the winner was crowned and everyone who tried out the new version of the Vs. System appeared to enjoy it!

Additionally, Upper Deck is looking to grow the company’s network of volunteer staff and judges for events like Gen Con to support a larger number of players. If you are interested in working with Upper Deck in our Organized Play division, especially if you are within driving distance of Indianapolis, please email us your resume at legendary_events@upperdeck.com. In particular Upper Deck is looking for candidates who have experience in gaming, are well versed in Upper Deck’s games and most importantly, who love interacting with the gaming community. 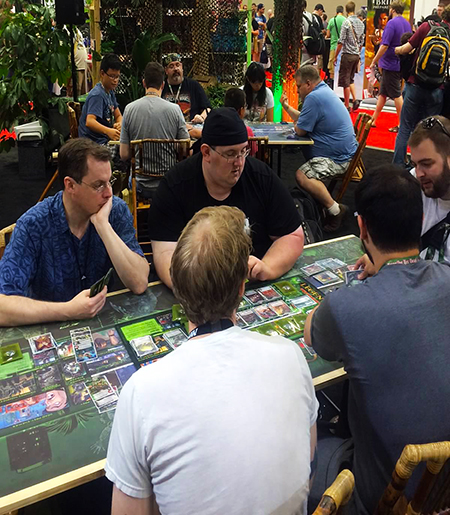 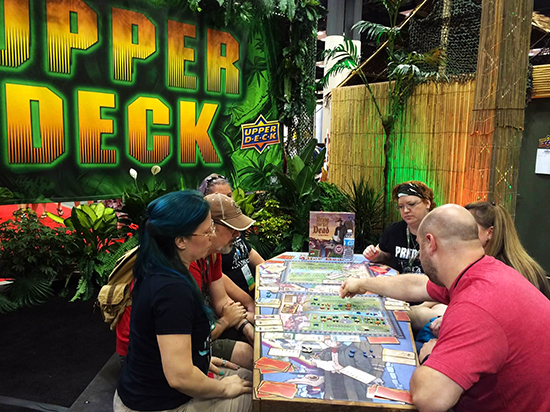 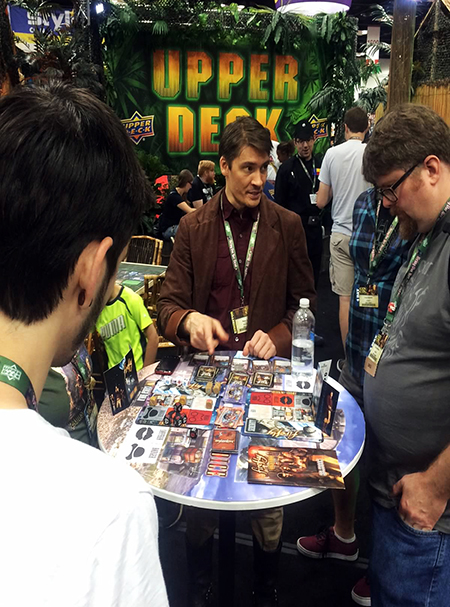 Thank you to everyone who came out to support Upper Deck’s games and events at Gen Con. We are committed to improving the customer experience and making Gen Con Indy 2016 bigger and better than ever!


Huge Kudos for Legendary – excellent game. Looking forward to seeing proper tournaments in the UK. Congratulations to all concerned with the game and it’s design.

Disappointed by VS2 – as I have said elsewhere – this should have been compatible with VS. A shame. (However, contrary to popular rumor, I WOULD still play it…


I love this game very muche! Nice to see it here