Welcome to the first official preview for Vs. System 2PCG! We will be doing a few of these previews in the coming weeks. In each preview, developers Danny Mandel and Ben Cichoski will showcase different types of cards and card mechanics that you’ll want to become familiar with when Vs. System 2PCG launches. So without further adieu, let’s get started! 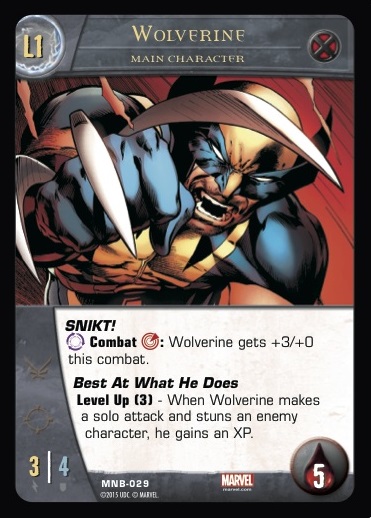 This is the Level 1 version of the Wolverine Main Character. Let’s take a quick look at the elements of his card.

Level Number: The top left of a Main Character shows what level it is. Level 1 versions have silver card frames and Level 2 versions have gold frames.

Name: Found at the top middle of the card.

Card Type: There are four card types: Main Character, Supporting Character, Plot Twist, and Location. This is underneath the Name.

Team Affiliation: Found at the top right. Each team has their own symbol. Team Affiliation is used to determine if two or more characters can attack together (called a team attack), which Plot Twists you can play, and whether Special Locations can be used with a character.

Text Box: Found underneath the card image. There are three types of powers in the game: Keywords, Super Powers, and Level Up Powers. Keywords simply have instructions to follow, Super Powers are activated, and Level Up powers determine how Main Characters gain Experience (XP).

Flight and Ranged Symbols: Found to the left of the text box. Flight and Ranged give characters more options during combat. A character can have Flight, Ranged, both, or neither. These symbols are either active or inactive depending on whether the character has Flight or Ranged.

ATK and DEF: The two numbers on the bottom left, below the Flight and Ranged symbols, are a character’s combat stats. During combat the attacker and defender compare their ATK (above the lightning bolt) to their foe’s DEF (above the shield) to see if any characters in the combat get stunned.

Health: Located at the bottom right, a character’s Health tells you how many wounds it takes to KO that character. Most Main Characters have 5-6 Health. Most Supporting Characters have 1-2 Health.

The “3” is how much XP Wolverine needs in order to Level Up. Each time he attacks alone and stuns an enemy, he’ll gain an XP. Take an XP counter that comes in the box and put it on his Level 2 card which starts out of play. Once he has 3 XP, he instantly levels up and you swap in his Level 2 version. As you can see, when a Main Character levels up, it gets a stat increase and a new Super Power. (Note: Its starting Super Power remains the same.)

When you swap in the Level 2 version, it retains all other current characteristics from its Level 1 version. This includes its orientation (ready/exhausted or stunned/face-up), any +1/+1 or -1/-1 counters it has, and any other modifiers.

The game’s initial set has 16 Main Characters (4 for each team), and each one has a different Level Up power. Here’s another example: 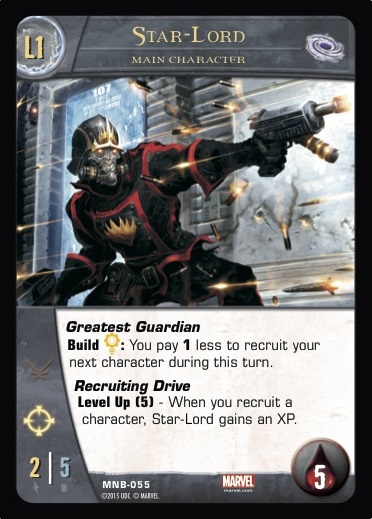 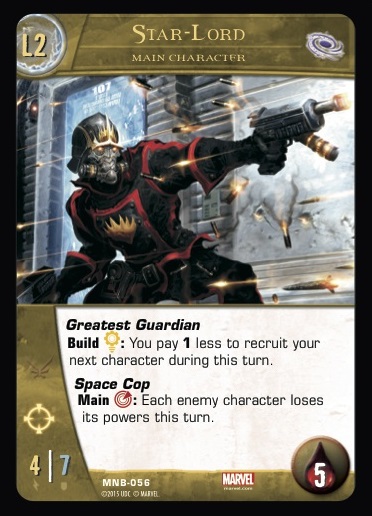 Each team also has several Supporting Characters, such as the X-Men’s Beast: 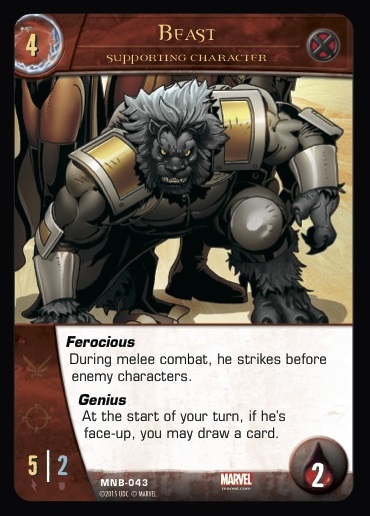 Each Main Character in the set also has a Supporting Character version.

You can Power-Up during combat (attacking or defending) or during your Main Phase outside of combat. (We’ll cover the phases of the turn in a future preview.)

I hope you enjoyed today’s preview of Main Characters and Supporting Characters. Next time we’ll take a look at Super Powers and Locations. Excelsior!


Very nice… like the different powers on the main characters.

Also gives us a benchmark for how the previously spoiler characters stack up….

The more I read, the more excited I get…


Love the new look and game play! So excited to actually play!!!


What do the symbols in the text box represent?

Is the purple one an Activate symbol? The red and yellow symbols are phases?


Stay tuned for our next preview article on Locations and Super Powers. It should answer this question!


“In the next few weeks” – So does this mean there’s no chance of seeing the game until August at the earliest? 🙁


Vs. System 2PCG releases at Gen Con, which starts in July.


How does Beast work with team attacks, both participating in one and defending against one? What happens when two Beasts enter melee combat?

If Beast gets melee team attacked (and he’s the only Ferocious character in the combat), he’ll strike before the attackers. If he has enough ATK to stun an attacker, that will remove that character from the combat, and then combat will continue normally. Then the remaining attackers will strike Beast. (Beast doesn’t get to strike a second time.)

If Beast attacks Beast they’ll strike at the same time.

Note: There’s no window to play Plot Twists or use Super Powers in between when Ferocious characters strike and everyone else strikes.


Will there be DC Comics cards also? I do a weekly game review show on YouTube, would love to review it!


How long after GenCon for the actual release?


In the original Vs System, “power up” and “+1/+1 counters” were separate mechanics. Per the wording here, it sounds like they have been combined.

So, when a character gets powered up now, it gets a +1/+1 counter. How long does it get to keep this counter? Just for that attack? For the entire combat phase? Until it gets KO’d?


If main characters are never shuffled into the deck, why not make their level 1 and 2 versions two sides of the same card?


Character cards flip over when they get stunned. If Main Characters were double-sided it would be confusing telling the difference if a Character is Level 1 or 2, or just stunned.


Ahhhhhh auguest 5th so far away. Been waiting for this for to long.


So old cards cant be used in a 2pcg game obviously – tournament or otherwise. But the 2pcg cards can be used somewhat in a old vs game ? I mean all you have to do is ignore the health – yes ?


No, because the attack and defense stat curve is way different than the original. For example, the 4 drop Beast in this article is a 5/2, in the original game the average 4 drop character is a 7/7. The new cards will be way under powered in regards to stats if you added them to originals cards.


Someone mentioned on the Facebook page that if a character’s DEF is 0 or less, it becomes stunned automatically.


This looks great. But I would like it better if the leveling up changed the character picture.