LeBron James is one of the greatest players in the history of the NBA , he is the current face of the league and arguably one of the most famous athletes in the entire world. “King James” has taken his rightful seat at the throne as NBA Championships, MVP awards, and other accolades have led to his rookie cards being some of the most sought after and valuable cards in the hobby today!

LeBron James 2003-04 rookie cards have been fan favorites ever since the Cleveland Cavaliers drafted him. At the time Upper Deck signed LeBron James to an exclusive deal for autographs and memorabilia serving as the only place to get signature cards of King James for over a decade now. By responsibly managing the category, limiting the amount of signed cards of James released to the market, his autograph value remains the highest of all active NBA players, but none more so than on his rookie cards from Upper Deck. 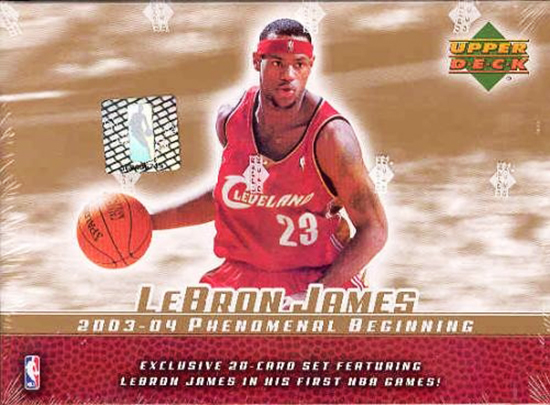 With his autograph cards carrying such a premium, many fans work to collect some of this unsigned rookie cards from Upper Deck and there are certainly plenty of options there. Upper Deck created a few box sets for LeBron James like Phenomenal Beginning and a rookie box set that are loaded with cool unsigned cards from his freshman year in the NBA. I like some of the more unique cards though. Having collected for years and having been a fan of cards from his rookie year, here is my list of the Top 10 LeBron James Rookie cards: 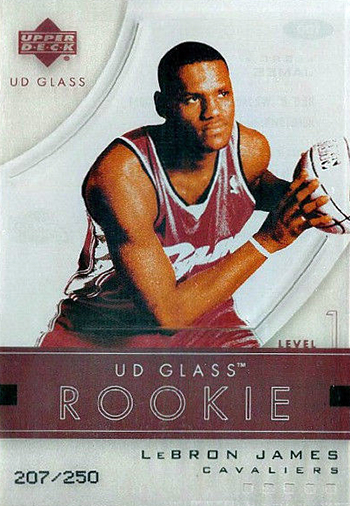 What makes this card so unique is the fact it is printed on plexiglass so you don’t have to worry about dinged corners. The design of this card is one of the coolest LeBron rookie cards around as it appears he is looking to the future. It was also numbered to just 250 copies making it rare, but not impossible to find! 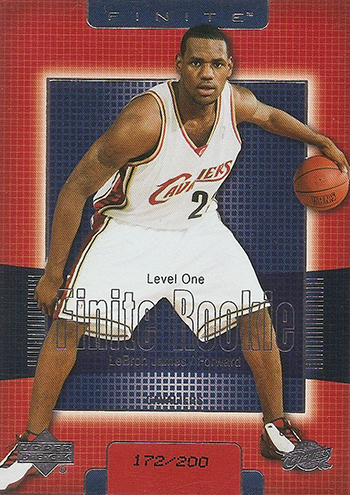 What makes this card cool is the contrasting colors in the background that really make LeBron stand out. This product was only sold to hobby shops so the set was geared to collectors. With just 200 total cards printed this is also one of the rarer rookie cards of LeBron James that doesn’t feature an autograph or memorabilia swatch. 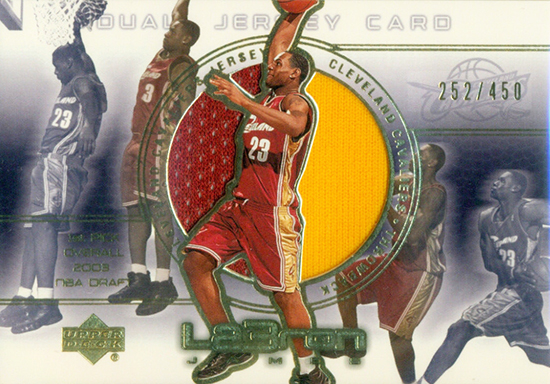 Despite this card being numbered pretty high, many went right into private collections as they were only distributed to employees as a gift for their hard-work. It features a really cool time lapse image of LeBron dunking and also features a double swatch of the Cavs current and throwback jersey at the time! 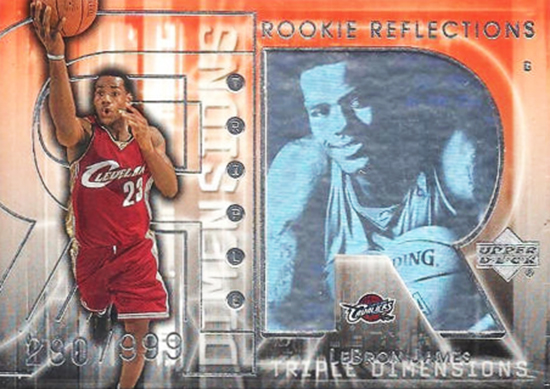 The high numbering of this card makes it one of the most popular and affordable rookie cards around for “The Chosen One.” The card features a great design, but the hologram inclusion of LeBron really makes it stand out as different. 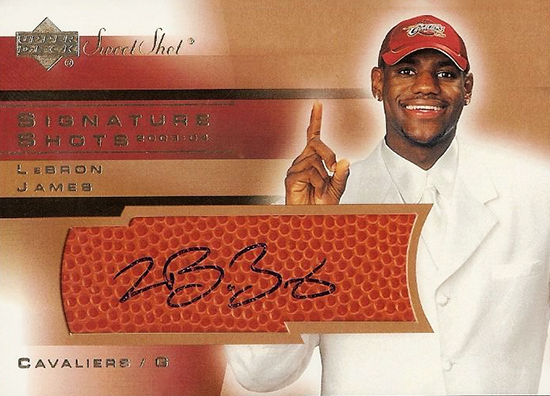 What makes this card stand out more than other cards is the fact LeBron signed a surface that looks and feels just like a basketball. These cards are pretty rare, but they definitely standout showing LeBron with a sweet draft day photo for the Cavs. Worthy to note, there are also some cool jersey and technology rookies of LeBron in this Sweet Shot set giving collectors lots of options. 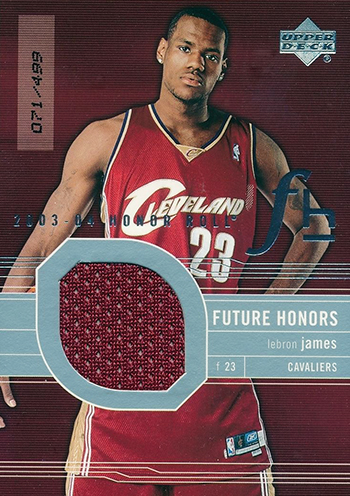 Numbered to 499, this card was one of the first player-worn jersey cards of LeBron released. There is a pretty sweet rare version numbered to 25 that also includes LeBron’s autograph, but you just don’t see those pop up much anymore as many are in private collections. 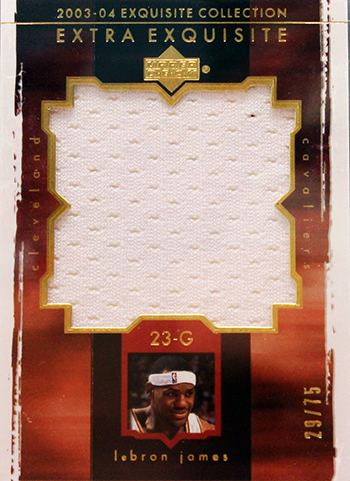 What makes this card unique to all the other ones on this list is that this card was one of the first jumbo swatches of LeBron to hit the market during his rookie year. It features a nice big chunk of his jersey right in the middle of the card and the background really makes it stand out. It is limited to just 75 copies and there is also a parallel version numbered to 25. 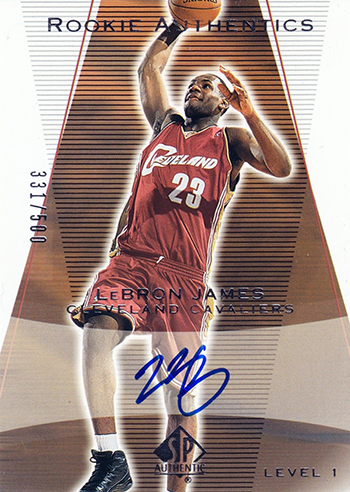 Now this one isn’t numbered as low as the #1 and #2 cards, but what sets this one aside from the other cards is its unique bronze background which looks great behind the wine color of Cleveland’s uniforms! This card is also one of the most popular autographed LeBron James rookie cards because of the iconic nature of the SP Authentic set. 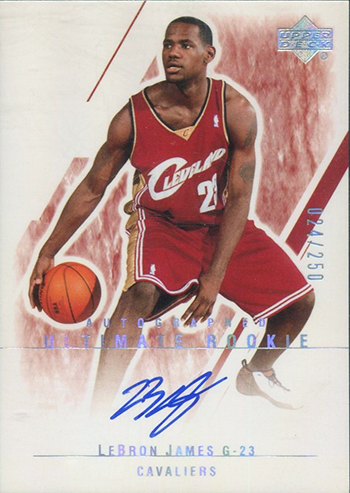 What really makes this card stand out is the sleek design with rainbow foil coupled with the fact it was produced on a very premium and thick card stock which scans don’t show. A lot of speculators invested a lot at the time in these cards and you seldom see them pop up at auction and when you do, they sell for thousands. 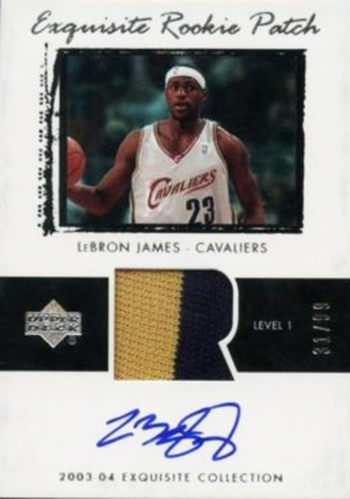 This card is the holy grail of LeBron James rookie cards. It is also arguably the most iconic basketball card in the history of the hobby. A collector just invested $90,000 to own this card. It is one of the few trading cards that can put your kid through college. Just imagine opening a pack and finding one!

Looking at this list may leave you a little overwhelmed. The truth is, there are a variety of Upper Deck LeBron James rookie cards for everyone’s budget. Check them out and find one worthy to add to your collection!