As the father of two young boys, I know they are not really ready to experience the fun of sports cards yet. As a rookie dad I remember giving my first son a card when he was just one and he almost took his eye out with the corner.

He’s older now and has enjoyed Upper Deck’s Marvel cards, but I want to be a little careful with how much superhero exposure he gets as he is only three-years-old. Besides superheroes, he loves dinosaurs. I mean, what youngster doesn’t love dinosaurs? And when I heard Upper Deck would be releasing a set of Dinosaur trading cards this summer, I knew I’d be using a bit of my paycheck on that product for him. 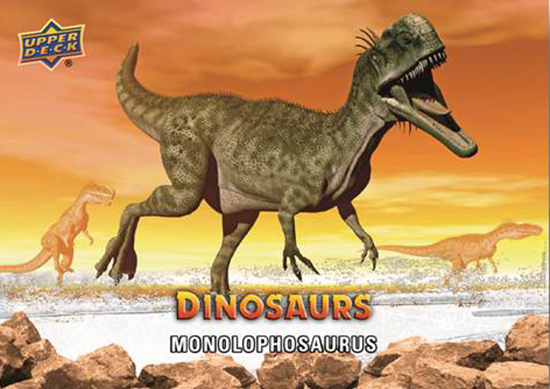 Fans have been buzzing about the release of Upper Deck Dinosaurs ever since we first shared the incredible artwork from the set, showed off the stunning hand-drawn artist sketch cards and gave a history of dinosaur fossil cards. Collectors have shared their excitement on a variety of social media platforms:

Rev. Dedric Leboeuf ‏ – When are your Dinosaurs boxes being released? I want to bust a box with my daughter. #winning #collect

Derek Turnbull – I’m gonna collect this set for sure.

Scott T Smith – The wait is unbearable! How much longer until Dinosaurs 2015 arrives?

John Forro – This is a set I would start to collect. 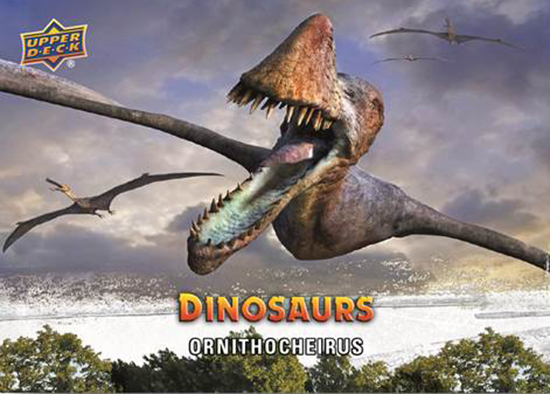 For me as a dad though, Upper Deck Dinosaurs represents the first time I could share the hobby with my son by putting a set together and talking about the cards. This week we got in some sample packs of the new Upper Deck Dinosaurs set as well as the first samples of the ROAR! audio cards. I just couldn’t wait to share them with my son James and his best friend Jack. Check out their reactions to the set and the audio cards.

I just loved my son James’ expression when he hears these audio cards. We must have listened to them about 25 times and he was totally entranced by them. 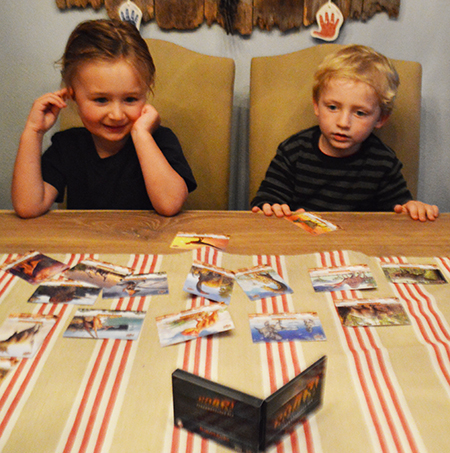 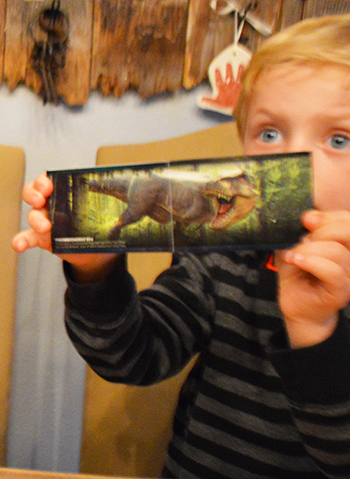 The boys really loved picking out their favorite cards as well and we had a good time after the video talking about each of them. There is absolutely an educational element to these cards where kids can learn while having fun with them. 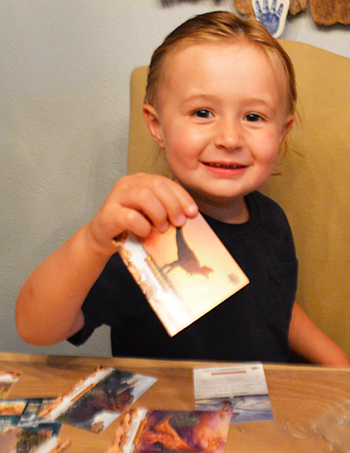 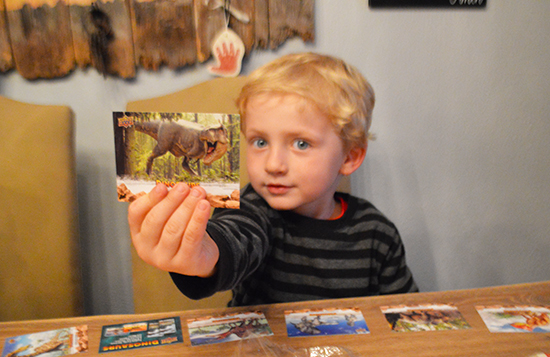 More than anything though, the boys had ear to ear smiles while experiencing them and seeing your kids smile like this is hard to put a price on. 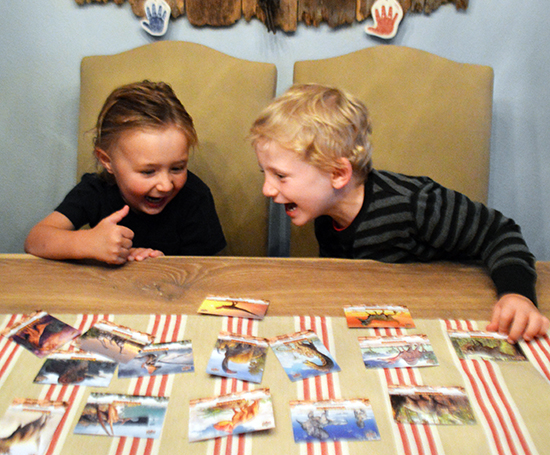 Here is more on the set from an interview at Toy Fair!


My almost 3-year old son would absolutely love these! He’s already in love with baseball cards and football cards; I had to give him some of his own so that he wouldn’t come after my collection. He’s also obsessed with dinosaurs right now and this would be right up his alley. I’ll be looking for them when they hit the stores.


I’d love a pack of these to share with my son ! Great job Upper Deck. Your subsets even have adults excited. I want a fossil card !!


Those cards look amazing. My son would love those because what kid doesn’t love dinosaurs. He is not ready for sports cards yet but this would definetly spark an interest in card collecting.


When is this going to be released? Is it already released?

I couldn’t agree more: this is going to be the first card set I introduce my daughter to. It would be great if they were out by Father’s Day – that would be an awesome way to spend the day.

Thanks for releasing this set, it looks great!


I think the Dinosaur set would be a great way to get my son into cards, he likes watching hockey but doesnt care for cards and he’s almost 5. This would be great exposure to trading cards and could lead to him wanting other types/sports 🙂


My 11 year old son is intrigued as much as me when it comes to dinosaurs especially since we are owners of a bearded dragon. I loved to collect baseball cards as a child and played with dinosaurs. Our newest bonding times is collecting cards, mine being baseball and him basketball. Our favorite set is Goodwin champions cause of the etymology cards. I would love to surprise him with a pack. Great llooking product.


I think these card with their great graphics and info would be a great way for my kids to learn more about the intriguing world and habits of the dinosaurs. It would also be a great way to create a hobby of card collecting with my daughter where we currently don’t share a common theme of collecting and would be a Jurassic juggernaut of new exploration for one of my sons favorite interests, DINOSAURS!


My son LOVES Dinosaurs!
These are not only educational
but also look like a fun collection to own!


I cant wait to get my sons some of these cards!…they have been so excited to to get these since i showed them…they are huuuge dinosaur fans @6yrs old and 4 yrs old this is a great hobby to get them started on…and hopefully lead into baseball and football when they get older. Please let us know when these are available for sale as i would like to purchase them immediately! Thanks again for creating these!


The kiddo is almost as excited for these cards as I am. As a dinosaur fan since childhood I raised my daughter teaching about dinosaurs and prehistoric earth. She started collecting fossils at age 5 when I took her to a local marine fossil site and she found her first fossil shells, this quickly evolved into collecting dinosaur fossils and coprolites. Being born well after Jurassic Park 3, she’s had very few opportunities to get dinosaur trading cards (something I loved collecting when I was a kid) and she can’t wait to get the tins and hobby packs when they come out. It’s going to be interesting to see whose collection ends up larger once these release… and since there’s at least two of us collecting that means we’ll be able to do what’s the most fun about collecting cards, trading them to complete our sets and get the cards we really want!


My son’s just turned four and loves helping me with my card collection, opening packs and sorting through the finds – he’d love some dinosaur-themed cards to add to his own collection and show off to his friends!


My 4 year old would love these. Just the other day I went to the section of the local Target that has trading cards and such. He wanted to look at all of them. This idea is a winner!!


My son has been learning and researching dinosaurs for almost an entire year now. 9 years old and he wants to be a paleontologist. Loves Jurassic Park and can came dinosaurs by their actual names. Since he has difficulties reading, anything that I find that encourages him to read, I usually buy. These cards seem like just the thing.


Have always loved Dinosaurs…looking forward to the new Jurassic World movie. I haven’t even gotten the kids into another favorite of mine LEGO with their Jurassic World series!


These would be awesome for a child who is into trading cards. The sound element alone make for a great collecting hook.

Move over baseball cards. Dinosaurs are coming and are vocal!


Those cards look awesome, I’m a huge Dinosaur fanatic and will love them!!!