The Chicago Blackhawks have a future in their rookie goaltender, Scott Darling. In his young 14-game NHL career, the 26-year-old has shown that no task is too tall and no stage is too daunting. Thrown into the second period after the Nashville Predators hung an early three-spot on Corey Crawford, Darling was tasked with one job: stop the bleeding. In his first career playoff appearance, the homegrown talent helped save the Blackhawks from falling into an early 1-0 series hole after shutting down 42 shot attempts. Chicago’s captain, Jonathan Toews, along with goals from Niklas Hjalmarsson and Patrick Sharp, helped lead the comeback. Duncan Keith sealed the contest with his double-overtime one-timer from the blue stripe to give the Blackhawks the 4-3 win.

Whether or not Darling gets the net in Game 2 is still up in the air. Blackhawks head coach, Joe Quenneville, said he will announce the call later this afternoon. Regardless of the decision, if you’re a Blackhawks fan, it has to be reassuring to know that there’s a trustworthy alternative if the floodgates open. We’ll see you Friday night for Game 2.

In the spirit of Throwback Thursday, let’s put up a throwback card and see if our fans can come up with some creative captions for this rookie! Please share your comical caption to this card for a lucky fan’s opportunity to score 5 packs of 2014-15 O-Pee-Chee Platinum Hockey Cards! 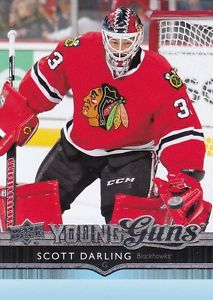 
Darling sings to himself: “I’m so pretty, oh so pretty…”


even in slow motion I look good


“This is way better than the PlayStation Game”


“With gear like this I can backstop the Cubs to the World Series too!”


What a darling performance my Scott last night to earn the W for the Blackhawks in double OT!


I wish this was a Drakes Ring Ding.


What if I fall? Oh, but Darling what if you fly?


I have an itch and I jut can’t scratch it right now!


Oh! Darling, we believe you
You’ll never do us harm


“These Darling pucks always go in my Darling glove, and that’s just Darling”


Be a darling, will ya Scott?


If you’re reading this, I already made the save – Scott Darling


Go away puck. The force will not allow you to enter the net.


Hey this Guy Use to play for the Knoxville Icebears in the SPHL that are in the Spgl Finals Rightnow! Thats all for the history now for the caption. ” I like being in net because i like catching pucks that crawford misses!”


Coach, I’m now your Darling, so let me play!


My impression of the Hamburgler flipping a patty. Hope to play against him in the finals.


What league was I last year? The ECHL? I guess I should pose for my Young Guns card. Let’s get the boys from Upper Deck a save and that would be just darling.


Not sure if that black thing is the puck or one of Mom’s “chocolate chip cookies….”


I nicknamed my jock “Stanley Cup”.


Hey is that a Ding Dong or a hockey puck???


They may call me Darling, but I’m your worst enemy.


Scott is the “Darling” of Young Guns!


Puck coming up on the left, right to the glove, close it up and toss it to the ref! One save down and many more to go!


There hasn’t been a Blackhawks spread this Darling since Eddie the Eagle!


Darling, the legs aren’t so beautiful, I just know what to do with them


Why does it always say my comments are awaiting moderation?


Hey guys you announce the Winner of this caption yet?? There are some good one’s to choose from 🙂


Congrats to Mike H.! Your witty comments have scored you packs of 2014-15 O-Pee-Chee Platinum Hockey Cards! Thank you to everyone for participating and we hope to see your comments again soon.