Bright lights. Red carpet. Prime-time television. Center stage at the Auditorium Theatre in Chicago. Anxiously waiting to hear your name called upon by the commissioner. It is the culmination of unrivaled dedication, a relentless work ethic and a fearless attitude that have guided these individuals to create this signature moment.

Tonight, the 2015 NFL Draft kicks off at 8 p.m. ET. For the 253 individuals that will be drafted, this is the ultimate dream. And for some, this will be their first job ever. The players who capitalize on this grand-scale opportunity and who diligently manage all of the hype will turn the dream into reality. Otherwise, one may quickly discover the NFL’s alternative meaning; Not For Long.

In the spirit of Throwback Thursday, let’s wind back the clocks to the 1991 NFL Draft.

With the 33rd overall pick in the year’s draft, the Atlanta Falcons selected the lauded University of Southern Mississippi quarterback, Brett Favre. The 22-year-old had barely settled into the Atlanta suburbs before he was quickly shipped off. In his rookie year, he lined up under center for just two games after tossing two of his four total attempts into the hands of the opposing team.

One man’s trash is another man’s treasure.

A dormant Green Bay Packers team that had been wading in a two-decade drought desperately needed an identity. General Manager, Ron Wolf, resurrected the organization by swinging a masterstroke trade for No. 4. Favre would go on to call Lambeau Field his home for 16 of his 20-year career. After all the milestone accomplishments and iconic memories made with the Green and Gold, the Mississippi native will be returning “home” this year for the first time since the 2010 season when he was the signal caller for division rival, Minnesota Vikings.

On July 18, Favre will be inducted into the Packers’ Hall of Fame and his jersey number will be retired. But it won’t be until Thanksgiving night when the Pack host the Chicago Bears that the No. 4 jersey will be placed into the rafters.

This year’s draft is loaded with highly-touted quarterbacks with franchise potential. Who knows, maybe the next Brett Favre is among this year’s class.

Let’s see if our fans can come up with some great captions for this card! Please share your comical caption for a lucky fan’s opportunity to score 8 packs of 2014-15 Upper Deck Football Cards! 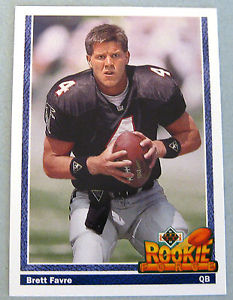 “I wonder what Green Bay is like this time of year!”

Time to Win a Few Rings!

Now if I could only find my helmet…….maybe the packers got one I can win a few Championships in?

“You are trading me to Green Bay? I’m a future Hall of Famer”

Wow the NFL ball are different to my college Footballs.

I left the oven on at home!

Man I wonder if I left that tractor running or not???

GRRRR! I’m wound tighter than the laces on this football, so I’m gonna take this QB job for myself, and by golly, nobody else can take it from me!

I’m being traded where? Where is Green Bay?

BRETT FAVRE WALKS UP TO SHAKE THE COMMISSIONER AND SHAKES HISB HAND AND SAYS, ” IT’S BRETT FAVRE, THAT’S IT I RETIRE AND WHERE ARE MY WRANGLER JEANS AND COPPER FIT BRACES?”

BRETT FAVRE IS ABOUT TO WALK OFF THE STAGE AND INTO HIS PICK UP TRUCK AND WALKS BACK AND SAYS I’M BACK AND PUTS ON HIS FALCONS DRAFT DAY HAT.

AND…THAT IS HOW YOU RETIRE 3 TIMES, WEAR EVERY JERSEY COLOR ON THE RAINBOW, BECOME A TV COMMERCIAL ICON, THE RICHEST LITTLE LEAGUE FOOTBALL COACH OF ALL TIME AND THEN A LEGENDARY HALL OF FAMER.

WE ALL THANK YOU BRETT!
I GOT ALL OF THAT OFF OF HIS UPPER DECK ROOKIE FORCE CARD..GOOD LUCK COPYING THIS LOL

Marcus, (Mariota) here eat a Snickers you’re such a Favre when you’re hungry…

Now I know.
Where Tom Brady gets
His Hair cut from!

I’d rather be wearing a pair of Wranglers!

Wow! This is Hotlanta! I need to go somewhere a bit cooler!

Go ahead and try to take the ball!

I cannot believe this! Yet another under-inflated Patriots game ball!

Unlike Brett Farve, you will never retire in your hobby collecting days

As a 40 yr old rookie, i prefer to play in wranglers

‘Mirror Mirror on the wall…who will the best of all”

I think that guy stole MY bike!

THESE ARE NOT WRANGLER FIVE STAR JEANS!!!!

Playing football at West Canaan may have been the opportunity of your lifetime, but I don’t want your life!!!!

Favre contemplating how to take a selfie before selfies are discovered.

I AM HERE TO PLAY THE DOLPHINS!!!

Favre: What the heck should I do without my helmet? Hope I look good for Tom Landry.

Brett is not just a girls name!!

So you think it is pretty funny to put super glue on the ball for my first snap as a rookie?
Trade me now!!!

“I sent you some pics, I sure hope this is not one of them.”

Maybe a Green and Yellow jersey would absorb less heat?

But I dont look good in green!!!

Holy cow!!! They didn’t have D Lineman this big in college!!

“This does not look good at all. Time to go where I can throw the ball!”

I think I am going to retire….nah…..well maybe….ok I will….no I want to play somewhere else….well one year may be enough there…. Retire?….I can keep playing…65 is the new 20

Man, How did I end up in Atlanta? I thought I was going to be playing for Championship team, like the Packers.

If you told me that my signature would be worth money in twenty years, I’d call you crazy!

I just want to say, Thank You so much for drafting me. You’re not going to regret it. I’ll make you proud, I’ll take you to the promised land. I can’t wait for my chance, I’ll be your quarterback for years to come, and you’ll get my all! I’m going to be a proud Falcon for life!

You did what? I’m going where?

Wait…. which hand should I be throwing with???

Should I just retire already?

Congrats to Jason R.! Your witty comment has scored you 8 packs of 2014-15 Upper Deck Football Cards! Thank you to everyone for participating and we look forward to seeing your captions again soon.