When Upper Deck first introduced the world to game-used jersey cards back in 1996 Upper Deck Football, collectors were floored. Shortly thereafter the game-used jersey cards were included in 1996-97 Upper Deck Hockey. Nowadays almost every release has some type of jersey card component to them and our Product Development team wanted to work on a way to make jersey cards unique again. One of the ways they did it was by creating puzzle cards for Black Diamond Hockey card releases.

Fans have enjoyed the chase of putting these sets within a set together and completing the puzzle. It was our hope that some fans would turn them into framed memorabilia pieces and that is exactly what Ken M. has done from Alvinston, Ontario. Ken shared this with us about the cool displays he has created with his Black Diamond game-used jersey puzzle cards:

“I started collecting cards when I was a kid in the ‘60’s and like all kids who collected back then, I’m really not sure what happened to them. I’ve had some lively discussions with my mother about that… Then I got back into the hobby again in the ‘90’s. I started chasing some of the 2011-12 NHL Black Diamond Dual Game-Used Jersey cards because I had seen them on the Facebook page and like the looks of them.

“I really started to chase them in 2012-13 because the colors looked great on them. I really liked how they were put together and made the team’s logo. I got most of the cards just trading on Facebook . There are lots of great collectors out there that will help you put together sets. I also got some off eBay and bought a few boxes. I started to matte and frame the cards because I wanted to display them somehow and not just have them sitting in a box. That way I could put them on the wall and look at them and enjoy them. 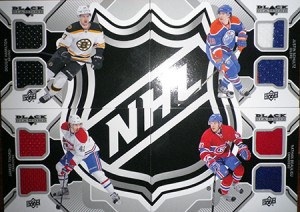 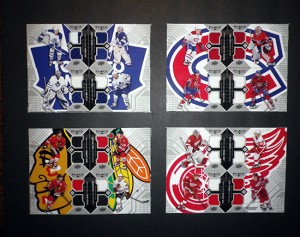 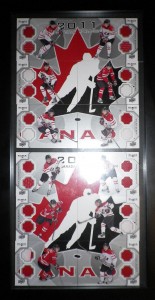 “Everyone who has seen them likes how unique they are when they are framed on my walls. One of my friends liked them so much he is collecting them now and I trading my doubles to him. These Black Diamond cards are not just another jersey card, they really can be memorabilia when you collect the entire set.” 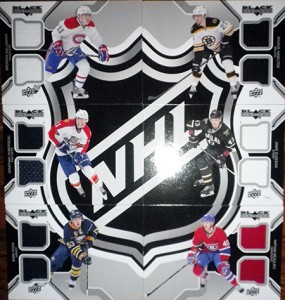 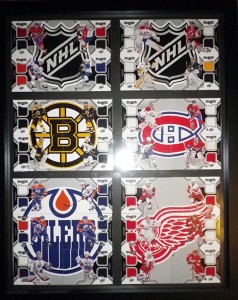 Ken is not alone in his passion for turning these cards into a form of wall art as we have talked with several other collectors who enjoy chasing these sets to have them framed. If you are one of those collectors, please show off what you’ve done on our Facebook page or include links in the comment section below! 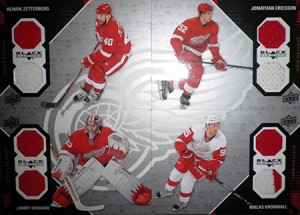 
I need the Jonathan Quick from last year to complete my 4 card Kings set and framing it is exactly what I want to do.


William, I am going to get Ken to make me a matte the minute I get the elusive Bill Ranford from 13/14 or the James Neal from 12/13. These puzzles card make up a big part of my personal collection.