What is it Like to Play in a Major Deck Building Game Championship for Marvel Legendary™?

Once a year, gamers instinctively flock to Indianapolis for GenCon which is truly a Mecca for tens of thousands who make the pilgrimage. Gamers gathered at the Upper Deck booth on a Friday morning to participate in the Marvel Legendary™ 10K National Championship Tournament with hopes of winning the grand prize and taking home the Iron Man trophy. 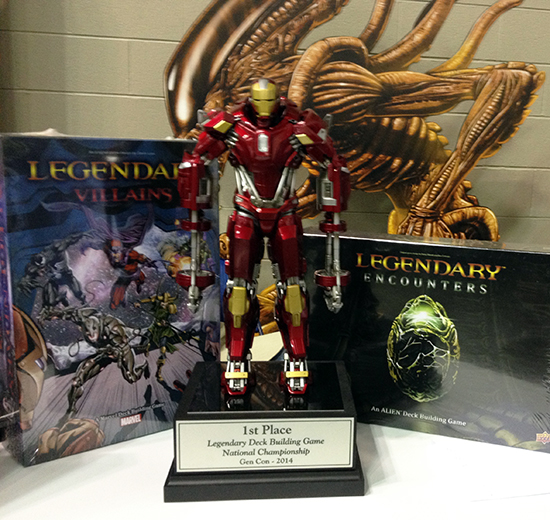 We were fortunate enough to have participant Calvin Patten document the entire event from start to finish and we wanted to share the experience with Legendary™ fans who may wonder what it is like to compete in such an event.

“I Woke up and started the day just like any other big event day. Planned ahead, knowing that the tournament starts at 10:00 am. After breakfast I made my way back to the room to get a little prep work with the Villains set. So many things to take into account for the tournament. I have had my share of bigger events. Last year I had the chance to play in both of the Gen Cons 5K tournaments. I was able to make the top 10 the first one and top 25 the second one. This event is a little different as it is only (1) event and it is for $10,000. While coming in the top 5 would be great, I was really just looking to have fun as that much prize money brought out some serious gamers.” 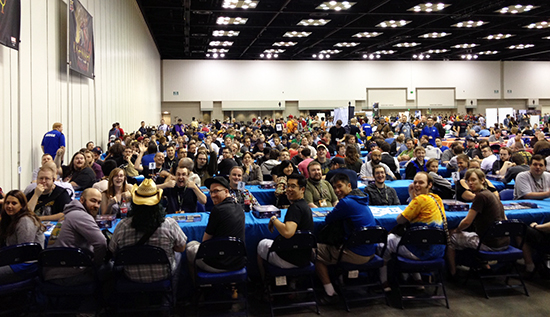 Round 1:
“After looking over the table, the breakdown that they went with for the entire 10K was the following…

“The pairings go up and everyone is split into tables of 5. I was at a table with four other guys that have not played the game a whole lot, but had played many other Deck Building Games (DBGs). I decided to try a different strategy for this round that I had experimented with at home. I decided to use my recruit points to buy the “New Recruits” cards which will allow you to keep your deck small and get anywhere from 3-7 attack a turn. Playing in a giant tournament it can only take 1-2 victory points to win. So if you are using 3-7 attack a turn it is very possible to get enough points to win the game before it runs out. After taking into account those strategies I was able to get first place in game one and earn five points. I was able to walk around a bit and see many of the same people that played in last year’s event, and see how they were doing. Most of them won the first round and will look to keep that momentum going into the next 6 rounds.”

Round 2:
“They kept the same set up and decided to keep it all day long. The strategy I used in game one seemed to work well but it was a little too close for comfort. I decided to use a different strategy this round and use the recruit points to get additional points to buy the “New Recruits” faster. Looking at the people that we got to us, Kingpin did assist in the recruitment and attack of those cards. We had five people at our table and after the dust settled the new strategy did not do me well. I was able to squeak out a thirdplace finish this round so I am sitting at seven points total. Not a bad start, but would have loved to be sitting at 10 points at this time.”

Round 3:
“This time I decided to go back to the original strategy and see if I could right this ship.  We did not even make it around the table four complete times and the game ended on turn 18. Good was able to clear the “Bindings” Stack quickly and we had the game over within eight minutes. I was not able to get out anything to kill so I ended this round in fifthplace for a total of zero points. Then we went to a showdown for third, fourth and fifth place, where each player still in it draws a new hand and then plays it out like normal, but you add the “Recruit Stars” and “Attack” on each card played. The play with the highest total gets next and so on. If there is another tie, then you showdown again with the remaining players. So after three rounds I am sitting at seven points still.

Round 4:
“Looking into this round I knew that it was only a matter of time that we would run into a table of 4 people. I was able to pull off a quick kill early on after drawing into the first position. That helped as the game only lasted 13 turns total. I was able to come in second that game with two VP. This was the second fastest game that I have seen or played this tournament. I was able to bring my total points up to 10. “ 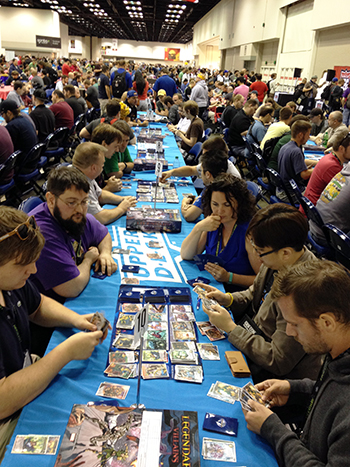 Round 5:
“This round did not start out well for me. I had horrible draws and I had to go last out of everyone. This is not a good place to be if you are fighting for your tournament life. On to round six as I got zero points for this round.”

Round 6:
“I needed to get in the top two every game from round five on to make the top 25. This game went quickly as the set up they used allowed the game to go very fast and not linger. I finally figured out that a five cost Juggernaut is very good when you are able to pull him off. I was able to win this round after going to a showdown and winning to bring home the final Dr. Strange Commander card.”

Round 7:
“The final round and the game lasted a total of 7 minutes. We hit every bad situation that we could and the bindings went away too quickly. We ended our game before most people made it around the table once. I came in fourthplace this time and overall it was not bad. “ 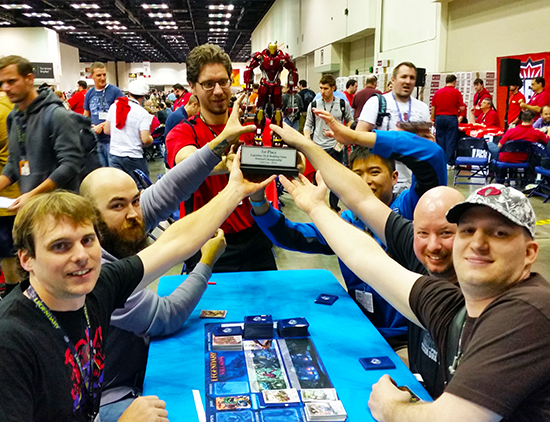 “Looking back on the last seven rounds it was a fun way to spend 10 hours. The event was run really well and it seems like players and Upper Deck are getting more comfortable with these events. The judge staff worked very hard this year and did everything they could to keep the event running smoothly. The tournament finally got the Top Five cut. I decided to stick around for the final five finish where savvy players who performed well in previous tournaments assembled to do battle once again.” 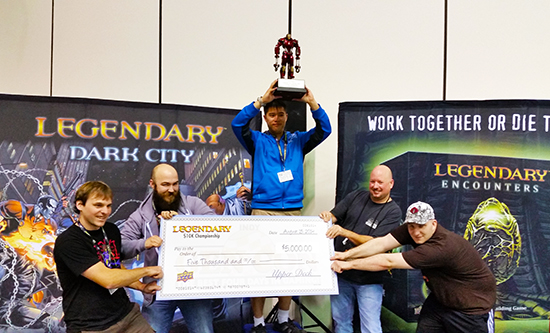 “The final table all decided to split the prize money so that each player walked away with $1800.00. The trophy was a very cool Iron Man trophy and did light up as well. Over all the event went very smoothly and everyone had a blast. Thanks to Upper Deck for a fun event and I look forward to taking part in it again next year. See you in Indy! “