We are thrilled to share an exclusive interview with one of Upper Deck’s top artists. Today we want to shine the spotlight on artist Joe Jusko. This iconic illustrator was the talent behind the famous Marvel Masterpieces trading card release from 1992 and Upper Deck is thrilled to share we have been able to secure Joe Jusko to resurrect the set. Recently we were able to sit down with Joe to talk about his artwork and what fans can expect from the new Marvel Masterpieces release. 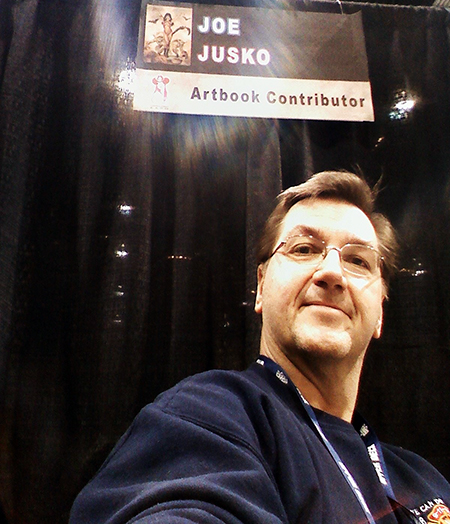 Joe Jusko will appear at the Upper Deck booth at the 2014 San Diego Comic Con! Come get a free autograph from Joe on Friday, Saturday and Sunday!

UD Blog: What inspired you to become an artist?
Joe Jusko: “As a little kid I would watch my older brother Danny draw. He was really talented and actually won a contest on the old Jon Gnagy ‘Learn To Draw’ TV show. Once I realized I also had a facility for drawing it became an obsession and how I spent every spare moment of my time. Comic books were always around the apartment and provided a direct channel for my creative instincts. I determined at the age of 6 or 7 that I would draw comics for a living! It was really one of those instances where the career chose me instead of the other way around. In hindsight it’s fascinating to me just how convinced I was of that being my calling, and how lucky I am to have fulfilled that dream!”

UD Blog: Who helped you along the way to become the artist you are today?
Joe Jusko: “I was fortunate having parents who never dissuaded me from art, but who actually encouraged my passion. I remember getting two of the Walter T. Foster art instruction books (The Nude and The Model, by Fritz Willis) at Christmas one year. How many parents would buy those for their 9-year-old? Henry Fiol, my grade school art teacher at St. Brigid’s was a constant source of encouragement, and several incredible teachers at NYC’s High School of Art & Design, including Richard Taylor and EC Comics legend Bernie Krigstein  put so much effort into helping me hone my skills. Howard Chaykin, who hired me as his assistant the summer after I graduated A&D helped me put the final polish on my portfolio, taught me many insightful tricks of the trade and opened doors for me at both Heavy Metal magazine and Marvel Comics that may have taken years to access, otherwise. Lastly, all the editors at Marvel (Jim Shooter, Tom DeFalco, Archie Goodwin, Louise Simonson, Larry Hama and Bob Budiansky) who saw promise in my work and who kept assigning me jobs at the beginning of my career, which gave me the experience to grow as an artist in a professional environment.”

UD Blog: Looking at the evolution of comic art from 20 years ago to today, what do you like and dislike about it?
Joe Jusko: “I love that the level of draftsmanship has gotten so refined, especially after that period of mediocrity in the late ‘90’s, but I do miss the quirky and stylized inaccuracy of the art I grew up on. I do think that the trend toward hyper realism in many instances has compromised some of the dynamics that first drew me to comics. It’s a nit-picky generational thing, though that makes me sound like a codger.”

UD Blog: What excites you about creating Marvel characters?
Joe Jusko: “I grew up on Marvel characters above all others and I’ve always had a lifelong affinity for them. They were drawn by all my favorite and most influential artists. I’m always excited to add my take on them to such a historic artistic pantheon. I know them better than any other company’s characters, as well, so my comfort level makes working with them a sincere pleasure.”

UD Blog: Who are your favorite characters to paint?
Joe Jusko: “I don’t know that I have a favorite. Just like my career path, I like bouncing around the characters. I especially like painting characters I’ve never worked on before as the challenge keeps my brain working. I do always look forward to the Silver Surfer, Black Cat, Hulk and Thor pieces, however. The bad guys are infinitely more interesting to me, as well. I can understand why actors prefer playing the villain over the hero much of the time. You can really have more fun with them.” 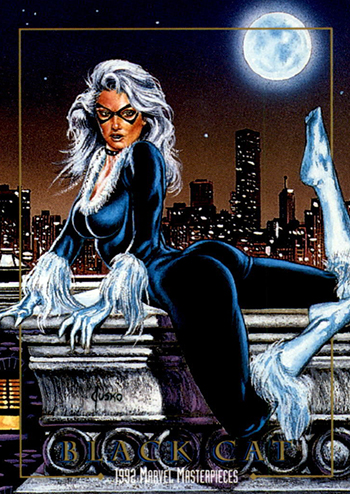 Art from Jusko’s 1992 Marvel Masterpieces set is beloved in the comic community. 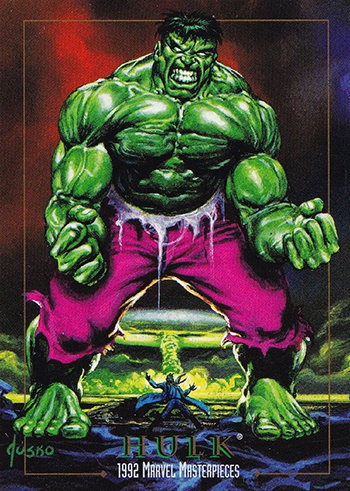 UD Blog: What do you remember about creating the 1992 Marvel Masterpieces trading card set?
Joe Jusko: “I remember the excitement over initially being offered the project! Up to that point it was the largest job I’d ever had. It was definitely a ‘right place/right time’ situation. I was painting a great majority of Marvel’s covers at the time and I guess I was the logical choice for their first painted cards set. Next I remember the absolutely grueling schedule. I worked night and day for 3 months straight. Even though they were small (6”x8.5”) pieces it was a remarkably short time. In hindsight I’m not sure how I did it. Mostly I remember the incredible response to the set upon its release. No one involved expected it. It just seemed like a really cool project that took on a life of its own and its popularity has truly stood the test of time. To this day at conventions I still sign more of those cards than anything else I’ve ever done.” 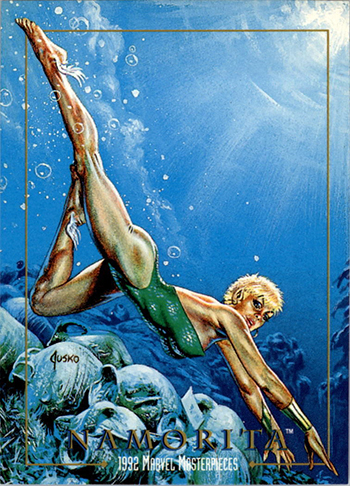 The level of detail in the 1992 Marvel Masterpieces set was unlike anything comic fans had ever seen in a trading card release. 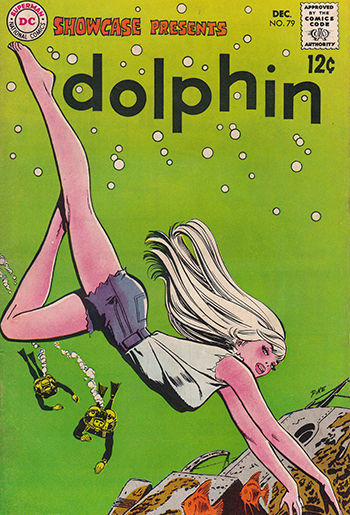 UD Blog: What is your favorite image from the 1992 Marvel Masterpieces set?
Joe Jusko: “Wow, that’s a tough one. I really liked the Hulk, White Queen and Black Cat cards, but I think my favorite is Namorita, as it’s an homage to Jay Scott Pike’s cover to the Dolphin story in Showcase #79. I loved that cover and story when I was a kid. It’s always been a dream to own the original, though I’ve never seen it for sale anywhere.”

UD Blog: What excites you about re-imagining that set with Upper Deck?
Joe Jusko: “The time factor has always been an issue for me with that first set. The images were painted very quickly and while they made cool cards they were not great paintings, and I had to compromise cool card ideas for simpler alternatives in my effort to get the job in on time. No one can tell where all the shortcuts are, but I sure can. Upper Deck is affording me the time to really spread my wings on these new pieces. I’m 20 years a better painter with a lot more time to produce the images. I’m enjoying every second of this!” 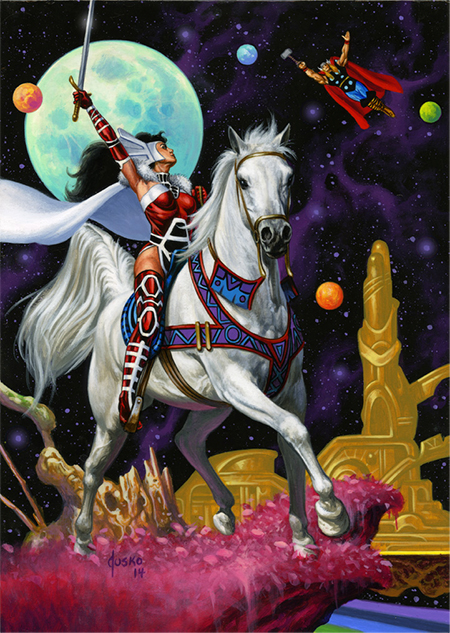 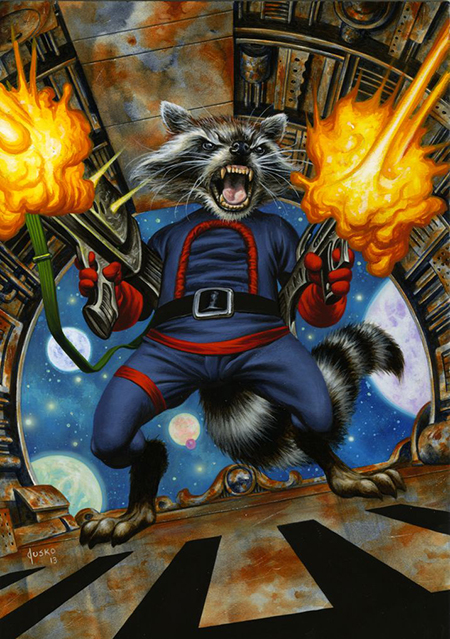 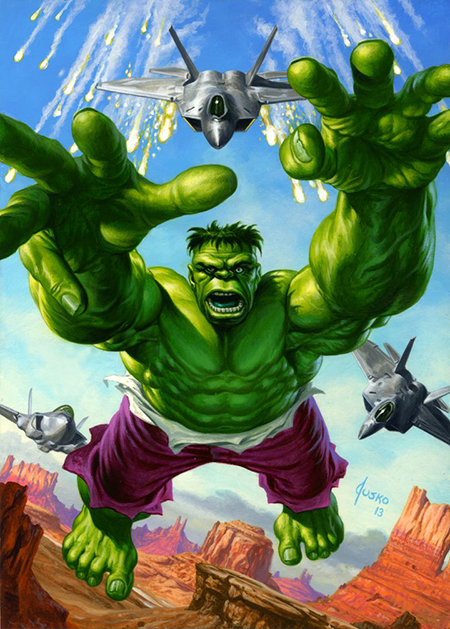 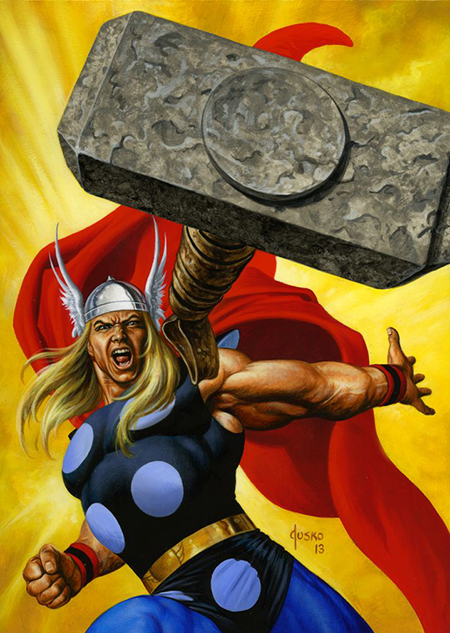 UD Blog: What card do you think fans will like the most from what you have created so far?
Joe Jusko: “The Captain America card! It’s a strong Cap image with a couple of special guest stars that don’t have their own cards in the set.” 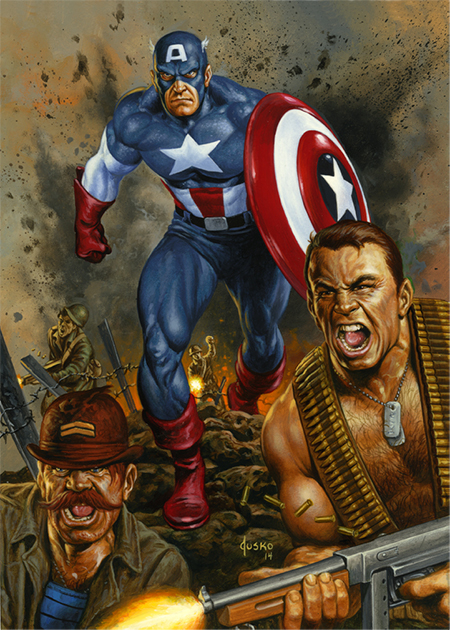 UD Blog: What is the process like creating the imagery for these cards?
Joe Jusko: “I’m producing fairly tight sketches for approval at both Upper Deck and Marvel/Disney. I do the sketches on tracing paper because once approval is granted I rub graphite on the reverse and trace it onto my board. Doing this way saves the surface from the damage of constantly erasing. I then tighten up the sketch as much as need and render the piece in acrylics.”

UD Blog: How do you come up with your ideas on how to show the characters for this set?
Joe Jusko: “As with the first set I’m trying to not rely on generic action poses. I think it’s important to imbue each card with a bit of the character’s personality or some reference to his/her history wherever possible. That’s not to say there aren’t some really cool pinup style action shots!”

UD Blog: What are some of your favorite things to create that aren’t Marvel, or even comic, related?
Joe Jusko: “I’m a huge fan of wildlife art, particularly big cats. Artists such as John Seerey-Lester, Simon Combes and Robert Bateman are major influences and I would love to spend a year or so just painting big cats.”

For more information on the artwork of Joe Jusko, please check out the following links:


Amazing artwork as always Joe! Looking forward to this upcoming set and the original is still my favorite set out of all the MM. That’s the one that got me into collecting so this is quite a way to come full circle.


The cards look great, can’t wait for this series to come out. What is the release date and when can we start pre ordering them?


Great detail! Simply amazing! Cant wait to see the rest of the set. I just dont like the hulk card (he looks like shrek), & im not really feeling the thor card either.


Can somebody please tell me when these cards will be released and available to buy!?!?


Outstanding quest there. What occurred after? Good luck!


Any updates on when this set will be released?