My Father: An Upper Deck Card Collector Through and Through

My father has collected Upper Deck products exclusively for well more than a decade. During that time he has assembled some of the most amazing sets the Company has ever produced. Most notably was his completion of the 2009-10 Exquisite Rookie Flashback set. He has a loyalty and appreciation for Upper Deck cards and as his son, it has been a lot of fun to learn about the hobby from him.

Recently my dad learned of a set of cards that Upper Deck produced exclusively for partners at the Las Vegas Industry Summit. The Summit is an event held annually that brings hobby shop owners together with the distributors, leagues, supply companies, card manufacturers and other key partners to look at ways to make the business better. While attendees receive a variety of gifts during the event, one of the most anticipated came from Upper Deck in the form of black boxes which contained 1 of 17 different autographed cards (some multi-signed) commemorating the 25th Anniversary of Upper Deck. Some of the sets highlights include autographs of Wayne Gretzky, Tiger Woods, LeBron James, Ken Griffey Jr. and Michael Jordan. The set also included several multi-signed cards with two cards limited to just three total copies in the Tiger Woods/Rory McIlroy dual autograph card and the amazing quad autograph card with autographs from Wayne Gretzky, Ken Griffey Jr., Michael Jordan and Tiger Woods. 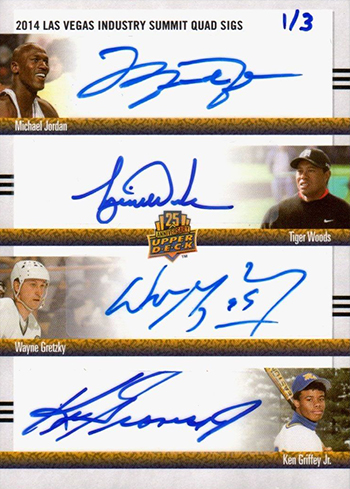 My dad thought it would be an incredible set to put together, but given how rare some of the cards were and how high in demand they would be, he felt like it would be an impossible, or at least, very expensive set to put together. As he talked about the set with some friends, one of his close buddies challenged him to try to complete it, and my father just loves a good challenge. So he began the hunt and like most stories of putting together a set, it started off pretty easily, but then things started to dry up and it got much more difficult. 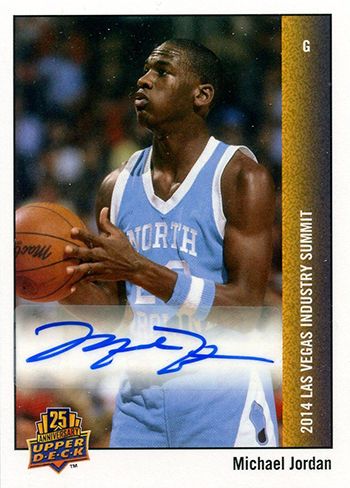 Limited-edition promotional sets can be some of the most difficult to put together.

The chase was all consuming and involved scouring message boards, eBay and contacting anyone he thought may have attended the Summit. He was able to acquire the cards through traditional methods of either paying for them, trading for them or a combination of the two. He was able to score the two super rare cards limited to just three copies, but it then became some of the single signed cards that were difficult to track down.

Finally it came down to just one missing card of boxing great Oscar De La Hoya to complete the set. At the height of his frustration, my father noticed that Upper Deck posted a Cinco de Mayo giveaway on the company’s blog and ironically enough, the prize was the missing De La Hoya card.

With the taste of completion in the air my father left work and raced to the local costume shop where he got a traditional Mexican bandito costume. All he needed now was to pair the costume with an Upper Deck card featuring a Hispanic athlete, take a photograph and hope for the best. As luck would have it, my father won the contest and his set was complete. 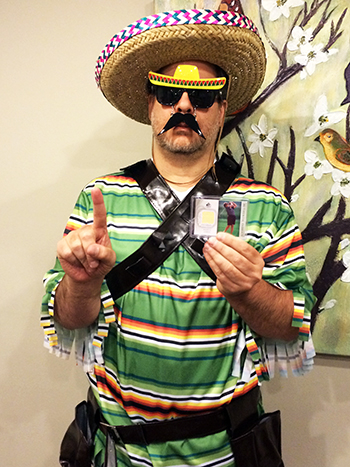 I guess the hardest part about starting a set is making the decision to chase it and getting that first card to signal the chase is underway. I am very proud of my father for the tenacity he shows in going after sets he wants. He has always shown me, either through card collecting or in his business endeavors, that if you want to accomplish something, you need to do is set a goal, make a plan and go for it. And when unexpected situations come along (like having to dress up to get the last card you need to complete your set), roll with the punches and give it your all. I’ll always think about the lengths my dad went to in order to put together this set and it is hard to think about it without a big smile. 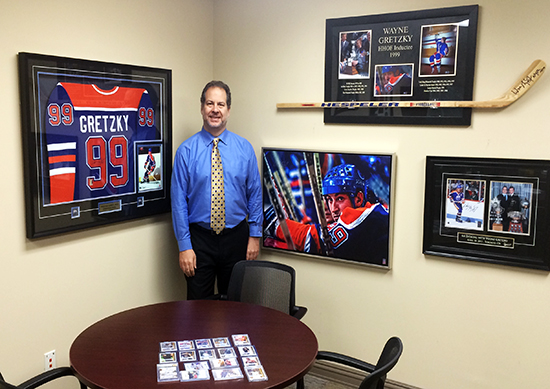 
Awesome! Congratulations on the set!