Upper Deck Gives Back to Victims of the Carlsbad Fires

On May 14, 2014, North San Diego was stuck by a series of wildfires and when our executive staff came through our offices indicating we had to leave, I just didn’t believe there was really a problem. Upper Deck’s corporate headquarters are located in a very dense business district adjacent to the Palomar Airport so the thought of a wildfire affecting us just didn’t seem like a possibility, until I looked outside and saw this. 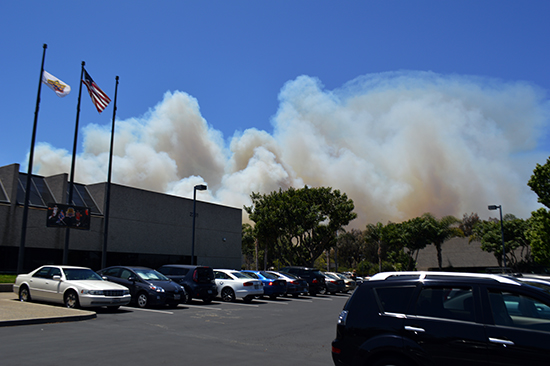 Thankfully no Upper Deck employees experienced a loss from the fire, but the community was definitely affected. I was shocked on my slow commute home to actually see homes burning. When our offices re-opened, I made my normal commute to work and became even more shocked by how devastating these fires were to Carlsbad. What really blew me away however was how close the fires came to homes, business and parks only to be thwarted by brave firefighters. 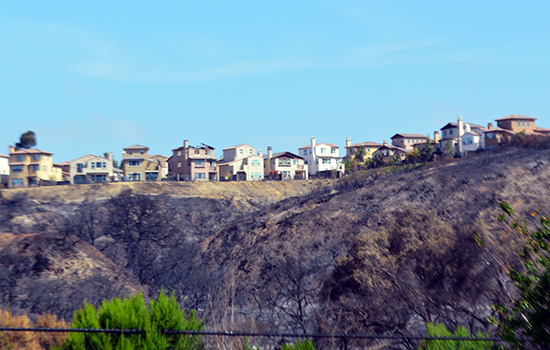 Fires in the Carlsbad area came incredibly close to destroying homes and other structures, but almost all of them were saved. 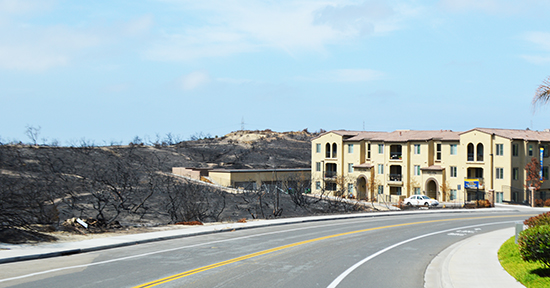 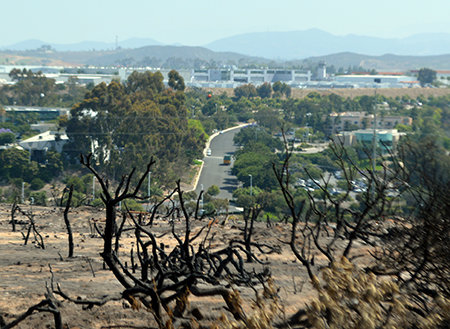 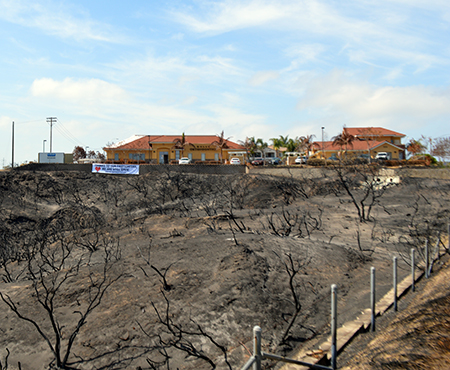 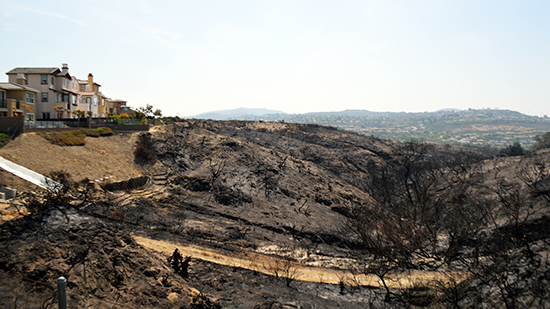 The community came together and throughout the area signs like these became commonplace. 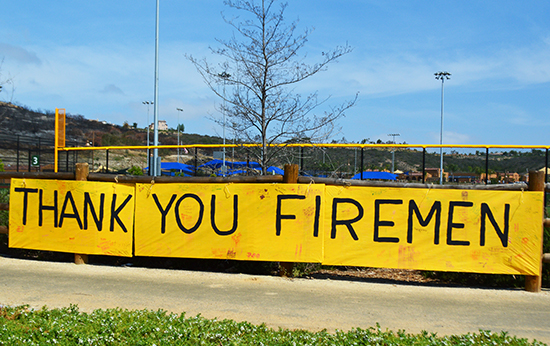 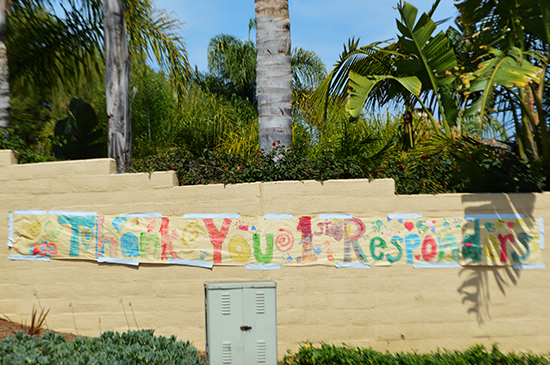 Not everyone was that lucky however. We first heard about the Gilmore family in a Union Tribune story and were saddened to hear not only were they collectors, but they were collectors who lost everything in the fire. While many in their community were saved, the Gilmore’s home was lost and the staff at Upper Deck felt inclined to help them start the rebuilding process. 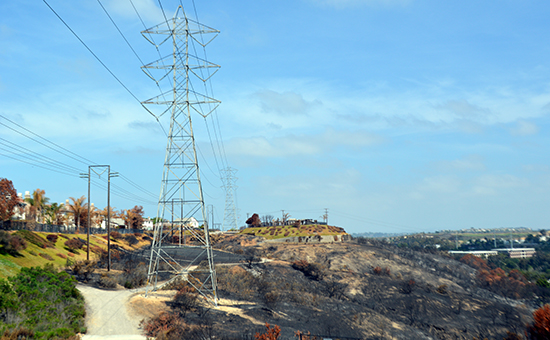 From afar, the Gilmore home almost looks like it is still in tact as there is actually still some greenery around it, located to the right of the power lines. 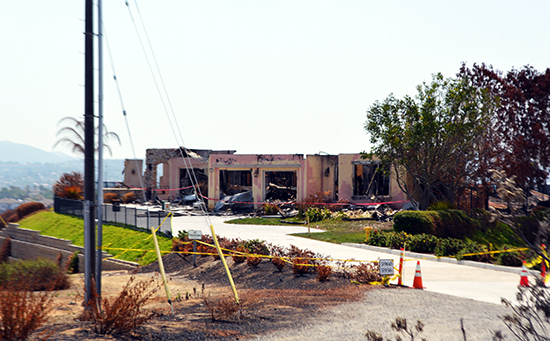 On closer inspection however, you can see that the Gilmore’s home is now totally gone.

As Upper Deck celebrates the company’s 25th Anniversary this year, we started a new program to give back to collectors and fans to thank them for their support over the years. Upper Deck’s Random Acts of Kindness program has been a big success thus far, but after this tragedy, we felt the Gilmore’s were the perfect family deserving of a special package of goodies they could enjoy together. Quite simply we wanted to help them start to rebuild what they had lost. We worked to get in touch with them and paid them a visit at the hotel they were staying at last night.

Jeff Gilmore and his two sons, Adam and Andrew, met me in the lobby and I was immediately taken back by how positive they were in the face of so much adversity. They shared how quickly the fire had engulfed their property and how they had just minutes to escape. Jeff left his wallet on the couch, worrying about getting his family out safely. Now his wallet and most everything else they had to leave behind were gone. They sifted through the rubble days later, but practically everything they had was simply that; rubble.

Jeff shared he loved golf and baseball while Adam was a football fan and Andrew loved non-sports products like Upper Deck’s Marvel trading cards sets and games. Luckily we brought tons of boxes and packs we knew they would enjoy opening along with a variety of other promotional items and signed memorabilia. They were all smiles when they received authentic autographed blow-up cards from athletes like Ken Griffey Jr., Natalie Gulbis and Keenan Allen. 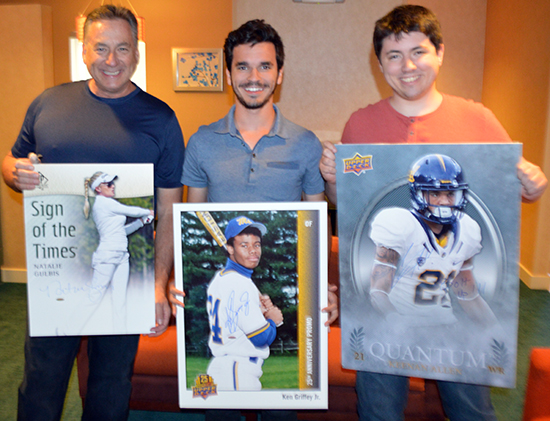 We surprised the family with some autograph blow-up cards of some big-name athletes!

After sharing over a dozen boxes, limited-edition autograph cards, and signed memorabilia we knew they would enjoy, I shared some packs I knew could help take their minds off things for at least a little bit. First up was a pack each of Upper Deck’s Ultimate Collection Football which retails for $100 per pack. The guys were really amazed by the quality of the cards and the very unique autographed booklet cards. 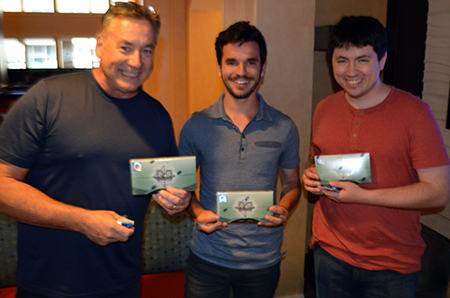 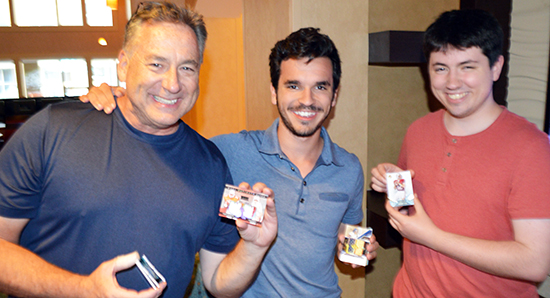 Then came the new SP Game-Used Golf and Jeff joked with his boys, “Alright, you guys can open them, but just make sure all the cards make their way back to me.” They all laughed and their smiles continued as they discovered a variety of cool tournament-worn memorabilia and autograph cards. 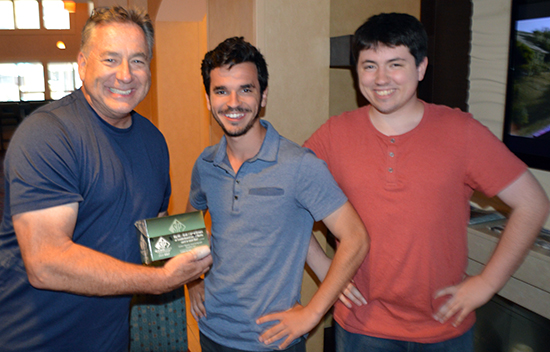 I asked them to sit down from there as I shared a pack of the new Upper Deck Quantum Football which retails for over $200 a pack. The Gilmore boys was blown away. Jeff said, “I get worried when these guys spend a couple bucks on packs and now we are going to open this?” The pack was awesome with the highlight being an E.J. Manuel autograph card limited to just three total copies; a very rare find indeed. 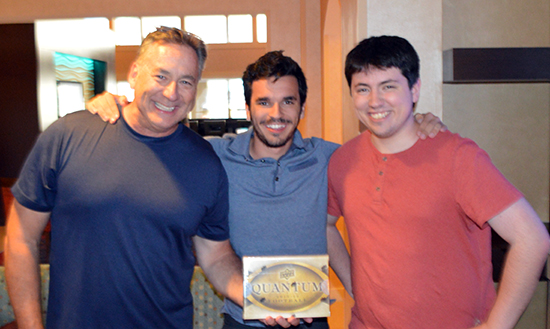 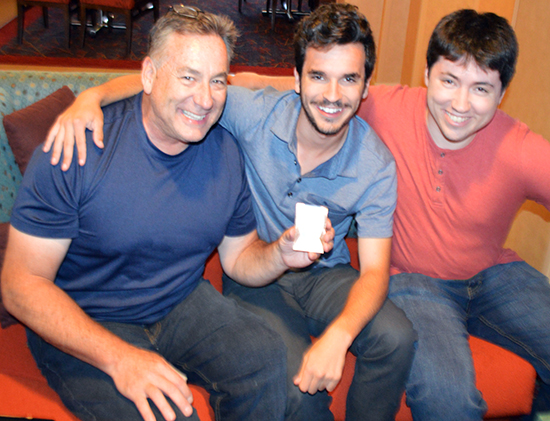 When I saw the picture of them holding this prized card I was a little disappointed there was a glare to it that made the card image not show up. As I looked at it further though my disappointment turned to happiness as I saw their smiles and remembered how much fun we had together during my visit. Today was about rebuilding. It was about coming together as a family and making some new memories. And it was about giving back through a simple gesture of kindness.

More than that though, I believe in their simplest form, trading cards and collectibles provide people with a distraction and an escape from all the craziness life can throw your way. Collecting is a very wholesome hobby that you can get lost in for a little while. And today, that is exactly what the Gilmore family needed.


Priceless to bring back joy into Jeff Gilmore and his two sons, Adam and Andrew after such tragedy. Thank you upperdeck for such humanitary works


Way to go! Super all the way around and grateful that none of the UD employees lost their homes.