Brag Photo: The Los Angeles Kings Square Off Against the Anaheim Ducks on a New Upper Deck Card

As many hockey fans know, beginning with the 2014-15 NHL® season, Upper Deck will become the exclusive trading card partner with the NHL®. One of the key elements of that deal was the belief the category needs to create more retail and kid-friendly products at lower price points. Starting off the year for Upper Deck will be 2014-15 NHL® Upper Deck MVP and while it may have a 99 cent version available, there are some very cool inserts to be found in packs that will excite every level of collector.

That being said, it is interesting that one of the cards Upper Deck mocked up to show off to fans what the set would look like actually has a tie to the current NHL® Stanley Cup Playoffs. The 2-on-2 jersey cards found in the product will feature four total swatches of game-used jersey material embedded in the card. On one side will be two star players from one team and on the other side will be two star players from a rival team. On the eve of the beginning of the series between the Los Angeles Kings and the Anaheim Ducks, we thought fans would like to take a look at this card. 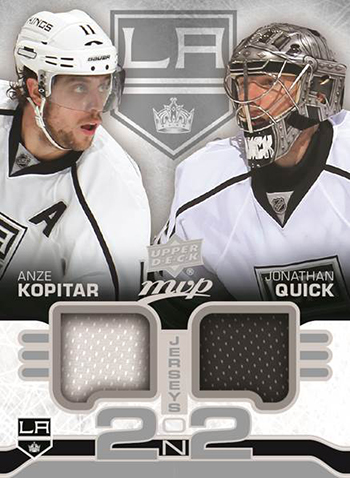 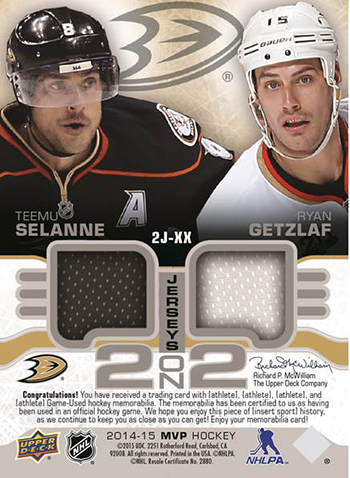 Which side of this card are you cheering for?


Have to cheer for Teemu on this card but hoping Habs win the cup.