Upper Deck Helps Kids Shut Out of the Heritage Classic

Mistakes happen. That’s just part of life. Even at Upper Deck, we’re not above saying that we make mistakes sometimes; have you ever heard of an “error card” for example? When Upper Deck heard about a computer error promising Heritage Classic tickets to kids who were then told they could not go to the game, we wanted to do something to help. The Vancouver Canucks were great about working with the youth hockey organizations to provide all the kids with tickets to future games, access to a practice and other items for the mistake, but we were hopeful we could get some of the kids to the actual game.

When we reached out to the Canucks about ways we could help and they were very helpful and immediately put us in touch with a listing of youth hockey teams affected. We reached out to the Surrey Bantam Lightning and they were thrilled to hear from us. We donated to the team four of our Heritage Classic tickets along with hospitality like access to a special NHL brunch prior to the game and a hospitality suite during the game. 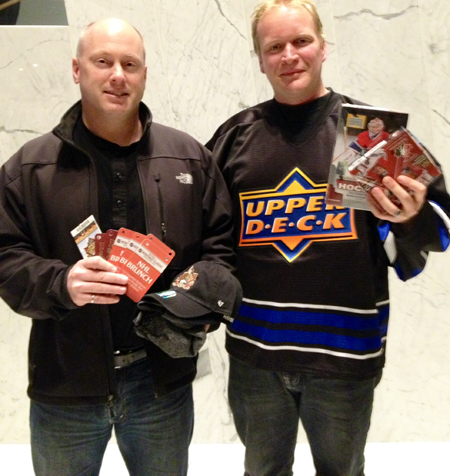 When Kevin Scott picked up the tickets from us, he shared that so many people had reached out to donate tickets to the teams that he was hopeful every kid on the team would get to go to the Heritage Classic. Pepsi Canada in particular stepped up for them big! Never underestimate the kindness of strangers. Upper Deck was thrilled to play a small role in helping get some of these kids to the game. Here’s what Kevin shared afterwards:

“Thanks so much to Upper Deck for the tickets to the Heritage Classic. The kids had a great time at the awesome NHL brunch where they ate delicious food and got to touch the Stanley Cup. The game was a spectacular event and the hospitality suite was an amazing treat. The entire day was such a special experience and we can’t thank you enough. Thanks also for the Heritage Classic swag, the hats and the NHL cards were so very cool. We appreciated the generosity and thoughtfulness of you and your company! It was the coolest Canuck game ever!” 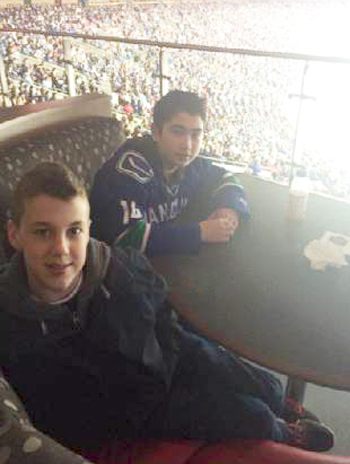 Two of the boys enjoying the Heritage Classic from the special hospitality suite Upper Deck got them tickets for!


4 tickets for a whole team? Good job upper deck…it looks like only 2 kids and their dad’s made it to the game…..


Thanks Upper Deck! Because of the 4 tickets plus the 20 from Pepsi the entire team plus coaches were able to go to the game, the coaches wouldve just been drivers and left outside if we didn’t have the extra ones from you. It was an amazing gesture and we can’t thank you enough!