Every year at the annual Industry Summit, Upper Deck enjoys the opportunity to spend time with hobby shop owners who are looking to improve their businesses. Those in attendance represent some of the most motivated small business owners in the United States and Canada who come not only to learn, but to share. For helping Upper Deck to reach 25 years in business, we worked hard to make the event memorable for everyone in attendance. 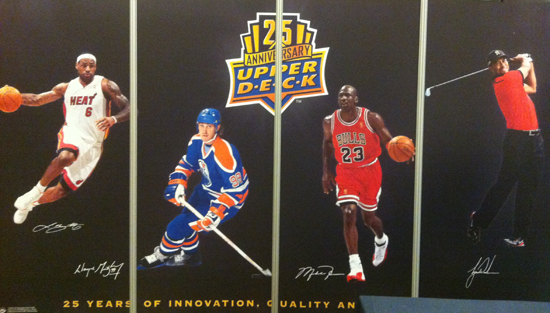 By the end of the event, this wall was covered in messages from dealers congratulating Upper Deck on 25 years in the business.

UD’s booth was at the center of the room and had tons of items to check out.

One of the most talked about items on display was Upper Deck’s new Black Diamond Hockey Rookie Gems Quad Diamond cards. There are four 1 carat diamonds in every card! 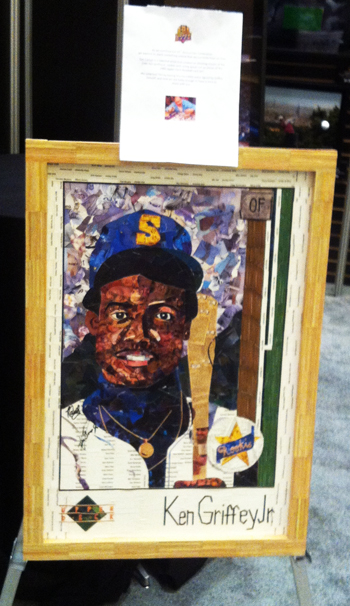 Upper Deck started the show by having shop owners share their well wishes and favorite moments from the last 25 years in the industry on a special memory wall featuring the company’s top spokesmen. Upper Deck also shared special 25th Anniversary shirts with attendees which were a huge hit. And the Upper Deck booth was something to see as the company had a huge area at the front of the room where we showed off a variety of awesome Upper Deck Authenticated memorabilia, super-premium trading cards and an amazing mosaic from artist Tim Carroll featuring Ken Griffey Jr. that UD recently had Junior autograph during a signing session & media tour. 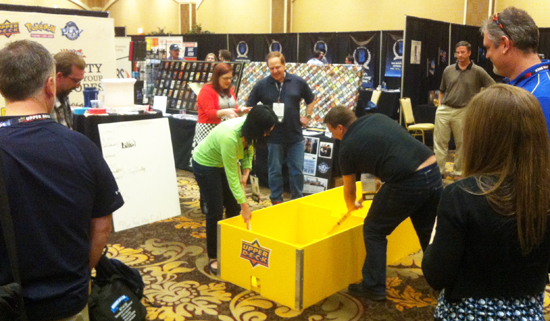 Additionally, Magazine Exchange kicked off a very fun and co-branded box hockey game at their booth that created some big crowds to see what all the commotion was about. 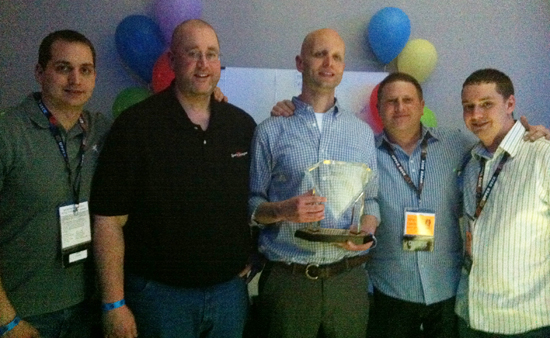 The team from Sports Images led by Matt Lane shows off their award from retailers celebrating 25 years of industry excellence. Upper Deck and Ultra Pro received similar awards that evening. 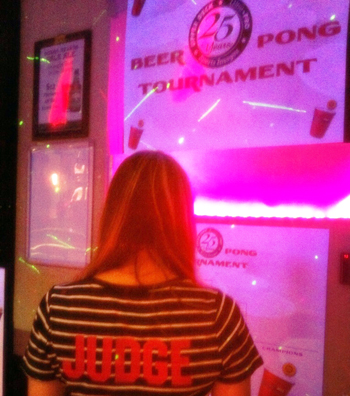 Dealers had a lot of fun taking part in the industry’s first-ever beer pong tournament.

That evening was a special welcome reception for attendees celebrating the 25th anniversary of not only Upper Deck, but also for one of the industry’s top distributors, Sports Images and the beloved supply company Ultra-Pro. Hobby shop owners surprised all three companies by awarding them with special trophies as thanks for all their help over the years. It was a fun-filled evening with great food, live music, cool promos and even beer pong. 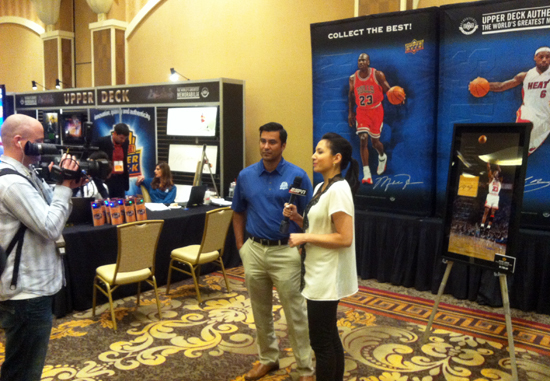 ESPN’s Mint Condition filmed three segments with Upper Deck including this piece about Michael Jordan vs. LeBron James in the world of collectibles.

On Monday shops were busy attending meetings and panels. Upon completing the Meet the Manufacturer portion of the event, many attendees were gifted with a special 5-card 25th Anniversary promo set from Upper Deck. Once the show floor opened however, the Upper Deck booth was the prime meeting point for attendees and ESPN’s Mint Condition stopped in to film three segments for the popular hobby show. 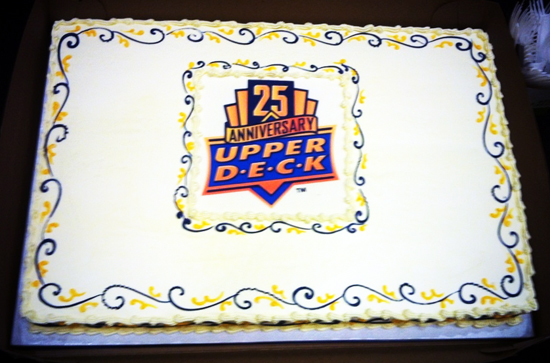 A cake 25 years in the making!

Upper Deck brought in a HUGE anniversary cake to share with all the attendees to thank them for making the last 25 years so sweet! It was delicious!

Later in the evening, Upper Deck was a special guest at a dinner hosted by Universal Distribution. Dozens of hobby shops were in attendance and it was really special to share ideas in a laid back setting for upcoming hockey releases in particular.

rised all three companies by awarding them with special trophies as thanks for all their help over the years. It was a fun-filled evening with great food, live music, cool promos and even beer pong.

Tuesday was a big day for Upper Deck where the company co-hosted a lunch with the NHL® and the NHLPA. It was a fun session for shops to learn about some of the top future prospects in the league. Then came the Upper Deck corporate address where Upper Deck’s president, Jason Masherah, addressed the Certified Diamond Dealers in attendance sharing one key point, “Upper Deck is the only company that only sells hobby product to hobby shops.” Then it was on to Grant Sandground who shared some exciting new products with attendees like Upper Deck SEC Football and the All-Time Greats Master Collection. More details to come on both of those stellar products. I enjoyed providing a little comic relief during the event sharing some fun prizes as we talked about the innovation Upper Deck brought to the market over the years. We finished the address by awarding Ken Richardson of Pastime Sports & Games with the annual Steve James award. 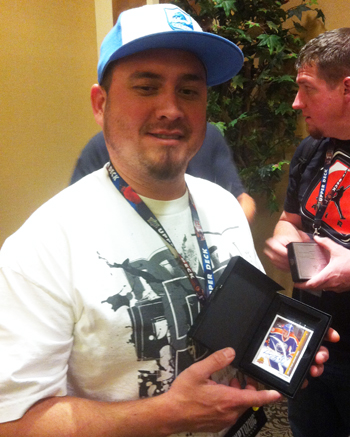 What a thrill pulling a UD Wayne Gretzky autograph from the LVIS 25th Anniversary packs! 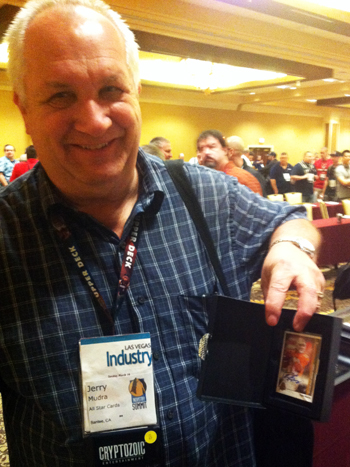 Pulling an autograph card of Peyton Manning had this shop owner wearing a big smile! 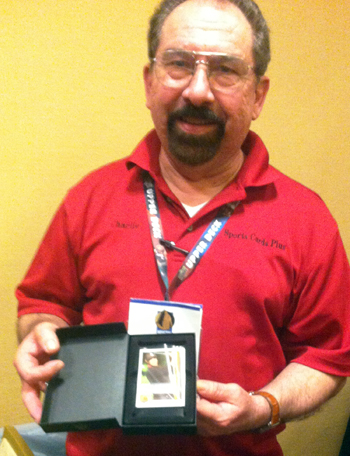 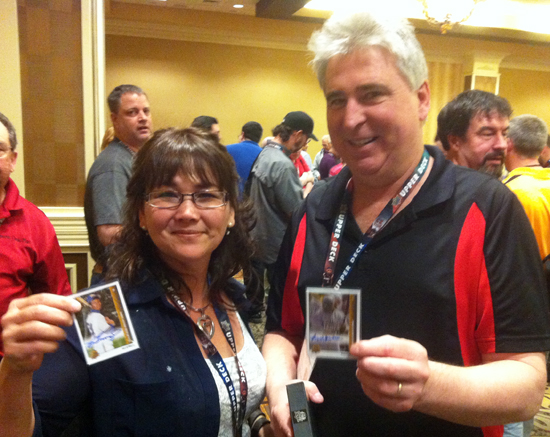 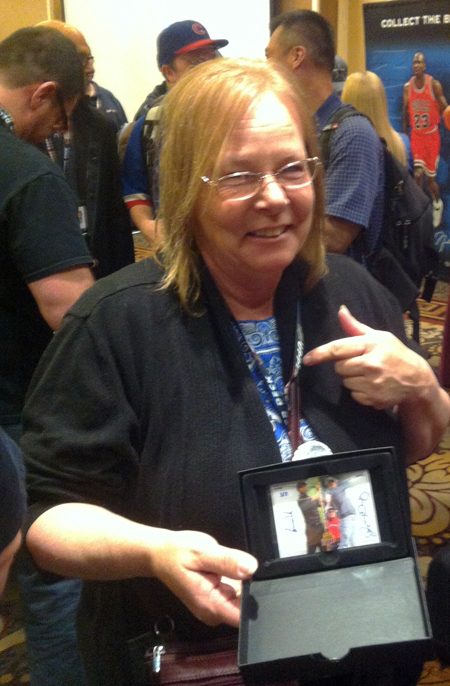 This dealer was in disbelief after pulling a dual autograph of Tiger Woods and Rory McIlroy. 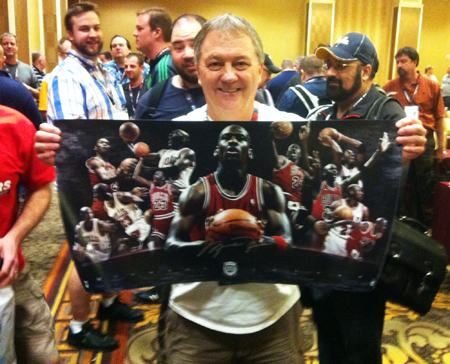 There were also awesome instant redemptions for signed UDA memorabilia. Dean got the top prize with this amazing Michael Jordan signed collage.

The moment that had everyone buzzing however was at the end of the event where we awarded attendees with special Las Vegas Industry Summit packs. With an autograph in every pack from sports superstars along with five instant redemption cards good for Upper Deck Authenticated memorabilia. Check out the checklist for the set! n did a bit of a putting clinic with some lucky shop owners. And we also held the expired redemption raffle that afternoon where again, everyone who participated in the promotion, won a prize with them all being shipped out this week and next. 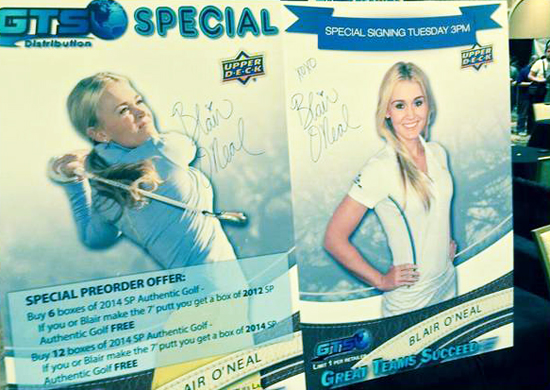 Upper Deck partnered with GTS to bring in Blair O’Neal to the show to sign autographs and spend time with dealers, she was great! 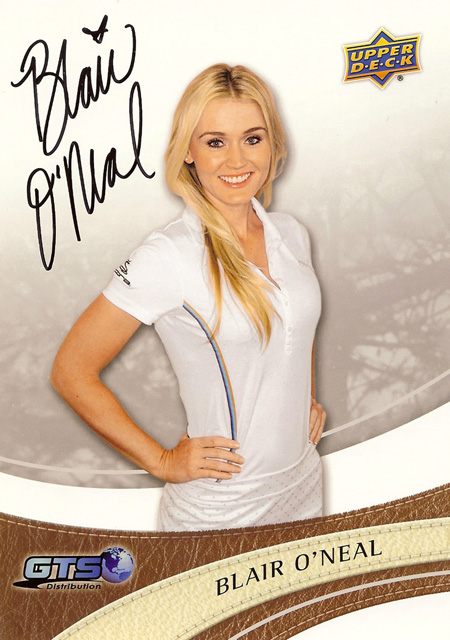 Lucky attendees walked away with one of these signed blow-up cards from Blair O’Neal.

Later on that afternoon Upper Deck partnered with GTS Distribution to bring an amazing young professional golfer, Blair O’Neal, to the show for autographs and photos.  Attendees thoroughly enjoyed her appearance and she even did a bit of a putting clinic with some lucky shop owners. And we also held the expired redemption raffle that afternoon where again, everyone who participated in the promotion, won a prize with them all being shipped out this week and next.

Wednesday was the close of the show, but there was still plenty going on as Upper Deck’s Mike Phillips helped moderate a panel on distribution. That afternoon Mike and I made ourselves available for a Q&A Session where we brainstormed some new ideas with shop owners.

All in all it was an amazing event that anyone who owns a hobby shop should be a part of. Our main goal was to help, educate and thank those shops who have served Upper Deck on the front lines throughout our 25-year history. The main thing collectors seem to be talking about however are the special Las Vegas Industry Summit 25th Anniversary packs we created. Yes, they are pretty cool, but we created them exclusively for hobby shops in attendance at the event. But here’s the thing, we couldn’t have made it 25 years without collectors as well, so we went ahead a produced a few extra packs to use with you for promotional purposes. 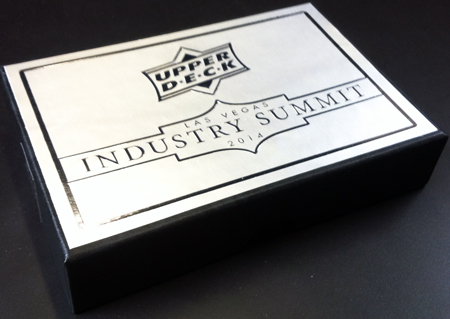 You can score one of these amazing 2014 Upper Deck Las Vegas Industry Summit 25th Anniversary packs just by doing something nice to help hobby shops!

If you are looking for a pack experience like no other, here is your chance to get one for FREE! What would you do for a 2014 Upper Deck Las Vegas Industry Summit 25th Anniversary pack? Since the show was all about helping the hobby shop, we want to see what you can do to help these small businesses be successful. We are challenging you this week to help a hobby shop somehow and share with us what you did by emailing us at UpperDeckMarketing@upperdeck.com.

Help us make the hobby better by giving some of your time to help a local shop. And if you don’t have a local card shop, maybe you can do something for an Upper Deck Authorized Internet Retailer or Authorized Group Breaker you enjoy purchasing Upper Deck products through. Or maybe you have a great idea for a hobby shop program to help this category of trade? Email us that information and we will go from there. We are looking for some of the best, most creative forms of assistance to hobby shops and if we like what we see, you may just end up with one of these special packs. So what are you waiting for? Let’s help some shops!

Promotion details – You have until Monday morning at 8:00a.m., March 31 to accomplish your goodwill gesture to a hobby shop and report back to us at UpperDeckMarketing@upperdeck.com. Please make sure to include the name, address and contact you worked with at the shop to make it happen. Images and videos showing your goodwill gesture would be helpful for our decision making process. Up to five 2014 Upper Deck Las Vegas Industry Summit 25th Anniversary packs may be awarded and should we receive a significant amount of messages we will also award runner-up gifts of 25th Anniversary promo sets.


I will always buy wax from my LCS and never NEVER from Walmart, Target etc. When I buy cased it is from an Upper Deck dealer like Pittsburg Cards, Big T, Blowout Cards and my favorite dealer down in road in Glasgow Ky. Chris Edmonds. A case of Upper Deck always has the one hit that makes you glad you bought a case.


I am a baseball fanatic living in Canada. There is one card shop near me (40 miles away) and they do not carry any baseball cards at all so I rely solely on online stores and breakers in the US which puts me at the mercy of very expensive shipping costs and exchange rates.

I deal with 5 different online stores and breakers on a regular basis and have had absolutely no issues or bad dealings with, a couple of which was at your recent summit.
I wish there was a way to get more baseball product up here (especially currents products) but this is hockey country and I am the one who is geographically mislocated.

I wish there was something I could add to what needs improving but from all that I have seen and read and a personal experience with your company but there is not.

I would like to say though, of all the card companies out there vying for attention and precious sales. Upper Deck has the best customer service to not only it’s distributors and wholesales but all to the buying public. That is a rare commodity. Thank you for remembering who it is that made you who you are today.