It’s Throwback Thursday so let’s go back through Upper Deck’s trading card history and come up with a fun giveaway. This week Upper Deck was at both the NHL® Stadium Series games at Yankee Stadium where the New York Rangers were able to score victories in both games. Upper Deck was on hand to giveaway cards, showcase new releases and allow fans the opportunity to make their very own Upper Deck trading cards. So let’s go way back to 1991 for this checklist card from Upper Deck Hockey featuring three Rangers rookies (Weight, Rice & Amonte) enjoying a little time at the beach. Please share your comical caption to this card for your opportunity to score a FREE pack of 2013-14 NHL® SP Game-Used! 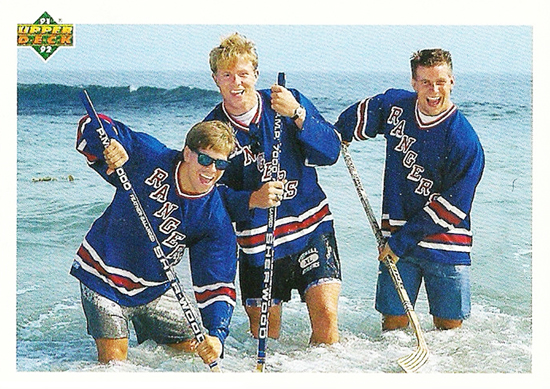 Thanks fans for all the submissions. Our team had a lot of laughs reading through these. Ultimately we worked down to our top two choices:

Another favorite that was received after the time table for the promotion was:

As you can sea, we are trying to shore up the defense, with a wave of offense. – Troy Collins

Thanks again to everyone for participating!


Hockey on the beach….nothing can be more AWESOME!!!


We are pretending to have fun at this ridiculous photo shoot!


When they went on the rookie boating trip, they kinda forgot something.


let’s face it…we’re not as cool as the Islanders, but maybe splashing around in the water will help us look better!


Little did the fans know this was shot on the backlot of Universal Studios.


Hey guys, is that Pamela Anderson?? Try to look cool


With Sunbelt expansion coming, the NHL sent three players to show local residents what hockey was all about. Sadly, this was the closest thing to ice they found.


Melting away the competition!


Over the beach,off the FDR, nothin but net…
😉


Since we already conquered the Stadium Series… We are ready for the Ocean Series. Rangers vs Sharks!!!


It seems a little warm at the rink today, I don’t think the ice is going to hold up.


“Hey guys, I dont think this is what they meant by hook the fish”


Young Guns have fun in the sun!


“So is it still called icing?”


these twigs are not good for surfin at all!!!


“who’s idea was it to bring the cup to the beach?” “These sticks just aren’t helping us find it” “Maybe we can make a sand Cup and no one will notice”


We’re so hot, even the ice melts


“You want us to pose where Upper DEck? who do you think we are?”
“The new Beach Boys”


“Sharks? We ain’t afraid of no Sharks … Especially from San Jose.”


Suns out funs out!


Hey guys I think the the ice is melting


Have the winners been decided yet?


Its way cheaper if we catch supper than pay for the rookie dinner!!!


As you can sea, we are trying to shore up the defense, with a wave of offense.


Splish splash, there were Ranger in the bath. All along a Saturday night!


The first outdoor playoff game had to be called due to the surf.


Thanks very much to Upper Deck, and Chris Carlin for choosing me for a prize. Very much appreciated, guy! Troy


Thanks for picking me! Cant wait to rip into some more hockey! That, along with snow & cold, are things that are impossible to find down here in South Florida. #GoCatsGo #YoungGuns