Upper Deck Invites You to Get Out and Visit Some Hobby Shops on College Colors Day! 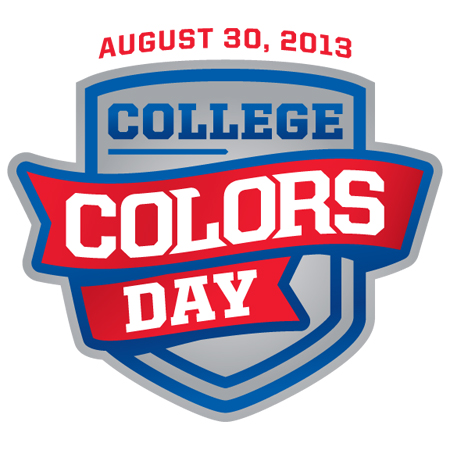 Upper Deck is providing participating shops with 30-50 prizes each ranging from autograph cards, memorabilia cards, blow-up autograph cards, blaster boxes, uncut sheets and more! Additionally, the grand prize winner will get a personalized Upper Deck card for their school. That’s right, the winner will provide Upper Deck an image of them supporting their team and we will produce 60 Upper Deck CLC trading cards for them. 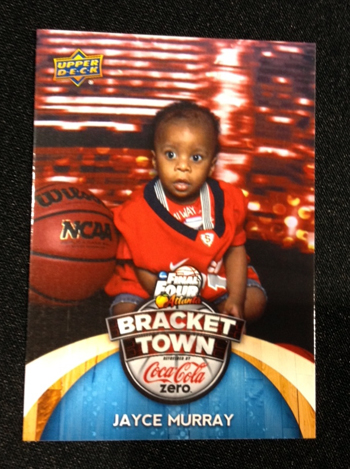 One grand prize winner from each shop will get the opportunity to have their very own Upper Deck collegiate card produced just like this future all-star did during a recent trade show!

All you need to do for you opportunity to score one of these awesome prizes is visit one of the participating shops dressed in the school specific attire for that store and purchase one pack of the Upper Deck product for that area and you will receive one raffle ticket (maximum of one raffle ticket per person). The raffles will all be held Friday evening towards the end of the day for the promotion (inquire with each shop for exact times). Below is a list of participating dealers:

But what about those fans who don’t live nearby these shops? Or fans who don’t support those teams? Well Upper Deck has you covered and will be running some promotions on Friday, August 30 to celebrate College Colors Day for those collectors as well. All you need to do is take an action photograph of you in your college gear with a matching Upper Deck collegiate sports trading card product from any sport. This is a skills-based giveaway where we will select the top three images we receive for three great prizes:

Top 2 images will get a personalized Upper Deck card for their school. You will be able to submit a secondary image of you paying tribute to your favorite school and we will make that into an actual Upper Deck trading card. Each of these collectors will receive 60 copies of the card. The third best image will receive a FREE box of 2013 SPx Football to celebrate the start of the college football season.

To submit your photos you can email them as a jpeg attachment to UpperDeckMarketing@upperdeck.com using the subject “2013 UD College Colors Day Promotion,” or you can post to Upper Deck’s Timeline on our Facebook page or get it to us via Twitter using @UpperDeckSports and @collegecolors. You can submit up to three photos as long as each image submitted has a different UD collegiate card featured in it. Submissions will only be valid for receipt on Friday, August 30, 2013 and we will announce customers selected to receive these items on Tuesday, September 3, 2013.

What we are not looking for is the standard picture of a fan holding up an Upper Deck card. We want to see some creativity, enthusiasm and excitement. It also needs to be appropriate. Take a look at these three photos we shot this afternoon of yours truly in my USC gear posing with different Upper Deck USC cards for an idea of what we would like to see tomorrow! 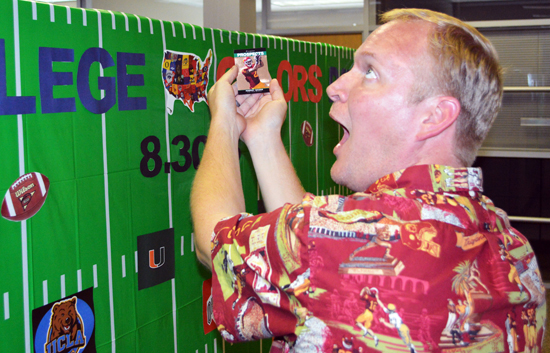 The Over The Shoulder Grab 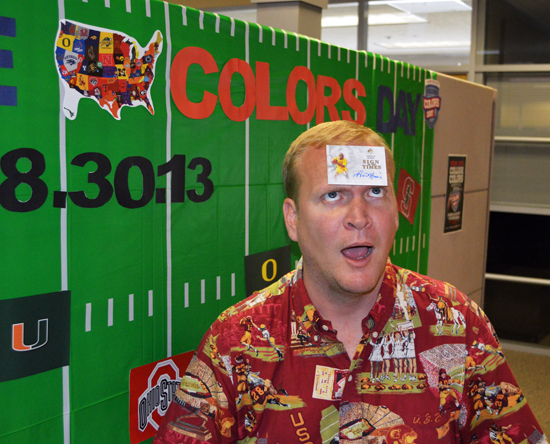 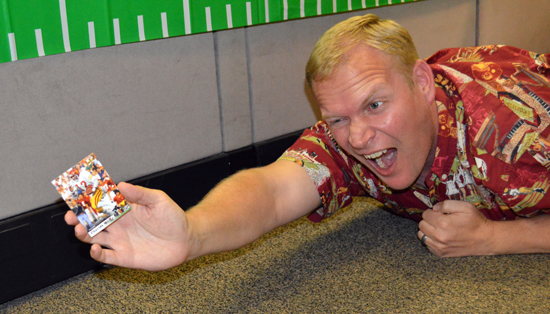 Good luck fans, this is your opportunity to live out your dream of seeing yourself on an actual Upper Deck trading card, don’t miss it!