Upper Deck is Searching for a Deserving Young Hockey Fan to Serve as a Draft Runner at the 2013 NHL Draft!

Upper Deck runs a variety of kid-focused programs throughout the year, but by far one of our favorites is the annual NHL Draft Runner Promotion. Upper Deck partners with the NHL to deliver an amazing experience to one special kid aged 10-13 around the NHL Draft and this season is no different!

One lucky 10-13 year old hockey fan can earn the opportunity to become Upper Deck’s 2013 NHL Draft Runner working for the team with the #1 pick; the Colorado Avalanche. The youngster selected will work directly with the NHL during the 2013 NHL Draft at the Prudential Center in Newark, New Jersey on Sunday, June 30. It is an experience where they will get to go behind the scenes at one of the most important NHL events of the year. For Sal Cerilli, Upper Deck’s last NHL Draft Runner, it was an experience he will remember forever!

All essays need to be received in by these locations by no later than Friday, June 14, 2012. Upper Deck will select one winner who best embodies the spirit of a true hockey fan to serve as the 2013 Upper Deck NHL Draft Runner. Five runners-up will receive a box of 2012-13 Upper Deck NHL Black Diamond. Upper Deck is excited to provide this once-in-a-lifetime experience to a young collector. Good luck to all those who participate! 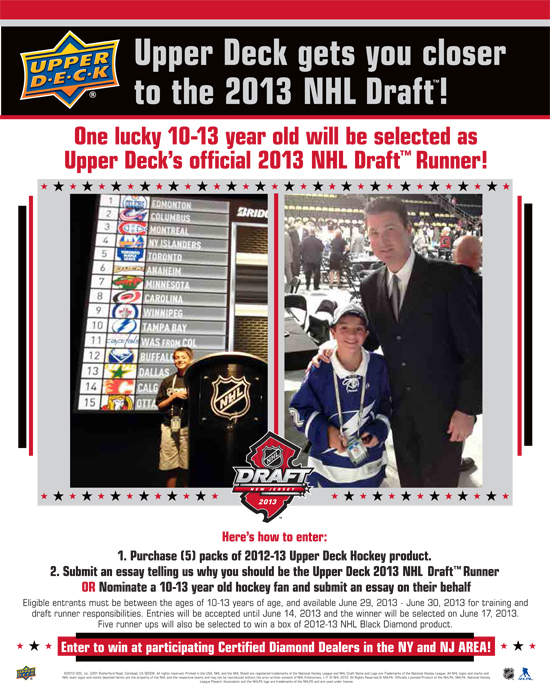 
when I submit an essay for a kid I want to sponsor to one these certified Diamond dealer stores, does the store then forward the essay to Upper Deck? How does this work?