Nominations Are Now Open for Upper Deck’s 2013 Father of the Year Promotion to Score a LeBron James Signed Promotional Poster!

Upper Deck loves to inspire fathers to collect with their kids and we have seen through events like National Hockey Card Day that these initiatives really do work to bring fathers and their children closer together. As Father’s Day approaches, most dads are hoping they would receive a unique collectible from Upper Deck Authenticated to display in their man cave or office rather than a tie or “World’s Greatest Dad” shirt. And we have the ULTIMATE signed memorabilia item up for grabs for the 2013 Upper Deck Father of the Year promotion. Check this out:

Upper Deck is looking for one great dad to honor as the Father of the Year for 2013. And the candidate we select will receive acclaim being featured on the Upper Deck Blog and Facebook page, bragging rights with an Upper Deck Father of the Year trophy and a jaw-dropping collectible from Upper Deck exclusive spokesman LeBron James. This promotional poster was signed the day after the memorable 27-game win streak came to an end and LeBron added an extremely unique inscription to this poster:

“Titles are more important than streaks!!”

It shows LeBron’s focus on keeping his eye on the prize which we continue to see as the 4-time NBA MVP continues his run for another championship during the 2013 NBA Playoffs. This piece will become the immediate talking point to whatever room it is placed in and is truly a piece of history. Here at Upper Deck we are happy to share it with a deserving dad. Upper Deck is offering up one memorable piece of signed memorabilia for the 2013 Father of the Year promotion!

To nominate a father you feel is deserving of the title (yes dads, you can nominate yourselves), please email us at UpperDeckMarketing@upperdeck.com with the subject line “2013 UD Father of the Year Nomination” with the following three piece of information:

Emails must be received by Monday, June 17 at 5:00 p.m. Pacific. Upper Deck will select the candidate that most skillfully conveys the fun of collecting with dad in their picture and written submission on Tuesday, June 18 to be Upper Deck’s Father of the Year. Five runners-up will receive an Upper Deck mail day with a free box of Upper Deck cards and some other goodies! There is no cost to participate in this promotion, entry is absolutely FREE!

To get an idea of the submission that won last year, meet Eric Kageyama, the 2012 Upper Deck Father of the Year. 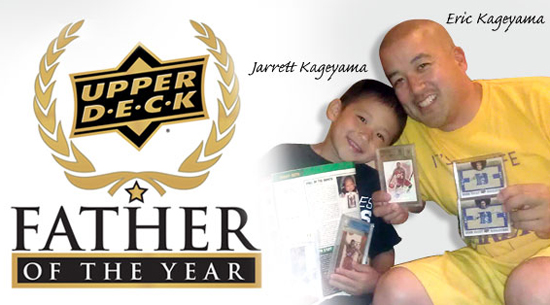 So what are you waiting for? Grab that dad you think is worthy, snap some photos of him collecting Upper Deck or enjoying Upper Deck Authenticated memorabilia with his kids and get those off to us along with the written submission! And even if you don’t win, take comfort in knowing that in reality you already have. These moments spent sharing the hobby with children will stay with them forever and Upper Deck is so very proud to be a part of that.

Feel free to share your images as you get them on Upper Deck’s Facebook page or on Twitter to @UpperDeckSports with the #FOTY hashtag. And remember you have through the Father’s Day holiday to get your images so make sure to give dad with some Upper Deck product this holiday and snap a photo of him enjoying it with the kids! Get that off to us that day or Monday and he could score big!