There is a lot to be excited about if you are a hockey collector. Everything Upper Deck is putting out for the 2012-13 NHL season is very limited and collectible. Upper Deck’s NHL trading card releases have additional value given the company’s exclusive licensing deals with Hockey Canada, Wayne Gretzky and Bobby Orr as well. And next season is going to be absolutely awesome with two huge rookie classes in one year’s worth of products.

Recently at the 2013 Las Vegas Industry Summit the NHLPA’s Adam Larry shared that they felt after the league and players came to an agreement, manufacturers would have really had a tough time delivering products of these rookies in time for new releases. He shared they were afraid it would cause late releases that ended up running into early season releases for the 2013-14 NHL season. Another concern was how difficult it would be for companies to acquire autograph content during a shortened season and how it could lead to high redemption rates in 2012-13 and 2013-14 NHL trading card products. These concerns would have not only adversely affected hobby shop owners and retailers, but collectors as a whole. So they made the decision to only allow holdover rookies from last season into the 2012-13 NHL products and make 2013-14 NHL season special for the trading card industry with a double rookie class. One of the big positives about the decision was that it is allowing Upper Deck to get ahead of the curve and plan for a memorable year or NHL trading card releases. We have already acquired a lot of autographs from rookies skating this season to reduce redemptions in 2013-14 NHL products to provide a better pack opening experience for our collectors. And every Upper Deck pack purchased next season will be a “double dip” type opportunity where fans can experience more rookie content than they normally would. It really will be a unique opportunity for fans and the perfect time to begin experiencing the hobby of collecting NHL cards if you are not already.

Existing collectors seem to be taking notice. Recently we asked a couple members of Upper Deck’s Volunteer Alliance who are thoroughly engaged in the hobby why they feel now is the time to collect Upper Deck NHL cards. Here’s what they had to say:

Christopher M: I think now is the time to collect Upper Deck Hockey because this new collective bargaining agreement paves the way for non-interrupted hockey for the foreseeable future.

Alex V: People should start collecting cards in the 13-14 NHL season because it will be like 05-06 all over again with a double rookie class. 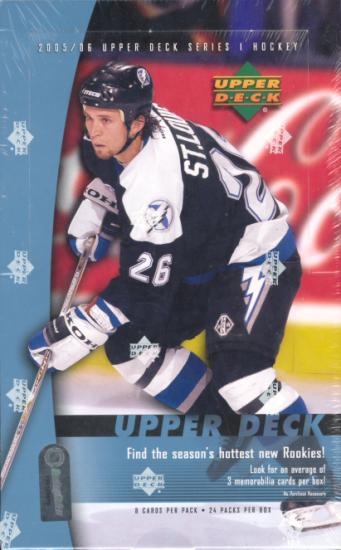 Sealed product from the last time we saw a double rookie class in the NHL is very difficult to find these days and it all carries a serious premium in terms of price.

In an effort to help create awareness for this special event, Upper Deck has been collecting video from leaders in the industry to provide some additional insight as to what the double rookie class means to collectors. Take a look at an interview from Wayne Wagner from Wayne’s Sports Cards & Collectibles talks about why the Edmonton Oilers are making this a good time to start collecting NHL cards:

Also watch as Sean Bennett from Pittsburgh Sports talks about the parallels between the upcoming 2013-14 NHL season and the 2005-05 NHL season:


Double rookie class good news! Only problem is there is no CROSBY…. Overall value should be better though.