Upper Deck and Fleer have put out a bevy of very collectible Jackie Robinson cards including trading cards that feature swatches of game-worn memorabilia and some that even have authentic cut signatures from checks or documents embedded in them from the iconic baseball legend.

To help celebrate Jackie Robinson Day, we thought it only fitting to share some images of some of our favorite Jackie Robinson cards produced by Upper Deck and Fleer over the years. There are a lot of compelling memorabilia cards that have been issued over the years, here are just a few that are worth adding to your collection if you can find them. 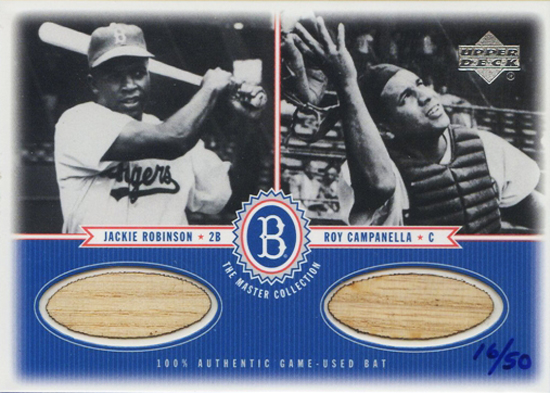 This card is from the 2000 Brooklyn Dodgers Master Collection sets. Some were broken down to sell the individual cards, but most were kept together and are in private collections now. 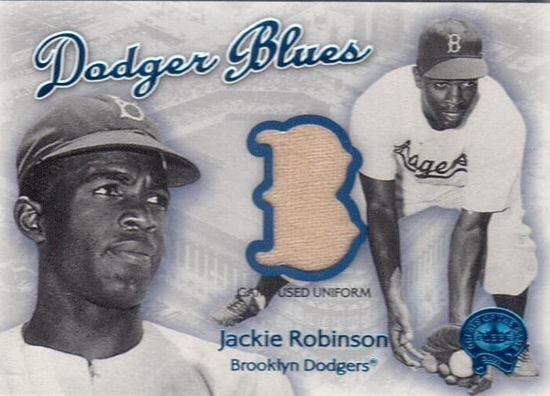 This Fleer Greats of the Game card from 2001 has some great photograph of Jackie. 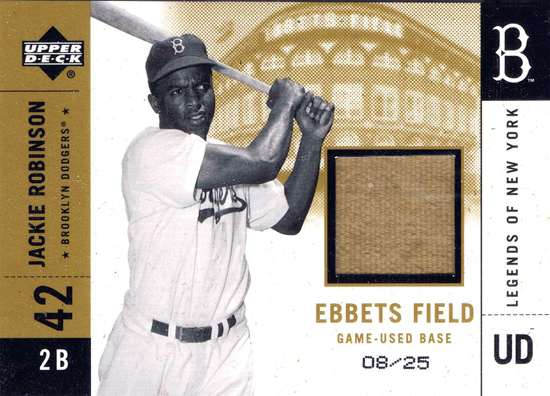 Ebbets Field was a big part of Jackie’s career and this unique card features part of a game-used base from the historic ballpark. 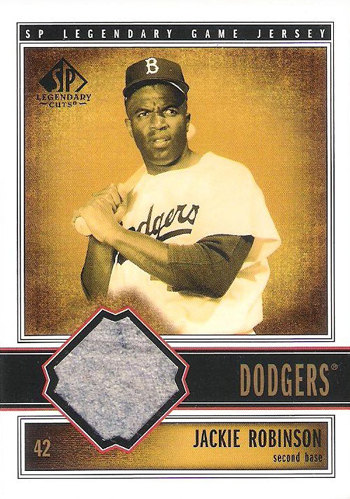 Some of the best Jackie Robinson cards can be found in Upper Deck’s SP Legendary Cuts products from over the years. 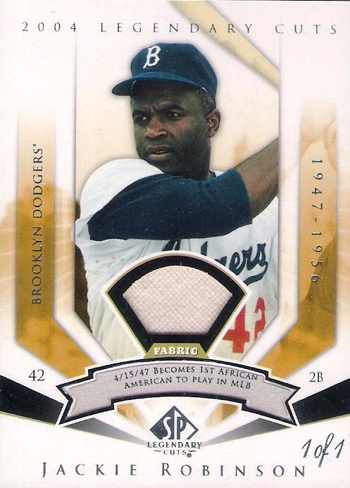 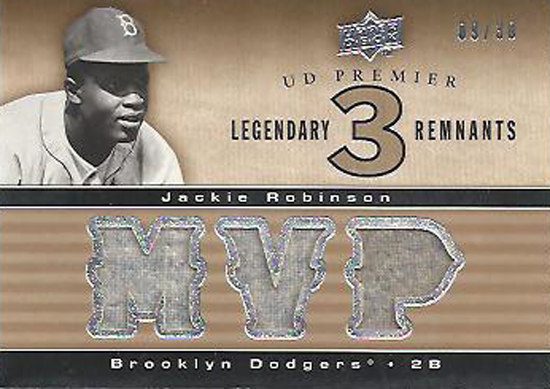 Some memorabilia cards have a key term used in the design of the card making for a very cool collectible. 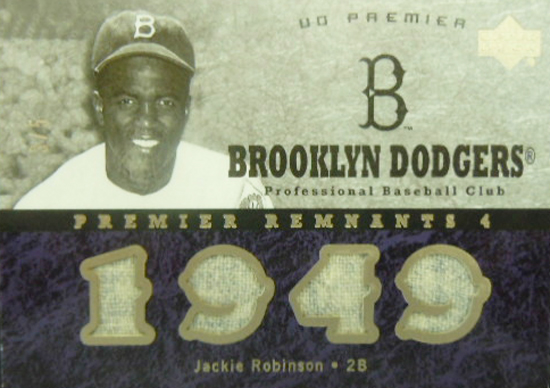 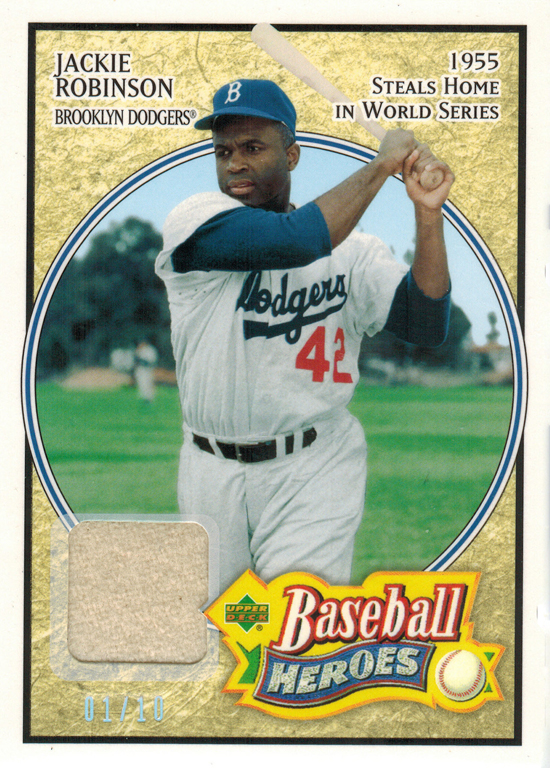 Jackie certainly was a hero to many and this card speaks to that! 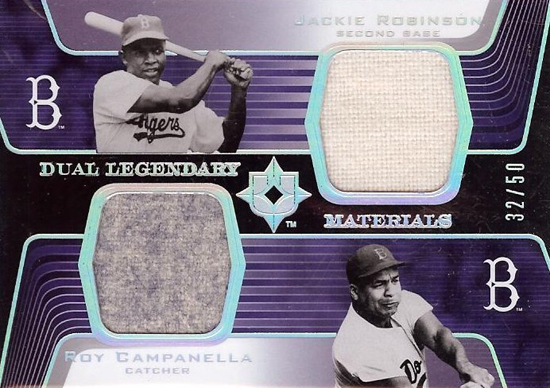 Some rare dual memorabilia cards were produced by Upper Deck that feature Jackie with former teammates and rivals.

Some of the most exciting cards Upper Deck has produced over the years are those that include an authentic cut signature of Jackie Robinson. These cards can be very pricey, but are certainly a sound investment. Here are some of the cards UD has put out over the last ten years and just recently in the Michael Jordan Master Collection. 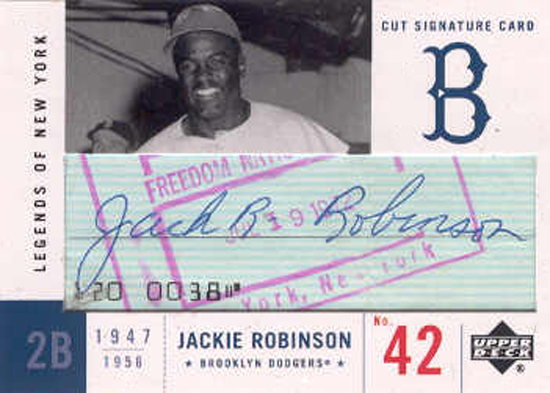 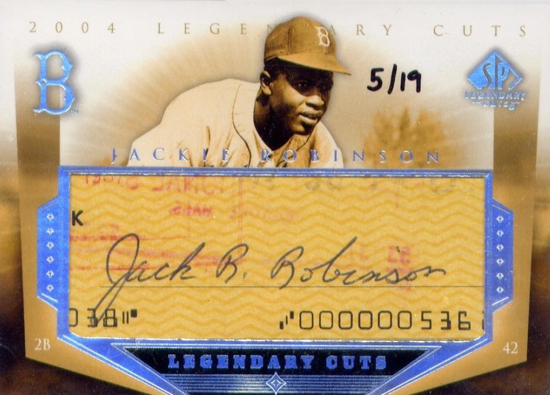 Some of the best opportunities to score authentic cut signature cards of Jackie Robinson exist in the SP Legendary Cuts set, especially from 2001 where there were 147 copies issues. 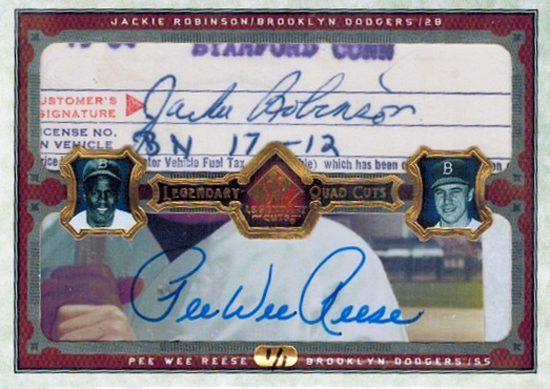 Multi-signed cut signature cards featuring Jackie Robinson are very popular. This one is actually a quad signature card and features autographs of Gil Hodges and Leo Durocher on the back.

This card from 2011 SP Legendary Cuts features eight authentic signatures from a variety of LA & Brooklyn greats including Jackie Robinson. It recently sold online for almost $10,000. 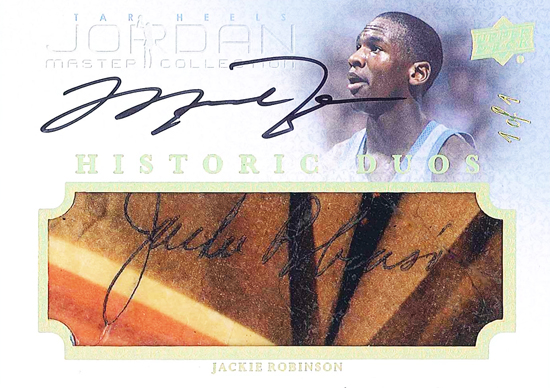 Here is one of the more recent Jackie Robinson collectibles Upper Deck has produced from the Michael Jordan Master Collection. Two iconic signatures on one incredible card.