This Girl is Gaga for Goalies: Collecting NHL Cards from a Female’s Perspective

Earlier this season I tuned in early to watch the Montreal Canadiens vs. the Florida Panthers. I like to tune in early to see them introduce the goalie matchup where they show both netminders (usually unmasked) so I can pick the one who is cuter and cheer for his team during the game. This strategy makes watching dozens of games for which I have no personal investment in the outcome suddenly more entertaining and recommend more women hockey fans give it a try. 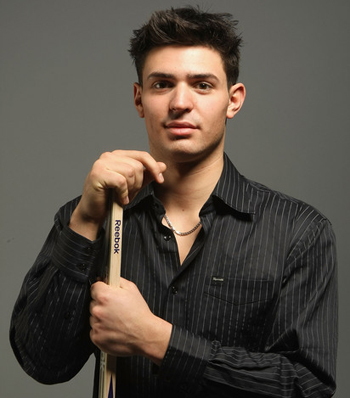 Analyzing the looks of each team’s starting netminder is a perfectly acceptable means of selecting a favorite to win the game. I’m having a hard time convincing my dad and some of his friends of this however. This particular matchup was a tough one, because Carey Price in my opinion is the best looking goaltender in the league (excluding some of the hot AHL goalies that get called up) and currently I have over 268 of Carey’s trading cards. I like Carry not just because he’s a hottie, but you never know what you are going to see from him on the ice. I’d like to see Upper Deck make a trading card for this memorable moment. 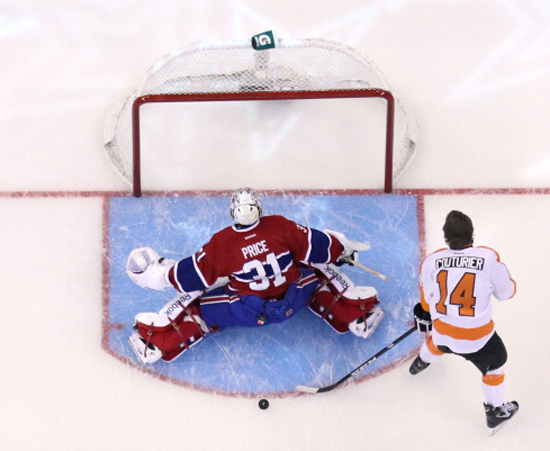 Couturier must have been so confused here.

Now on to the Panthers goalie; Jose Theodore. A few months ago, I saw a photo of Jose Theodore that made me rethink what he is all about. Since finding that photo I have collected 131 Jose Theodore cards to add to my cute goalie card collection. 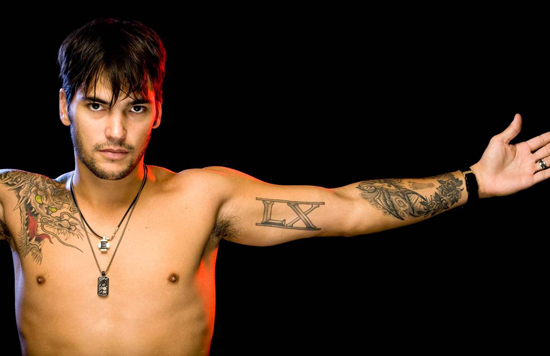 This game posed quite a dilemma for me and I wasn’t able to choose between Carey and Jose. I wasn’t surprised the game went into overtime with both goalies earning regulation shutouts. 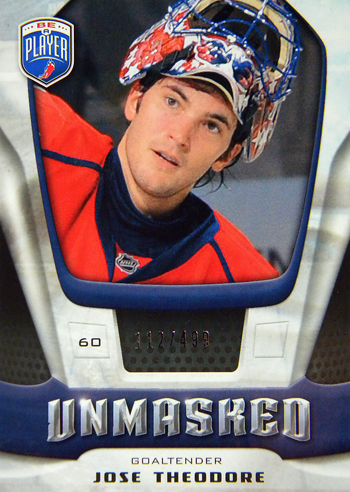 These were my favorite cards ever. I used to carry them around in my purse and show them to friends.

Some people laugh at my interesting selection criteria for picking favorite teams and what cards to collect. Right now I primarily just collect cute goalies and Taylor Hall (I know he’s not a goalie, but he’s still a hottie. One person who isn’t critical of my cute goalie card collection is my Dad. That’s not to imply he’s an aficionado of good looking goalies, he’s just glad I’m collecting something I enjoy. 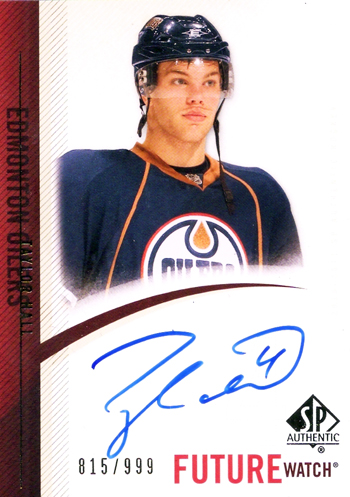 Honestly, how cute is he?

I was raised in my parent’s sports card and memorabilia store and was working the register at six-years-old. One question people always asked my mom and dad at the shop was, “What should I collect?” Their answer hasn’t changed in over 30 years, they say “Collect what you like. Buy what makes you happy and if the market takes a turn, your collection still holds value to you.”

I’m fairly sure this is why my Dad supports my collecting of cute goalies and even helps contribute to my collection. My mom on the other hand is glad I’ve taken up collecting something other than shoes, purses and Couture clothing, often expresses some concern. Especially when it comes to my collection of game-used goalie gear. 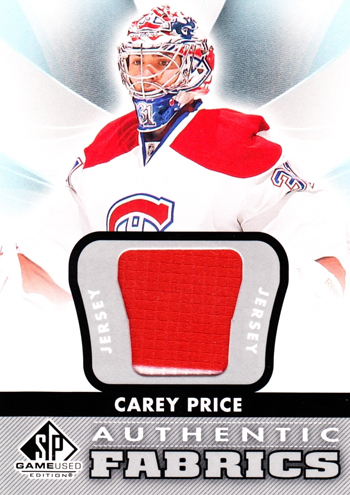 Cards today feature swatches of memorabilia worn by our favorite players. Talk about getting closer to the stars!

My mom threw a fit when I walked into her store and showed off my recently acquired game-used Bryzgalov autographed goalie pads, especially after my previous purchase, an autographed game-used blocker & trapper set from Khabibulin. 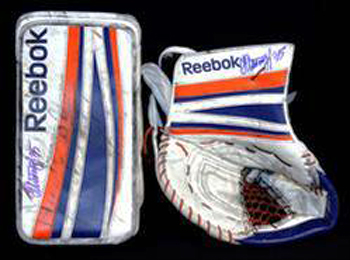 She’d much rather I collect cards with game-used goalie gear and I’ll admit, she did have a point about me not having an appropriate place to keep Bryz’s pads right now.

I do get some slack from my dad and his friends about my Marc-Andre Fleury collection. Apparently we’re not too fond of the Pittsburgh Penguins in the Philadelphia area, but I don’t think inter-divisional rivalry impacts how hot Marc-Andre is. My Dad won’t even let me wear a Fluery shirt to hockey games. I explained I don’t want the Penguins to win the game, I just want Marc-Andre to know I think he’s cute. This issue has yet to be resolved. 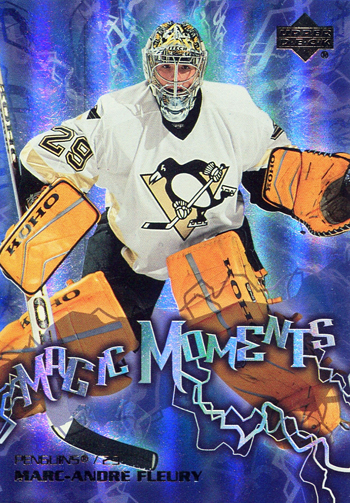 Jersey Girl runs the goalie stick blog and is always on the lookout for cards of her favorite goaltenders.

This is why guys don’t like girl fans. It’s not about who’s cute it’s sports not the Entertainment channel. Lame

Thanks for reinforcing the stereotype that all girl fans care about is the player’s looks.

Its already hard enough to be a collector in a male dominated market without articles like this.

Not all female collectors are like this! I collect for the same reasons anyone collects, just because I’m a woman doesn’t change the reasons.

We appreciate the feedback we have recieved on this story thus far and want to apologize if any female collectors feel offended by it. This collector certainly is not indicative of all female collectors, but her story and way of collecting is unique and we wanted to share her story. The one thing we know about collectors is that they are all very different and those differences should be celebrated, not disparaged. There is a wonderful story in the midsts of her adoration of certain players of a family collecting and enjoying the hobby together. I personally felt the message of, “Collect what you like. Buy what makes you happy, and if the market takes a turn, your collection still holds value to you,” was important to share with fans.

On this blog we have made it a habit to profile all different types of collectors from those trying to enjoy the hobby overseas, to members of the military collecting, to kids with Autism enjoying the hobby. The wonderful thing about collecting is that all are welcome. This story reflects one girls opinion on why she enjoys the hobby and I appreciate that she took the time to share. If you are a female collector who enjoys the hobby differently, or anyone else who has a different reason to share why you enjoy collecting, I would love to help share your story. You can email me directly at chris_carlin@upperdeck.com

The writer’s collecting focuses, no matter how shallow they are, aren’t the problem here – she can collect whatever and however she wants.

Instead, you decided to reinforce the “woman only follow sports to check out the guys” stereotype.

Your story “for the female NHL fans out there” struck a sour note, and your efforts to backtrack on Twitter reveal your company’s small-mindedness.

Learn something from this! And please use some tact before you post something like this again. The pageviews aren’t worth the shredded credibility.

It’s crazy that some people are blasting this young lady for the way she collects, while it is not the way I collect I still respect her opinion and how she collects and the story. This is America after all …

I don’t have an issue “how” she collects she has every right to do as she wants. But you can’t ignore the fact this comes across offensive to collectors in general yet alone the female collectors who do so.

I am just glad to see her collecting!

I read and interpreted the story as ONE collectors choice/style of collecting, as it should be interpreted. Not once did I think it somehow generalized all female collectors as collecting simply for superficial reasons like a players appearance. I can also absolutely relate to her story as my girlfriend “confiscated my “UD Heroes Derek Jeter auto/jersey card simply because she thinks Jeter is hot and likes the idea of carrying around in her purse a card that he actually touched that also has a piece of clothing he really wore. (she did ask me if only the jerseys were used or if they also used pants for the relic part of the card to which I replied “I have no clue, but if you want to think that you have a half square inch piece of the butt section of Jeter’s uniform go right ahead”) I too, like the editor, found the message of collect something that is meaningful to you that way if the market changes you still have a collection that you really enjoy because that is what collecting is all about. Just as with anything else and especially with trading cards, they are only worth what another person is willing to pay for it. That has changed a little from when I first bought my first pack of 1987 Topps as a 5 year old with the introduction in the 1990’s of serial numbered insert cards making a certain portion of the supply limited thus making it more valuable, but it still comes down to the core element of being a fan of the sports and players that you collect since that is the reason just about every collector first bought a pack of cards because lets face it, as an investment sports cards are about as stable as a 1990’s dot com stock. (how much do you think McGwire’s 70th home run ball would sell for now compared to the 3 million Todd Mcfarlane paid for it, even the T 206 Wagner has been touched up in an attempt to increase its quality and value with disastrous results so the point of the article is an excellent one) In the end I see the article as a single persons way of collecting cards, and a damn funny and well written piece. Give Upper Deck and the writer a break and just enjoy the story that she took the time to write.