Can Trading Cards Help Kids with Down Syndrome? Some Parents Say Yes!

I collected cards as a kid and spent hours with them all sprawled out on the floor, yelling at anyone who dared walk into the living room. I look back fondly on those times where I organized, sorted and even priced cards in my collection. Collecting taught me a lot and it was a fun way for me to get closer to my dad and the sports he loved.

In my time working with Upper Deck it has been great to see the role that trading cards have with parents and their children coming closer together. At Upper Deck we try to interact a lot with our fans and through that we became aware of how Autistic kids and children who have Asperger’s Syndrome enjoy collecting as it takes them to “their happy place.” I thought that was really cool and wondered if trading cards could help any other special needs kids, but didn’t actively research anything as I became busy with normal job duties.

And then came National Hockey Card Day which is a day in particular where Upper Deck encourages families to collect together as we provide free hockey packs to fans throughout the U.S. and Canada. We asked fans to share images of their adventures during the festive day and one photo stood out to me in particular that just kind of warmed my heart. I reached out to the mother of this collector to see if we could put together a care package together for him and she happily agreed. We began some back and forth dialogue and I found out more about her son Brandon and his fledgling collection.

Here is what his mother shared:

“I am using the cards to teach him the players, putting names to faces and their numbers. So far he likes to flip through the pages and stare at each card like he’s taking in all the detail. He will say the players he knows (Quick and Kopitar) like he was at the game. I use things like that to help him remember. Quick because we have the empty Quick Championship milk bottles so I show him Quick on the bottle and then Quick on the card where he’s holding the cup in the air. 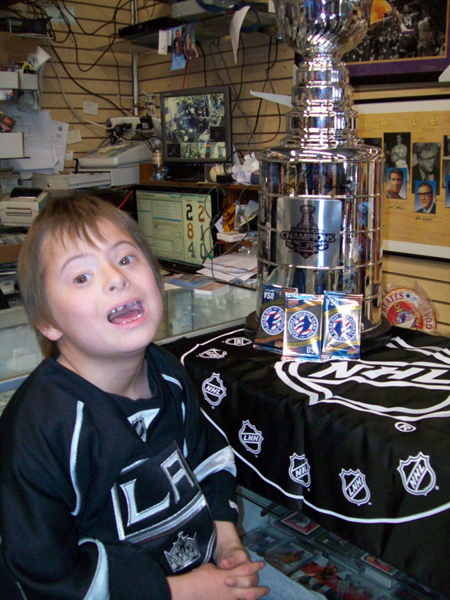 Brandon has a real love for hockey and is developing an appreciation for hockey cards.

“It’s the hands on with the visual and verbal that gets his brain ticking. Once he saw the Stanley Cup in person and was able to touch it, that’s when he really started paying attention to the sport. These cards are another piece in the NHL puzzle for my son. It helps him bring it all together.”

And then we heard about another collector with Down syndrome.

“Shannon’s brother Brian was a long time collector and Shannon started when she was about 8-years-old. Since she grew up in Anaheim it naturally made sense she began collecting trading cards of Angels players. When she was in elementary school she would always take her baseball cards when it was her turn to at show & tell. She also went to card shows and got autographs of several players. 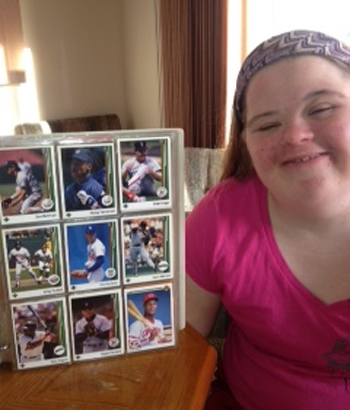 Shannon grew up with Upper Deck Baseball cards and still has her collection!

“This hobby helped her interact with others. Her brother took her to see the Angels when they were in the World Series with the Giants. She was really jazzed when they won. At 28 she still likes to go see softball and baseball at her former high school and may go to an Angels game once in awhile. Today she is more into her acting as a career, but she still has her cards and other baseball memorabilia with fond memories of them.”

Today, Thursday, March 21st is World Down Syndrome Day. It is a day to raise awareness about Down syndrome and celebrate how special many of those are who have it. Most everyone knows a family who has someone in it with Down syndrome. We encourage you to share some trading cards with them. The results may surprise you, but more than anything you may find it to be another bridge to help them relate to sports, the world and you!

If you have any stories as to how trading cards have helped someone you know who has Down syndrome, we would love to hear your story!