Upper Deck Authenticated staff recently witnessed a signing session with LeBron James where he signed a different pair of sneakers. It wasn’t the first time LeBron James has signed a pair of game-used shoes with Upper Deck, but these shoes were different. 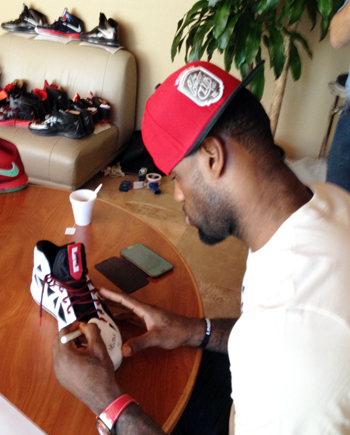 LeBron James adds his autograph to a very special pair of shoes during a UDA signing session.

The shoes came from a game that wasn’t exactly competitive where the Miami Heat imposed their will on the Washington Wizards taking the contest 102-72. In the game, LeBron James led the Heat with 23 points, 10 rebounds and five assists. A solid performance, but not really an ultra-memorable evening for the league’s reigning MVP. Except for those shoes… You see, before the game he added inscriptions to the LeBron Flywire Nike shoes. LeBron marked “Newtown, CT” in several different places on them as captured by the AP photo below.

It was before the game where the team took part in a moment of silence and brought their own kids out on the floor as a show of support for victims in Newtown, CT. James said, “Basketball, this is nothing. These games are nothing compared to when you have a tragedy like that. It sucks that sometimes you need a tragedy to put things back in perspective, to appreciate what you have. But it does that to people. It’s unfortunate that you have to have something like that to understand what’s really important and some things that aren’t important at all. Family is the No. 1 important thing in life.”

So as LeBron solemnly signed the shoes, he added his signature to one pair and a new inscription to the other pair, “vs Wizards 12/15/12 Never forget!!” 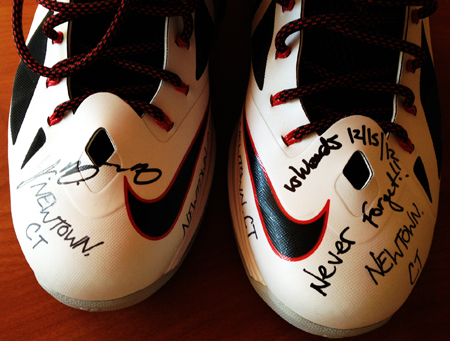 LeBron sent that image out an image of the shoes through Instragram and to his 7.5 million followers on Twitter. 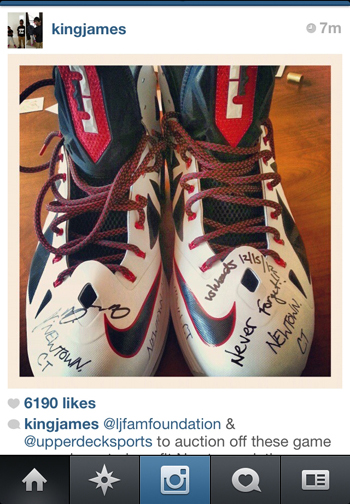 LeBron James shared an image of the shoes with millions of his fans today.

This is not an auction where Lebron James or Upper Deck Authenticated saw a dime however. All the proceeds from the sale went to victims of the tragedy in Newtown, CT through the LeBron James Family Foundation. 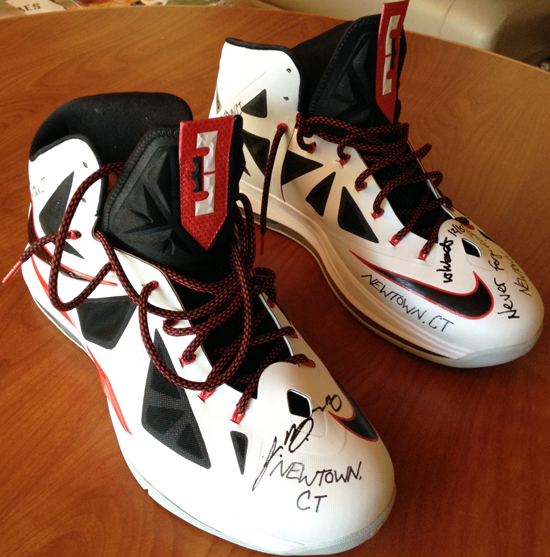 How much are these shoes worth?

On these shoes, LeBron James said, “The tragedy in Newton affected all of us. It is inspiring to see how so many people continue to come together to support the families. I inscribed ‘Newtown, CT’ on the shoes I wore in the December 15, 2012 game against the Washington Wizards after the tragedy. I signed the shoes with my partners at Upper Deck Authenticated which will be put up for auction in April through SCP with all proceed benefiting the Newtown, CT victims.”