I don’t remember a lot of things from my childhood, as I imagine would be the same for most people. Of the memories that made the cut however, was the time my Dad spent an entire morning calling different card shops in our city to try and find the 3 cards I was missing from my set. I’m guessing I was about eight years-old at the time and most likely took for granted, as children often do, how much work went into driving to the different shops that day in order to pay for those cards. I definitely remember the excitement of sliding those cards into their places in my black binder. The feeling of accomplishment at such a young age was a great one and even at such a young age, I could tell my Dad appreciated how special that was for me.

As the years went on, I learned to love everything about collecting cards. I remember hanging out daily at the local card shop until they finally asked if I wanted to work there; for cards, of course. It was my first job and how could you not love working in a card shop? There was nothing quite like the anticipation of an unopened pack of cards. Wondering whose card would be inside as I carefully popped the upper middle open like a bag of chips, so not to risk damaging the goods inside. I don’t remember exactly when or why I stopped collecting but I’m guessing it was because of some combination of age, cost, responsibility and time. Or maybe it was girls…

When I heard about Upper Deck’s National Hockey Card Day, I immediately got a rush of excitement like I haven’t had in a long time. You see, my son is now at an age where I can introduce this hobby to him to see if he likes it. I hurriedly packed him into the car and passionately talked his little ear off as we drove to the local comic book shop. As soon as we walked in the door he was greeted with two free packs of hockey cards and that’s when I saw the excited look in his eyes. I’m sure I had flashed that look a few hundred times in my collecting life and I knew, at that moment, he was hooked. 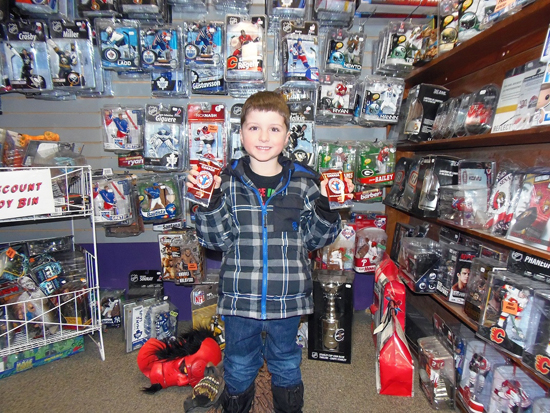 Seeing your son crack open their first pack of Upper Deck hockey cards is a special moment for a father.

I know he’s still too young to develop a passion for it like I did but I was so excited to see how happy he was. I still have all my old cards stored in my basement and this trip inspired to dig them all out to show him how many Daddy has collected. My prized possession? A set of 1964 CFL cards from Post cereal, handed down to me by my father once he decided I was ready for that responsibility. The set is one of the few possessions I have left to remember him by, but it is such a great memory that I carry with me. My son will inherit these cards someday whether he decides to become a collector or not and I’ll be sure to share all my stories with him as my father had done with me. To me collecting is a family affair and I’m thankful for events like National Hockey Card Day where I can play a small role in teaching the next generation of collector how much fun this hobby can be. 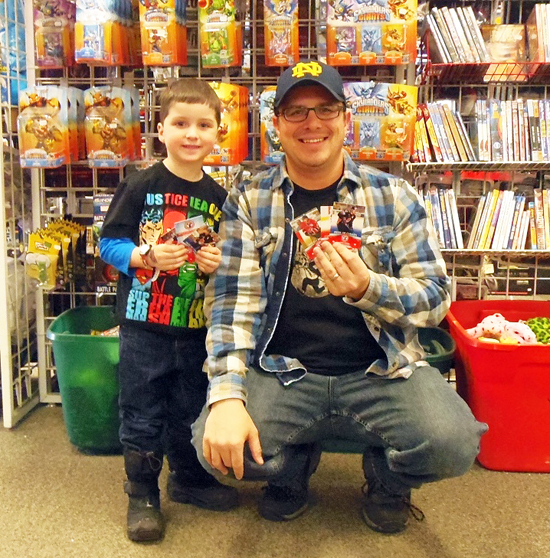 His first card, by the way, was a Sidney Crosby Team Canada card. Not a bad way to start off a collection. Thanks to Upper Deck for giving me the chance to relive some awesome memories of time spent with my father, while also creating brand new memories for me and my son. Collecting doesn’t have to be about what your cards are worth because the moments you spend collecting them with the people you love are priceless. 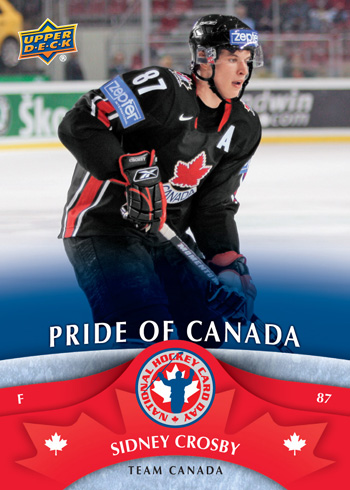 A great start to a new collection!

Chris Read is the voice behind Canadian Dad. He is a father, writer, brand spokesperson, and advocate for Dads everywhere. Chris writes about parenting for several sites including the PTPA, the Children’s Hospital of Eastern Ontario, and Life of Dad. Chris is also the co-founder of the Gil Read Memorial Foundation, which helps less fortunate kids compete in sports.


It’s nice to be able to share and pass on hobbies which in many ways are trivial, but also some of the most treasured memories and artifacts from our past. My 9 year old son and I are baseball fans, and we’ve been working on autographs from our home team for a couple of years. It’s something we do together, we coordinate, and we pore over the spoils. Together. Having something your both can collect, regardless of what it is, helps to create a special bond that we as parents can only hope for. That’s the stuff of true parenting joy.


My son’s still *just* too young for sports cards. I can’t wait to start buying them and letting him take them out while we watch games together.