For two seasons now, Upper Deck has been including an insert set called “Day with the Cup” into the company’s flagship hockey trading card products. In the set Upper Deck profiles how the Stanley Cup Champions their “day with the cup” and it has been very popular with collectors. The 2012-13 NHL Upper Deck Series One version of the set features 28 subjects (27 of those members of the LA Kings) and the cards command some significant values based on what we are seeing from online sales.

The 28th subject in this season’s set is not a member of the LA Kings. Rather than a player, it is the “Keeper of the Cup” himself; Phil Pritchard who has been deserving of his own Upper Deck card for some time now. We have a great relationship with Phil and one of our staff members (Dianne Hatley) recently spent some time with Phil and the rest of the Hall-of-Fame crew in Toronto. Dianne shared how the passionate hockey fans that work here at Upper Deck have been very depressed by the current hockey situation and with that Phil came up with an idea to help improve employee moral. On his next tour to California, he said he would try to bring the Stanley Cup by the company’s head office as a thank you for Upper Deck’s support of the NHL and the Hockey Hall-of-Fame. 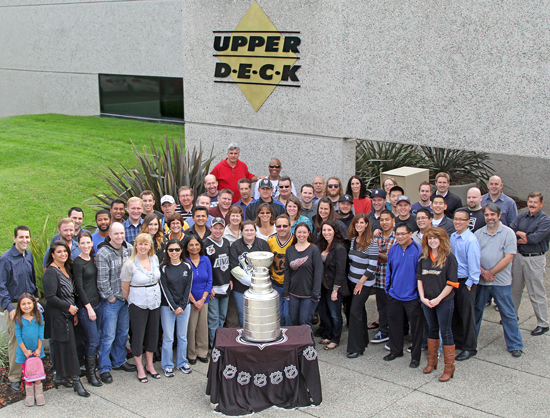 A large group of employees at Upper Deck’s corporate headquarters in Carlsbad, CA pose with the Stanley Cup.

Today was the day Phil Pritchard was able to keep his promise by bringing one of the greatest trophies in the history of sports to Upper Deck’s corporate headquarters in Carlsbad, California. Upper Deck staff were allowed to have their immediate family visit to get a picture with Lord Stanley’s Cup. This was truly a special moment for employees who don’t get to make it out to trade shows where the Stanley Cup is on display. Being able to share that moment with their families meant that much more. 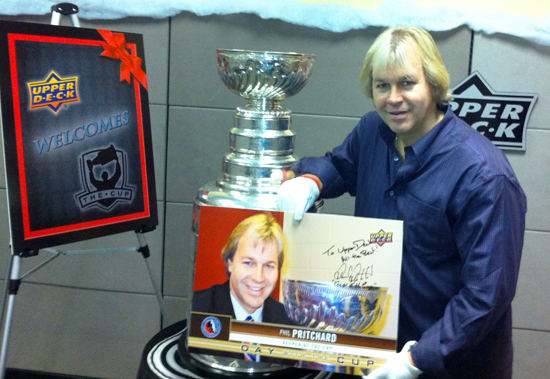 Phil Pritchard signed a blow-up copy of his new Upper Deck ‘Day with the Cup’ trading card during his visit to Upper Deck headquarters today.

Upper Deck would like to thank all our friends at the Hockey Hall-of-Fame and especially Phil Pritchard for helping to bring Upper Deck staff closer to the game we love. The Upper Deck team is back to work now with ear to ear smiles, excited to continue bringing collectors the best hockey collectibles on the market! 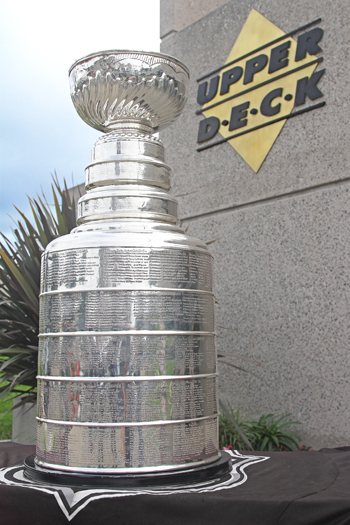 Love to be standing by that cup and bust a box of UD Cup for some old fashion mojo!