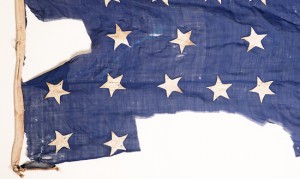 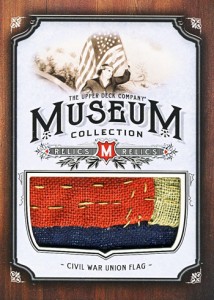 Kudos to you Rob! I have been a Civil War buff all my life and I thank you for sharing this piece of history with us. No matter what you do there is always going to be detractors. I hope I can get one of these to put with all my other Civil War collectibles I have found metal detecting and that have been passed down through my family. Just to imagine of my ancestors may have fought under this flag and I have it my hand to pass down to my generation is awesome. Thank you again!

nice job to all at upper deck. i agree, that this was a good way to presurve what was left of a historical flag. now, just to aquire one.

i think it is a nice card,i am readin alot people dislike wat u at upper deck did but if it was gettin cut up any way wat is the faul….but i do feel sorry for the men and women who faught for this country and would never want to direspect them,,,thank u for ur service..but i like the card..sorry

At first hearing, this sounded horrible. But after reading that the flag was already mostly gone when Upper Deck got it, it seems like the only thing you can do with it is spread around what’s left, with a detailed history of the flag on the card. It was a tough choice, but it’s better than leaving it in a drawer in the basement of a museum.
And since it’s only a Yankee flag anyway, it’s not so bad. 😉

I believe that this was a great way to Honor and preserve the remaining fragment of this Flag. I also hope that at some point I can add one or more of these cards to my collection. Thank You.

Does anyone know how many of these cards were made??