If you like movies, comic books, collectibles, video games, or anything else really that has to do with pop culture, Comic-Con International in San Diego, California is the biggest event of the year. Literally hundreds of thousands of people descend on San Diego every year to enjoy the biggest meeting of pop culture fans in the United States. There are movie stars, exclusives to get your hands on, and more comic books than you can count! Upper Deck was on hand to participate in the excitement of Comic-Con and show off some of our exciting Marvel products to the people who know Marvel and comic book culture the best.

Some of us working the Upper Deck booth joined the excited attendees on trolley rides through the streets of San Diego on our way to the convention center in downtown San Diego. Comic-Con is so packed with people that getting a parking spot nearby is out of the question, so public transportation is the way to go. When you arrive and the trolley doors open, they reveal a sea of people as far as the eye can see. All of downtown is taken over by Comic-Con and in every direction you see giant banners, people in costume, and all kinds of attractions before you even get inside the building. 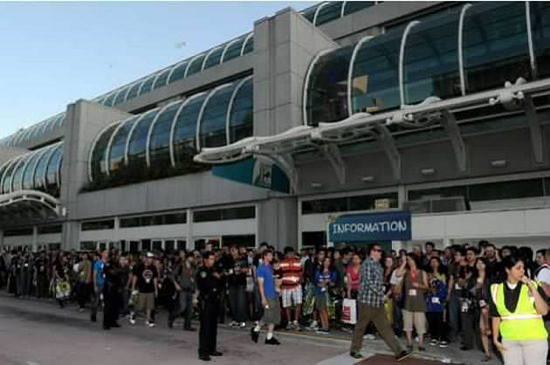 Outside Comic-Con is just as busy as inside, especially before the hall opens and people are itching to get going!

One neat perk of working at Comic-Con is getting past the masses of people waiting to get in and enter the exhibit hall early to set up. It is a rare and very exclusive privilege to see what Comic-Con looks like without the huge amount of people everywhere. The time is limited however as before you know it the PA announcer in the sky announces that, “Comic-Con is now open!” and within minutes a once peaceful hall is overrun with excited fans scrambling to get to their destination. 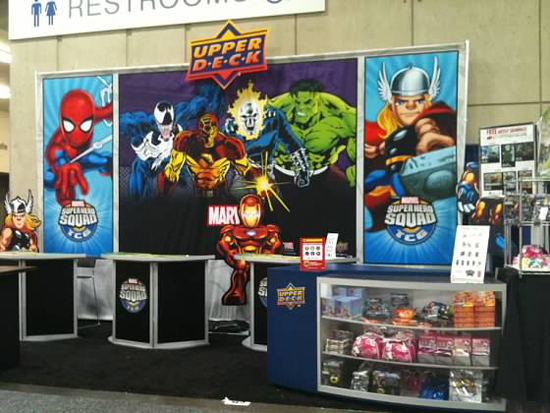 Only early in the morning before the hall opened could you see the Upper Deck booth when it wasn’t packed with people. 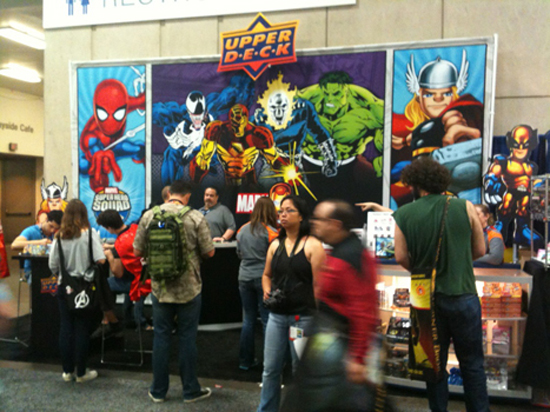 The doors open and the people come flooding in. 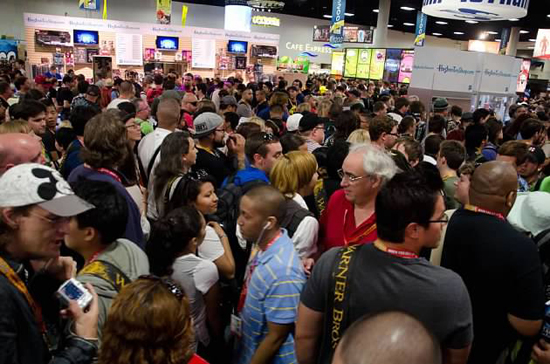 Before you know it it’s hard just to move around, the hall is packed!

Every booth goes from totally empty to full of people very quickly and the Upper Deck booth was no exception. We had a lot of exciting things for attendees to check out including demos of our new Marvel Super Hero Squad trading card game. Fans could also get their hands on our Marvel Slingers toy as well as Upper Deck Entertainment products like Hello Kitty and Marvel movie trading cards. We had over 1,000 people try out Super Hero Squad during Comic-Con, and it was a huge hit. That might have had something to do with our nifty super hero capes you could get for free with a demo. By the end of Comic-Con they were all over the exhibit hall and we had lots of people coming by the booth wondering how they could get a cape for themselves after seeing someone else wearing one. Throughout the conference fans could also get free autographed prints of some of their favorite artists through our Artist Signing Sessions. Some of the top artists who have created trading cards for Upper Deck Marvel trading card products stopped by the booth to sign their Comic-Con exclusive Upper Deck prints for free! 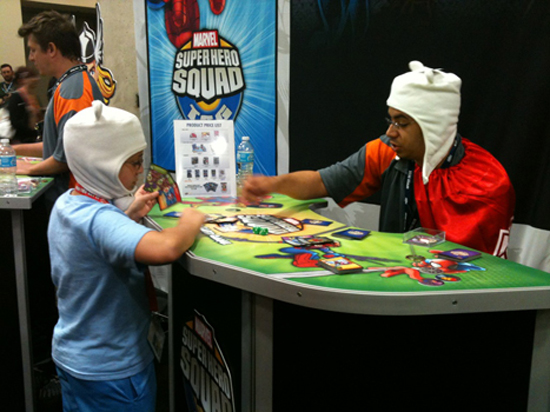 The Super Hero Squad demos were a big hit and the tables stayed full all day every day. 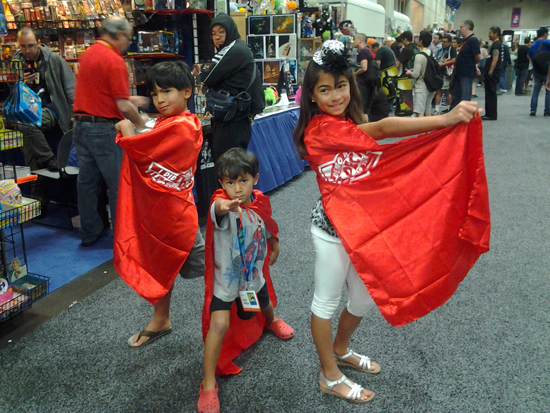 The free Upper Deck capes were a huge hit and you could see people wearing them all over Comic-Con. 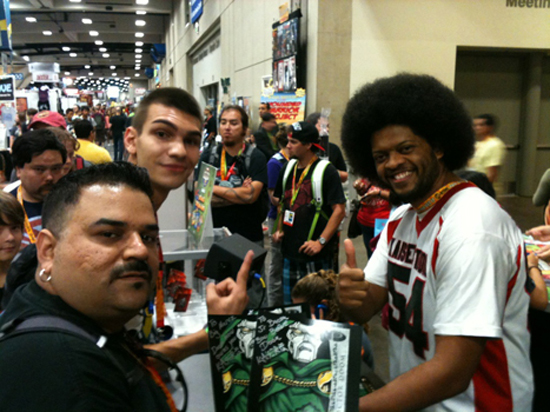 A big part of going to Comic-Con is all about the exclusives. Tons of companies produce special items that are only available for purchase at Comic-Con. Those people who rush into the exhibit hall at the start of each day are often heading to their favorite company’s booth to grab these exclusive items before they sell out. And boy do they go fast! Many companies set aside a limited number of these exclusive items for each day of Comic-Con, and the hottest items sell out within minutes of the doors opening. Upper Deck was featuring a great excusive featuring a commemorative coin set featuring the Marvel Avengers. Those who chose to buy the entire six coin set got a bonus Loki coin that was not available for sale. All the coins were very limited but the Loki was the rarest of all. People were taking advantage of this great exclusive all through the conference and we sold out completely by the end of Comic-Con. 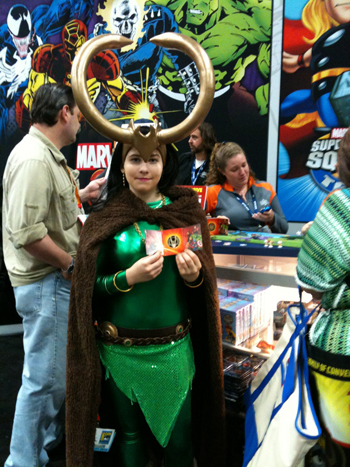 Loki actually stopped by the UD booth and had to have one of the super limited Loki coins! 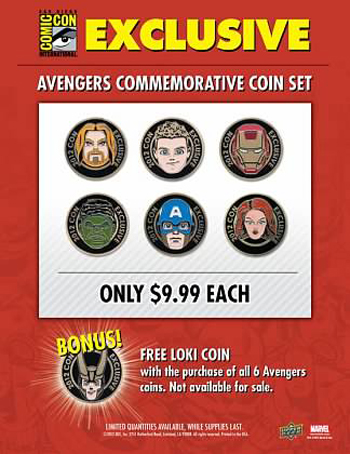 We sold out out of coins for the entire show so those who grabbed some were very lucky!

Comic-Con is a wild and crazy place, but it’s also one of the most exciting experiences you can ever hope to have if you love comic books and pop culture. There are things to see and do everywhere. You never know what you are going to see whether it’s a crazy costume from your favorite video game or movie or maybe a famous person wandering the hall just being a fan like anyone else. It is an event everyone should try to get to at least once in their life, and I really enjoyed working at the Upper Deck booth meeting all the great Comic-Con fans.

While you can’t get any Upper Deck capes, coins, or autographed artist prints if you didn’t make it to Comic-Con, you can still pick up some of the products we had for sale at the conference in our Upper Deck Store. Also stay tuned to our Facebook and Twitter pages for updates on the latest Upper Deck Entertainment products including Marvel Premier, the first ever super high-end Marvel trading card product that was announced just last weekend at Comic-Con. If you want to see what Upper Deck has in store for Comic-Con 2013,you’ll just have to book your ticket to San Diego now! 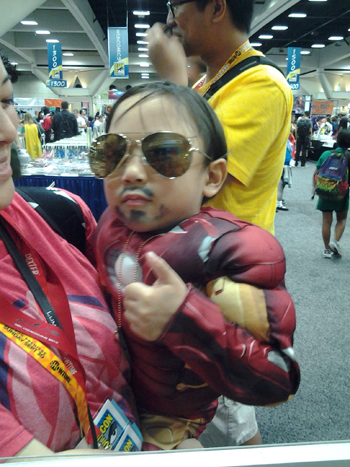 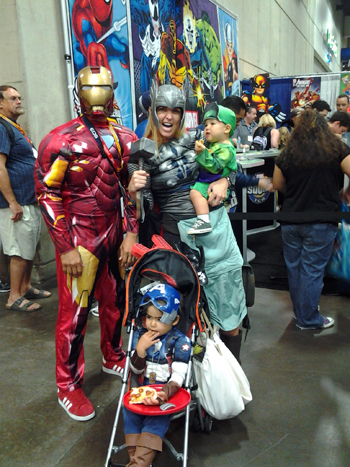 So did the Marvel Avengers family!