The game of lacrosse is in the midst of an exponential growth in the United States, and the impact continues to be felt across the sports landscape. The attendance at the NCAA Men’s Lacrosse Championship is up almost 300% from two decades ago and the game has done what the Manifest Destiny did some 200 years ago by rapidly sweeping west across the United States. While the collegiate game has generated a larger fan base than Major League Lacrosse, Upper Deck plans to bridge that gap.

Collegiate lacrosse fans can now follow their favorite college athletes as they transition into professional competition. Upper Deck’s Premium Game Used Jersey Cards are a part of the company’s pioneering effort to bring the game of lacrosse into Upper Deck’s sports arsenal. The future is as hopeful as the game itself: where the game goes, Upper Deck will follow.

Upper Deck has already made a splash in the lacrosse world, gaining some publicity from Inside Lacrosse, the national media leader in lacrosse coverage. 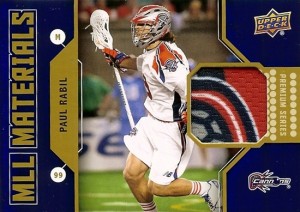 Paul Rabil has helped pioneer the game of lacrosse on and off the field. Upper Deck hopes to do the same.

The 2012 Tewaaraton award for Best Collegiate Lacrosse Player was won by Colgate Junior attackman Peter Baum. This wouldn’t be newsworthy except for the fact that Baum was the first player not born on the East Coast to win the award. Before his senior year, the Oregon native will be a participant in the Major League Lacrosse Draft and should be highly sought after by the professional franchises. Baum is a mere microcosm for the growth of the game, one that is exponentially expanding across the nation and at all levels. With the arrival of Baum on the national scene, Lacrosse has officially become a national pastime in the United States. 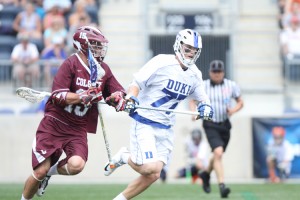 Where will Colgate Attackman Peter Baum land in the MLL Draft?

So where will Upper Deck go next? Feeding off of the game’s growth and the fans that generate its popularity we want to ask you, our fans, what do you want to see next from Upper Deck Lacrosse? Signed Jerseys? Game Used Memorabilia such as cleats, jerseys, and equipment? In what ways do you think the game will be most popular off the field? Let us know in the comments and you could help inspire the next great Lacrosse trading card or piece of memorabilia.

One thing is for certain. The growth of lacrosse has no end in sight.

The pictograph show the past, present, and future of the booming game


FINALLY! I’m glad to see that people are starting to take notice of the sport! My friend and I have been dying for more lacrosse products to start up!

I think it would be neat to have stick cards. It’s not uncommon for a player’s stick to break, so why not collect the broken one’s, and cut those up? If you haven’t already seen some of the designs on sticks, you need to!


It is my hope that Upper Deck returns to the MLL league-wide card set like that of the boxed set from 2010. There are so many talented players worthy of their own card. Yes, it is nice that “Goodwin Champions” features select players like Matt Danowski and Paul Rabil, or that “World of Sports” has included 45 past and current stars the past two years. It would be much better, though,to produce cards as U.D. does for MLS. I still see players after games signing cards from the 2010 set. I often hear people at souvenir booths asking if there are player cards or photos for sale, only to hear “no.” Cards will help the growth of the sport and visibility of the players. And please put portraits on the card back, minus helmets. This will make the players more recognizable. Finally, have someone with knowledge of lacrosse write the card backs. Those for the “World of Sports” sets were poorly done, in my opinion.


Upper Deck definitely should issue a full MLL card set. Memorabilia cards are vastly overrated. What is needed are individual cards for most if not all players. MLL players traditionally remain after games and sign autographs. These cards would go over well with both kids and collectors. I also feel having some cards tracing the history of lacrosse should be in the set. All-time greats – college, indoor, and MLL should be considered for inclusion. The set could be educational in nature, in addition to spurring fan and collector interest. And I agree that the backs should feature portraits and interesting information.